So the underwater ladies are faceless and partially dressed in a way that could be perceived as sexualizing if you wanted to poke some bubbles, but they are roundly pointing at more. The depth of this work speaks to the photo shoot (whose only real control he claims is the reflectivity of the water above his models; the rest, he almost sounded helpless discussing,) and then the practiced ritual transfer using heat and pressure to burnish a photographic image onto wood, and later going back in with pigments “to give it deeper saturation and life.” 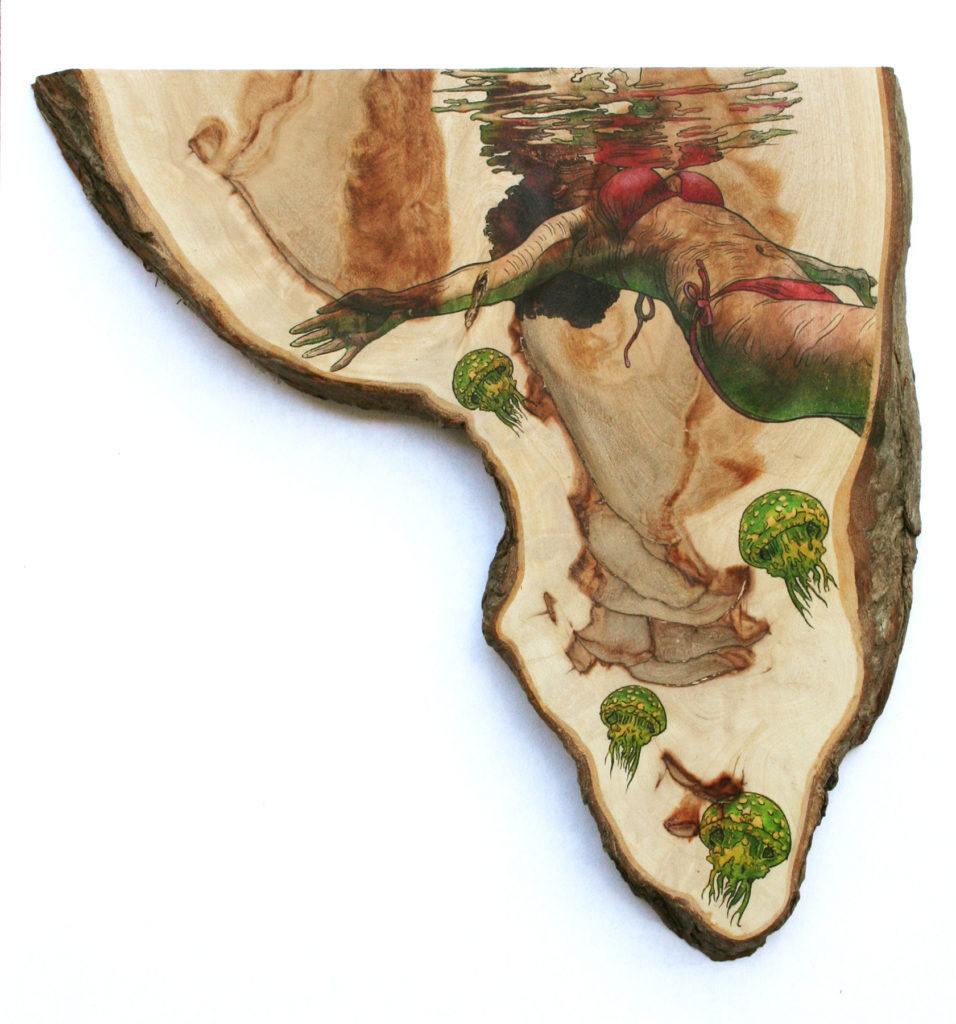 His inner graphic designer is at the helm when conceiving a piece, he enjoys the friction between graphic detail and the elegant self-control of negative space. It begins with a camera in someone’s pool and a brunette woman (dark hair offering itself as an anchor so the rest of the piece doesn’t float away), reflections rippling and undulating as hypnotically as the sea herself. Does anonymity make her elemental; universal; liquefying limbic borders and memories causing them to puddle? The very essence of a girl who makes you use your imagination a little (bikini).

Self-consciously or not, he rifles through planks at Home Despot until finding the burliest ones whose fibrous swells will enrich the reflections and blend with her skin tones.

Their potential-corpseiness is eerie, like a body (of water) (or a lake) and then he floats them on the wooden surface with restraint sufficient to permit his images’ seepage into open water that speaks of austerity and abstinence, somehow sanitizing the latent sexuality of the scene without rendering it neuter.

The reflections of these sunshine-lit, cadaverous women cast a shadow on the same turf that his endangered animal series occupies. His creatures are painted with meticulous attention to detail and are laid on the same grainy wood; they’re an expression of Carson’s evolving thoughts on predation. Most of his animals were at the top of the food chain before automotive exoskeletons and high-handed shooting-sticks flipped the script. Once-fierce animals are reduced to endangered prey in this time of endless consumption of earth and water and meat and powdered horns.

He’s not against hunting and eats some meats (middle path), but thinks folks would consume/waste less if they had to do the messy business themselves.

Explicitly crafted in the overlapping parts of his mind that stewed up the bathing beauties with their restrained sexuality.

You can see more at: BryanCarson.Crevado.com

We all descended upon Miami on Friday in our neutral-colored clothing and dark lipstick, our VISA cards and VIP passes, renting cars and drinking $25-a-glass wine, excited to inundate ourselves with END_OF_DOCUMENT_TOKEN_TO_BE_REPLACED