My brother said, “It looks depressing.” That was his first impression of Detroit. The architecture was older and more industrial than anything we were used to. We arrived in February of 1967, a few months before the riots. Many houses and other buildings burned to the ground. I was partially raised in turmoil, but I was shielded from anything real. I was informed mostly by hearsay, news clips, and the sound of distant gunfire. July of 1967 was one of the bloodiest riots in a non-war region in American history. Forty-three people, mostly African-American, died during the few days of rioting of what has also become known as the 12th Street Riots, or sometimes the Algiers Motel incident. Over a thousand were injured. Hundreds were incarcerated. Unknown amounts left homeless, and/or disenfranchised. The genesis comes way before the vice squad raided a blind pig. A blind pig is a club that sells liquor illegally. The raid ignited the frustrations of unhealed wounds of the 1943 riot. 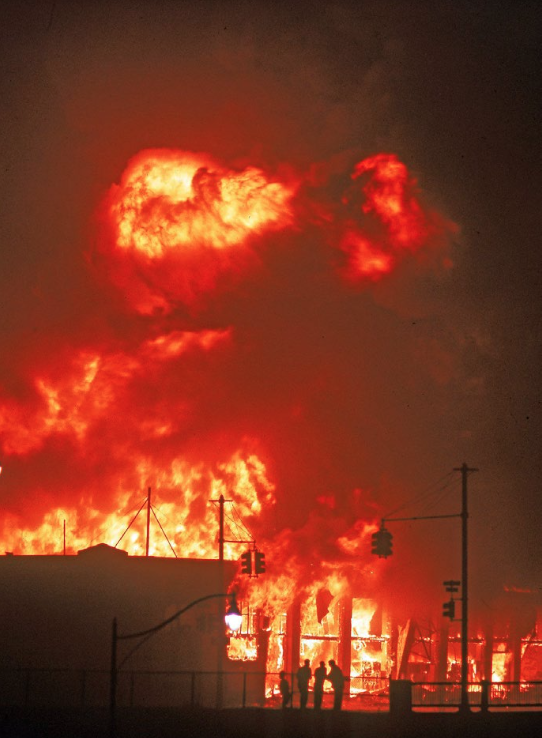 My memories of walking home from the only all-white public school in Detroit are of hearing gunshots far away, or at least that’s what I was told they were. I was detached from the bullets. I heard the stories of people seeing others die. Most (white) adults would always change the subject or complain about the “ingrate blacks.” I was told to fear the black man, by adults. He was the other. He was an exotic who was the product of the scatological mythologies of my nine-year-old mind. He was the Godzilla that ravages Tokyo, and now Detroit, but I didn’t know any black people. My father told me that what these people were saying about the black man was ignorant and dangerous. He said the blacks are people like you and me. They have mothers, fathers, brothers, sisters and people close to them. He said most people base their opinions about everything on fear.  “This country is happy to send the black man to Vietnam to get killed, and they are fighting for a country that they are not free in.”

I did have heroes who were African American. Willie Horton, the burly Detroit Tiger star, a hometown slugger who grew up near the blind pig, stood on top of a car attempting to speak to the masses during the riot. There was so much tension. His voice went unheard. It was 1967, the year the Tigers fought for the American League pennant with three other teams all the way to the last few days of the season. The Boston Red Sox won. Detroit didn’t get a black player until 1958. It was eleven years after Jackie Robinson broke the color line. The only team that took longer was the Boston Red Sox. Earl Wilson won 22 games for the Tigers that year. He was tied for the league lead with Boston’s Jim Lonborg. Wilson was the first black pitcher for the Red Sox a few years back.

Baseball was still a bit foreign to me. I was in the fourth grade; it was my first year in Little League. I played like a fresh immigrant who had never seen a baseball. I listened to every piece of advice given to me. Everyone seemed like an authority to me. My mind was nearly uncritical.

It was probably easier to compare my batting stance to an inanimate object rather than a real baseball player. I have this image of me looking as if I’m waiting for a signal from another place. Maybe my expression was comparable to Anne Wiazemsky’s in Jean-Luc Godard’s film La Chinoise. It’s the film where Godard put an earphone in Anne’s ear. He gave Anne her lines as the scene was being shot, to give her a look of confusion. I’ve never seen La Chinoise, but I’ve read about it. It was made in 1967 too. I was unaware of that at the time.

My teammate, Larry Grayson, was only slightly more capable than I was. Our incompetence became a bond. Larry’s personality was barely animate. He was lackluster in every way. One day he asked me to come over to his house to play catch. I didn’t have any friends, so I went. Going over to Larry’s meant that I would miss the travel show that my brother and I would race home to watch. It was a show that many kids seemed to think was boring. It was geared for adults. Its tone was sober, with more of an educational leaning than a real entertainment feel.

My other source of entertainment was to figure out batting averages. I would make an imaginary player’s career on paper and practice doing averages. We hadn’t learned to do percentages in school yet, but my father taught me when I was in the third grade after I begged him. He didn’t want me to jump ahead of the other kids. I didn’t have any allegiance to the others. 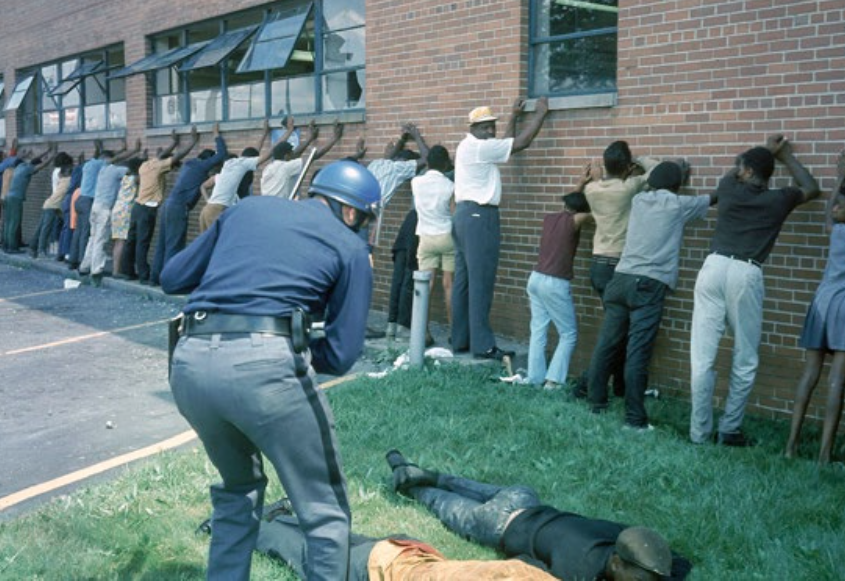 When I showed up at Larry’s, his mother gave me cookies and Kool-Aid. She was very nice to me. I remember her being a bit June Cleaver-like. Then I was introduced to his sister Amy and their cousin Michelle. The Graysons and their cousin (I’m not sure if she was a Grayson) went to the Catholic school. Detroit was heavily Catholic then. I used to go to Catechism after school on Mondays at the public school. Almost everyone in my class was there. The school cafeteria served fish on Fridays.

Amy was a year older than me. Michelle and Larry were my age. Unlike Larry, who in his defense was probably in his awkward stage, Amy and Michelle were vibrant. They were also beautiful. At least this is how I remember them. I made small talk and experimented with flirting with them. I never went through the “I don’t like girls” phase. As I was getting to know the family, Larry was becoming impatient and kept telling me to hurry up. I became less interested in playing catch.

I gave in and went outside with him. Not long after we had started playing catch, I made an excuse to go inside and use the bathroom. On the way to the bathroom, the girls waved at me from the dining room table. They both smiled. After I came out of the bathroom, I wanted to say something clever, but couldn’t. I mumbled something about playing catch. They giggled.

I wanted to make another excuse to use the bathroom after playing catch for a few minutes, but I was aware that it would look suspicious. When I was leaving, Larry’s father was pulling into the driveway. He waved to me. He was large and had a nonplussed expression. The next few days, I made sure that I could come over and play catch. I always made an excuse to use the bathroom. The girls were usually in the dining room. I was getting more comfortable with them. I would stop and talk for a few minutes. The girls would come outside occasionally and talk to us. Larry was visibly annoyed by them. He would tell them to go in the house and help mom. They didn’t take him any more seriously than I did. Larry eventually told his mother that they were annoying us. I was starting to hate him. His mother asked the girls come inside. They obeyed.

The next day, when I went inside for my first fake pee break, the girls started to knock on the door and playfully asked me to hurry up. When I came out, Amy grabbed my arm and asked me to come with them. I, of course, went. We went upstairs to the guest room. Mrs. Grayson wasn’t home. They closed the door and first Amy kissed me on the lips and then Michelle did. I then started to take turns kissing them. Then they pushed me into the bed and started to tickle me. I was laughing. Amy shushed me in a fun way, but she wanted me to be quiet. After a few minutes, we went back downstairs. For the next few days, we did the same thing. We never went any further than kissing on the lips and tickling. I had no idea that there was a further place to go.

We became a little more daring with the duration each day. Larry would be yelling for me outside. One day, we could hear Larry yelling in the house. We heard his footsteps coming up the stairs. Their mother hadn’t been around much lately. I think she was working part-time. It sounded like Larry was going back downstairs. We continued to kiss. I almost didn’t care about Larry catching us. Then, the door opened. It was Larry’s father. He looked much larger than he did behind the wheel of a car. He was hairy and wearing what is colloquially referred to as a wife beater. He looked at me. I had my arm around each girl, as if I thought I was at the Hefner mansion.

Mr. Grayson looked like steam may come out of his head. “You little son of a bitch, who the hell do you think you are?” I ran out of the room and down the stairs. I ran past Larry as if I didn’t see him standing by the front door. I never saw the girls again. Larry never really talked to me at our remaining games. We only had a couple more games left. I ended up getting two hits in the last game. 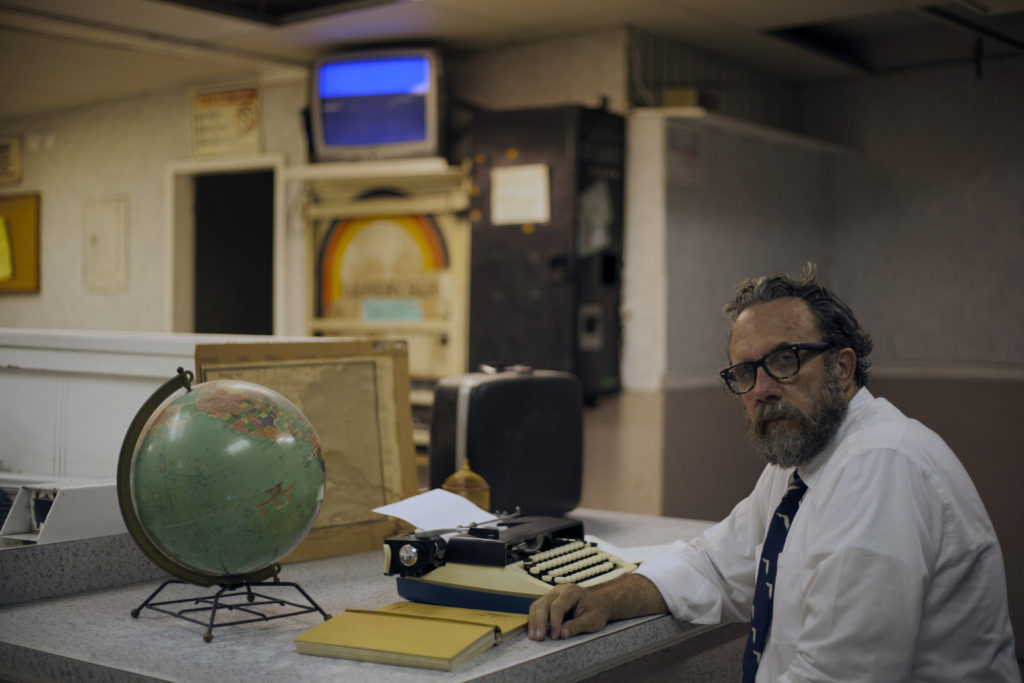 Kayte Terry traces the boundaries of her body with needle-pricked fingers, leaving behind a delicate whisper of blood, the imprint of a toe and a heel in soft, worn, material, the collected ring of END_OF_DOCUMENT_TOKEN_TO_BE_REPLACED