About an hour outside of Orlando, past derelict mom-and-pop convenience stores, warehouses, and modest homes wrung out by the hands of time, sits the largest single-site collection of Frank Lloyd Wright architecture in the world. Florida Southern College’s campus in Lakeland is host to the conception Wright called the “Child of the Sun.” He designed 18 structures total, 12 of which were built under his guidance from 1938 to 1958. Wright was 70 years old when approached to design the buildings; he undauntedly accepted the proposal. His vision for the campus was one of edifices rising “out of the ground and into the light, a child of the sun.” 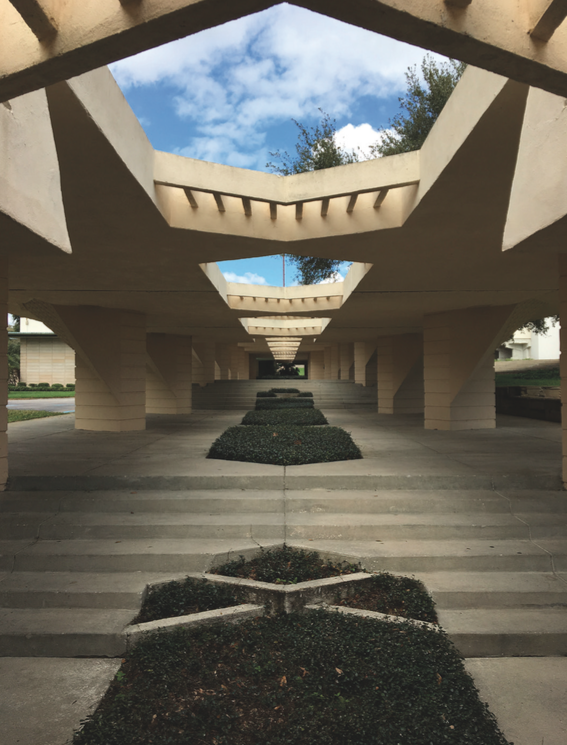 On a sunny day, apropos of the collection’s (and the state’s) epithet, I trekked to Lakeland to take in the architecture for the first time. I’m abashed to admit I had never seen the structures in my nearly 29 years as a Floridian, and I should have been eager to rectify this shortcoming as a cultural consumer and an enthusiast of Wright’s designs, but even the sunshine didn’t seem to shake the somber mood I was in that day. Desiring a completely unperturbed experience—fueled by my misanthropic inclinations at the time—I opted for the self-guided tour when I arrived.

I began my tour at the Usonian Home, which was designed by Wright in 1939, though constructed posthumously, in 2013. “Usonian” was the word Wright utilized in lieu of “American” when referring to his prospective vision for the architectural landscape in which previous conventions were broken. From there, I continued exploring, weaving in and out of rhomboid patches of sun created by Wright’s expansive esplanades, which are a conduit between the buildings. With its tessellating geometric and linear elements, a relevant sense of modernity, oblique and asymmetrical features that skillfully maintain harmony, and monumental scale, the collection is wonderfully representative of Wright’s architectural sensibilities. 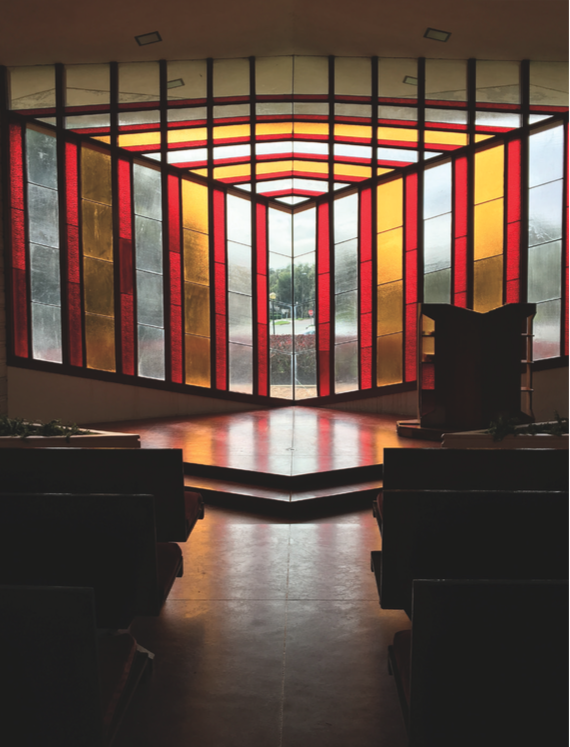 The most impressive and striking, to me, were the chapels. Though far from identifying as a religious person, houses of worship have always allured me. Seeking respite from the heat, I sat alone for a while in the William H. Danforth chapel. Sunlight spilled through the stained glass windows and onto the glossy floor. I started to cry. The sheer pulchritude of the moment, aesthetic and empirical, provided a much-needed cathartic release. I considered how glad I was that I made the journey to the college, albeit initially begrudgingly. After all, there are far worse places to weep than in a Frank Lloyd Wright chapel.

So the underwater ladies are faceless and partially dressed in a way that could be perceived as sexualizing if you wanted to poke some bubbles, but they are roundly pointing at more. The depth of this END_OF_DOCUMENT_TOKEN_TO_BE_REPLACED