Origami Twitter birds wing behind a muse in The Silent Generation, chirping their 140-character messages on the breeze while a baby girl pecks at the typewriter of social change. In his Typewriter City series, Ed Myers addresses our modernity and facility of communication, while picturing women to acknowledge a feminine emergence from behind apron strings and into the workforce. 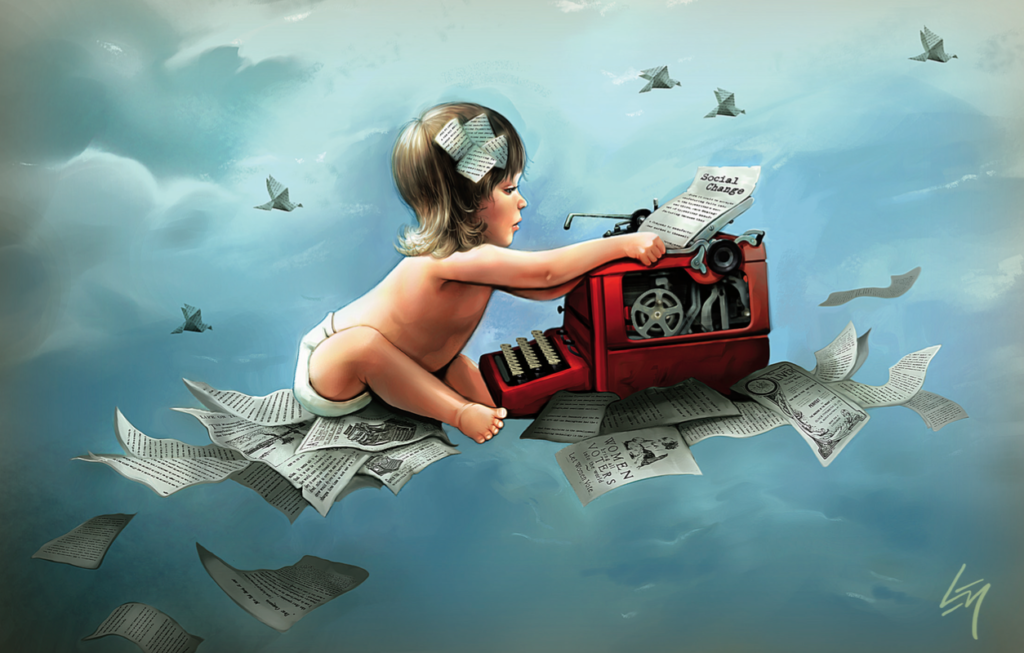 The son of a stay-at-home mom and a mechanic, Myers nods at his roots while branching ever upward to examine the analog technologies of the industrial revolution. He finds increasingly digital means of expressing the ideas and innovations about which he avidly reads, then digests into art.

The illusionist’s most ambitious (and avant-garde) mixed media work fuses 2- and 3-D tableaux with animated elements that rise up like islands on a flat horizon. These elements are then reabsorbed into his images’ edges as if they are pecking through the work, tweeting his story yet further into the future.

Looking out the rearview mirror in his Patent Pending series, Myers reflects on inventors—“Edison was a very good businessman,” he said. “For instance, I have a piece called Tin Lizzie about Henry Ford. There’s an eyepiece which is a headlight…inside the eyepiece is an animation that transitions from a car to a pig, going from rolling to walking.” The work winks at Ford’s assembly line inspiration, which hatched from his observations at a slaughterhouse.

Insightfully, he touches on the perceived and intrinsic values of what is created by hand. “I completely conceptualize everything, first, in the computer,” he begins. As a digital artist, he’s sensible of the fetishized label, “hand-crafted,” and the idea that many don’t acknowledge digital art as fine art. At the time of his fledgeling efforts, digital art “was looked down upon because [people] didn’t understand it or understand how it was created—because they think everything needs to be painted by hand. I do paint by hand, but on a digital screen, and I kept pushing harder to get things that you cannot do in traditional mediums with multiple layers and animation—and that made it unique.”

Myers’ cap is feathering as he correlates the advent of technology with the harbingers of social change. This year, he has stacked up three Best in Show awards with events lined up throughout the season—rain notwithstanding.

You can see more at at lionoptic.com

SPONSORED: Matt Sesow is a global citizen and self-described punk with a message not to be read but screamed aloud from the highest tower. It wasn’t always this way.  When Sesow was eight, he was END_OF_DOCUMENT_TOKEN_TO_BE_REPLACED