Culling elements of her video performances from the language and aesthetics of commodified, New Age healing, Shana Moulton’s trembling and anxious alter-ego, Cynthia, traverses a universe of ailments, cures, prosthetics, and screensaver transcendence, constantly seeking relief. Cynthia continuously attempts to repair broken containers—most notably, her own body—with ritualistic solutions more visible than the ailments themselves. Whether these ailments are real or imagined is inconsequential, as a constant procession of instantaneous cures offers health, relief, and peace of mind. Journeys Out of the Body, at the Museum of Fine Arts in St. Petersburg, presents an immersive display of video and artifacts that flesh out the universe in which Cynthia’s vignettes take place. 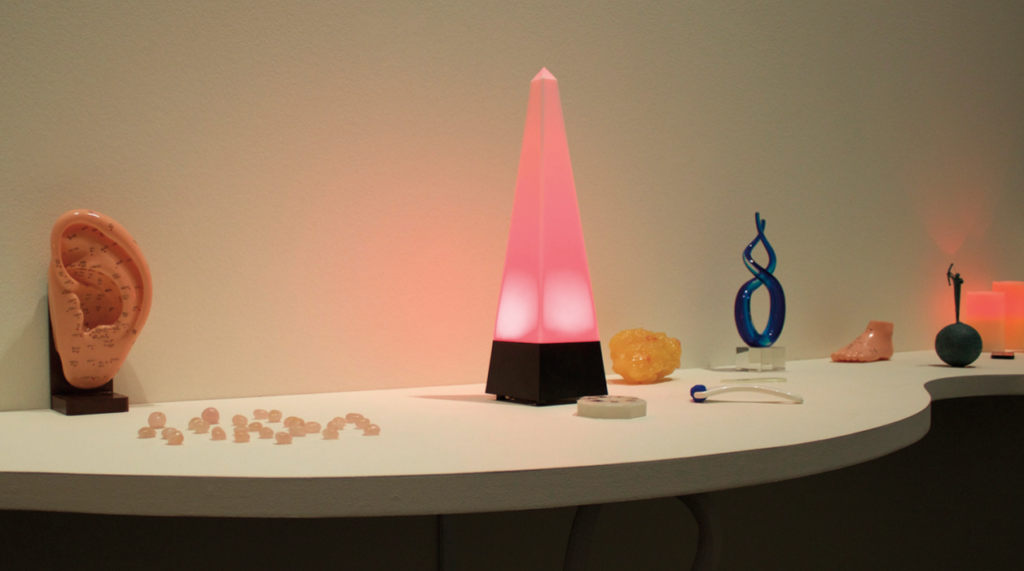 I took a day trip from my home in Orlando to St. Pete to check out the exhibition, and was greeted at the museum by Curator of Contemporary Art, Katherine Pill, who introduced me to Shana Moulton. Moulton was at the museum rehearsing for a live performance of Whispering Pines 10, part of an ongoing series of video performances featuring Cynthia, shown in its entirety at the MFA. As we walked into the entry of the exhibition, Pill offered me a collapsible chair that folded up into a cane, immediately activating my spectator body as I took in the work.

I wandered into a corner of the gallery containing a white, octagonal set of stands—an abstracted, anatomical theater. A single-channel video was displayed on a rectangular monitor imbedded in a wooden table a the center of the stands. In the video, entitled Repetitive Stress Injuries, Cynthia’s body is subjected to a surgery in which her internal organs are replaced with puzzle-like health product logos by a gloved, disembodied hand. Cynthia’s body evades abjection in its cartoonish rejection of the gooey reality of our human anatomies, favoring the neutralized representations of computer generated and graphic imagery, humorously animated. The effect of the display was unnerving—watching the video felt disassociating for me, like watching myself have dental surgery while under the influence of nitrous oxide. 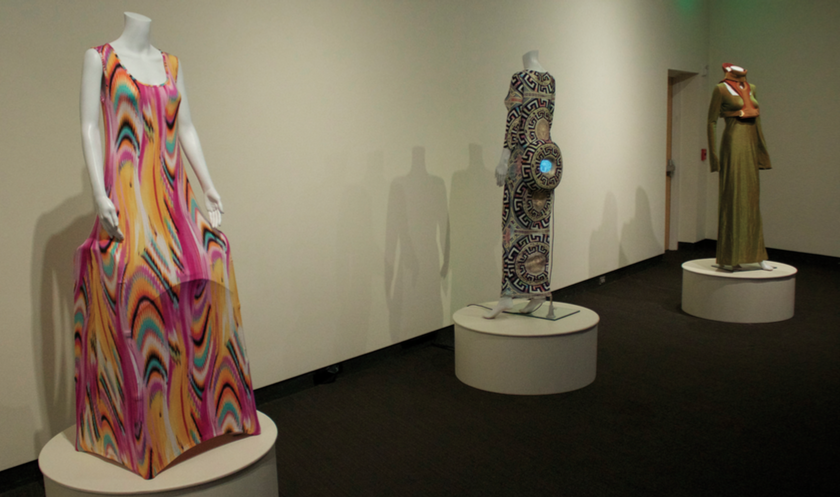 I continued on into an adjacent gallery which contained three dresses embedded with prosthetic devices: Pepto Bismol Immodium Walker Dress, Eyes Without A Face, and Princess Neckbrace Dress. Moulton explained that the dresses were the first part of the project she created in graduate school, and that Cynthia was a tool she devised to activate the dresses.

In Cynthia’s universe, objects have a mystical relationship with the body, as prosthesis, as portal, as autonomous entity. In Galactic Pot Healer Ascension—a two-channel video with sound and sculpture—Cynthia accidentally shatters a teal, ceramic vessel, and then attempts to have it fixed by a mysterious, pink-robed figure (the pot healer.) Unable to repair the shards, the healer has Cynthia lie down for a massage. The healer then proceeds to sculpt a new pot from Cynthia’s clay back, digging handfuls of flesh and molding it into the sides of the new vessel. The pot is fired in a microwave, and comes out as an exact replica of the first shattered ceramic vessel. The shards of a similar pot are displayed in the accompanying sculptural video installation. Footage of the pot healer performing ritualistic gestures is projected onto a trapezoidal, sculptural base. Each of the gestures sends a small, projected object ascending a set of sculptural stairs, in a video game-like motion. 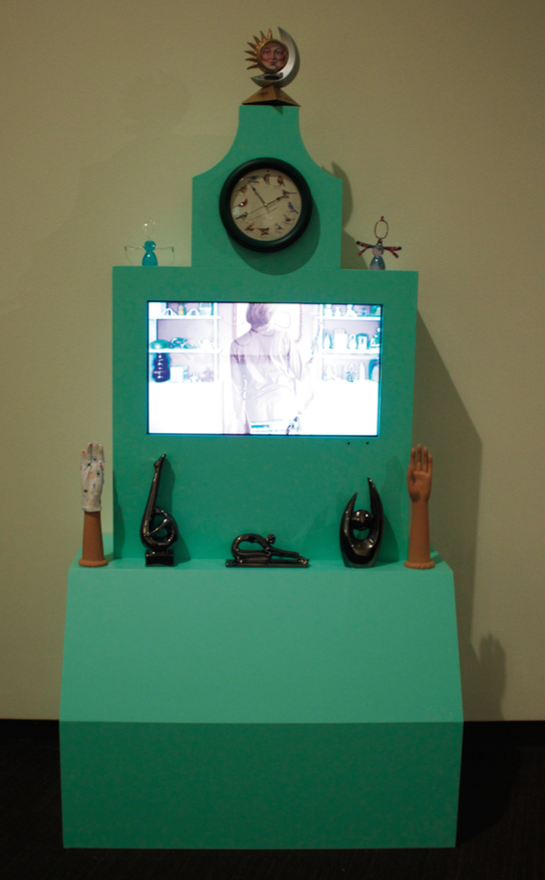 The Undiscovered Drawer, a single-channel video with sound, was displayed in a teal cabinet decorated with small objects—reading glasses with a third, hinged, lens for the third eye; statues of round, smooth, abstracted feminine figures; and mannequin hands. In the video, Cynthia becomes attached to various objects by an invisible force, the objects following her around as she moves. At another point in the video, Cynthia repurposes an ergonomic keyboard into a musical instrument and performs a rendition of Coldplay’s “Clocks”. The installation contained several other references to marking the passage of time, including weekly pill organizers and the presence of multiple time-keeping devices.

Each video, installation, and object in the exhibition blurred the distinctions between the body and its extensions into space—the objects through which we understand, manipulate, and communicate with the world.

You can see more at: ShanaMoulton.info

Jennifer Kaczmarek photographs intimate moments of children and adults struggling with severe health issues in her series Weed: The Story of Charlotte’s Tangled Web. This documentary series focuses on END_OF_DOCUMENT_TOKEN_TO_BE_REPLACED