I’ve been teaching music composition at Full Sail University in Winter Park since the summer of 2010, when they launched their Bachelor of Science in Music Production (MPBS) online degree program. I was the third hire into the degree program, and had some voice in shaping the early curriculum. I saw MPBS’s rapid early expansion become the largest degree program offered, which was then followed by an eventual contraction to something more modest and efficient. Along with this diminution came countless refinements and adjustments to the curriculum—instigated, likely, in equal measure by both the upper administration and the faculty on-the-ground.

It was a fascinating, pedagogical challenge to teach music courses online—one that I feel we rose to meet quite well. It took adjustments in how we think about communicating through video, the written word, and virtual classrooms, but we were innovative, and shared strategies and discoveries with each other. 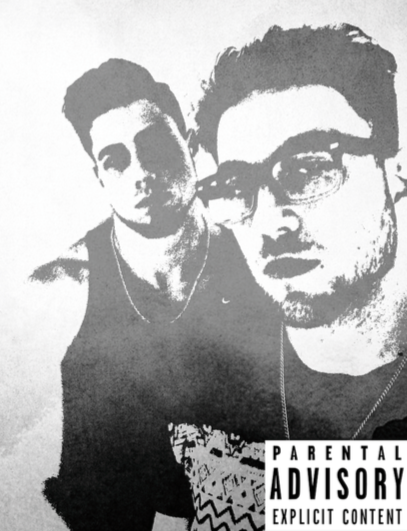 Having taught in traditional, brick-and-mortar educational environments for many years, one casualty of switching to teaching online—along with Full Sail’s structural model, where classes are always four weeks long—was a sense of staying with students long enough to form lasting impressions. It does happen occasionally, either because a student is, undeniably, so talented that I have to take notice, or their personal story is shared in such a way as to forge a connection. Still, even when that happens, there’s always a new month and a new cohort just around the corner, and it becomes painfully easy to forget a name or a face, or both.

That began to change when Full Sail elected to launch a parallel, on-campus program in early 2014. However, because the students progress through a specifically designed track of courses in a specific order, I didn’t start seeing students in the campus course until September 2015.

It’s a lot easier in the face-to-face, concentrated atmosphere (up to six hours in a day) of Full Sail’s campus classes to get to know the stories and personalities of the composers in my classroom each month. Students come from everywhere and from every background: Brazil, Puerto Rico, Colombia, Mexico, Switzerland, and all over the U.S. The numerous ex-military students are almost always colorful characters and models of respect and discipline. Others are boisterous and practically uncontainable, funny and enthusiastic, or introverted and so quiet I have to strain to hear their replies. I’ve learned to never assume what a student is interested in based on their looks or heritage, and talent is the same way.

One huge talent that grabbed my attention recently is Mike Capps, a 27 year old rapper and producer from Little Rock, Arkansas who goes by the professional name Infamous—inspired by an action-adventure video game of the same name, whose protagonist, Cole MacGrath, starts as a bike messenger and soon gains comic book style, electricity-based superpowers in an explosion.

Capps came to Full Sail out of frustration, boredom, and restlessness, with the support and encouragement of his twin brother, Colton. Neither brother stuck with college. They worked numerous jobs: lifeguarding, fast food, jewelry sales, retail, life insurance, waiting tables, and more. With a population of less than 200,000, Little Rock, for the Capps brothers, had a cloying, small town feel, where, according to Infamous, “Everyone’s stuck. No one thinks big.  No passion. They all serve. I was in a Little Rock rut. I used to drink a lot. [I thought] there had to be more than what I was doing. I sold my car and left.”

It’s kind of hard to have this conversation

Staring out the window, watch it catching condensation

I tend to find, I lose my mind, in the compilations of the constellations

Stay true and you’ll make it if you got the patience,

When surrounded by the fakest like in the Matrix, please heaven don’t forsake us

When some of us are just anxious for the pay cuts, please show me a way

I pray, ‘cause the, world we know today can make or break us

It can shape us, and change us, that’s why I been writing my pain

In these pages for ages, releasing anger that rages

Tired of not going places, ‘cause of minimum wages

I’m so tired of waking up and realizing, I’m late on my payments

Then my sweat hits the pavement

Wake up, the only way to believe, there’s an American Dream is to remain asleep

Wake up, we need to wake up from the American Dream

Wake up, we need to wake up from America’s Scheme 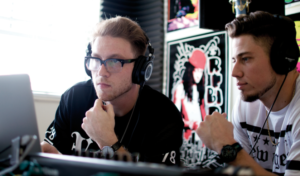 Infamous (left) and Twin (right) in the studio, photo by Mariana Mora

But Infamous didn’t leave Little Rock alone. Colton came too. They have that special bond unique to twins—so special that it’s a blessing and a curse. Their bond interferes with their outside relationships, and, as often happens, the first born twin takes on a dominant, almost parental role. Colton Capps sees in his brother the same possibility inherent in Cole’s character in the video game. He feels that, like Cole, Infamous will follow a similar path from the mundane to the miraculous.

He’s right that Infamous has serious chops. Back in high school in Little Rock, he flexed his writing and performance muscles with his friend, Zac Overton. In their spare time, they would take turns throwing out verses memorized by their favorite artists, and challenge each other to guess whose material it was. Then, they took it a step further. They began to try to trip each other up by throwing in original material to see if they could fool the other into guessing a big name artist. Infamous still collaborates occasionally with Overton, who goes by the name OV.

Infamous lists several artists as inspirations: Eminem, Bob Dylan, Dr. Dre, Bone Thugs-N-Harmony, Yela Wolf, Rittz, and Kendrick Lamar, but it’s the influence of Eminem that jumps out at me. What Infamous has assimilated from Eminem is twofold: musically, what Eminem does spectacularly well is a choreographed dance between syllabic accent and metrical accent. Most of the time, hip-hop or rap is in what’s called “common time,” with four main pulses per bar that can each be subdivided, with the first pulse receiving extra emphasis relative to the others. That emphasis is called the “downbeat.” Like a parking meter ticking off time, that emphasized downbeat pulse is a regularly repeating, predictable event. Early hip-hop tied the speech rhythm of the lyrics to that downbeat so that the syllabic accent of keywords always landed on the downbeat. But that approach eventually freed up as artists became more rhythmically sophisticated and realized that the interplay of those elements is more interesting and dynamic than their rigid coordination. Eminem floats syllabic accent so that it skips around to different parts of the bar, doubling, tripling or even quadrupling rhymes or assonances. The downbeat acts like a center of gravity, and the speech rhythms now play with their changeable proximity to that center. Infamous does this too, and also raps with more than one persona, like Eminem. Infamous often delivers his choruses like a lazy stoner who somehow manages to stay in time and in tune, while his verses have an aggressive, spontaneous, and rhythmic vitality.

Infamous has been honing his skills for twelve years and, at the age of 27, he has a catalogue of over 200 songs. Despite his prolific tenaciousness, he suffers from regular bouts of anxiety, mitigated by marijuana use (the stoner persona didn’t come from nowhere), intense writing sessions, and his brother’s vigilant and unwavering support. Colton currently raps with his brother under the name Twin, but they are already looking to refine their work as a duo now, beginning to explore the theme of Jekyll and Hyde as personas for each of them, which certainly sounds like fertile ground for twins. Capps will graduate from Full Sail University in February 2017, and if his brother has the influence and sway that he hopes to have, Infamous will be emulated by some high school kid somewhere someday, looking to make sense of his surroundings and yearning for something more. 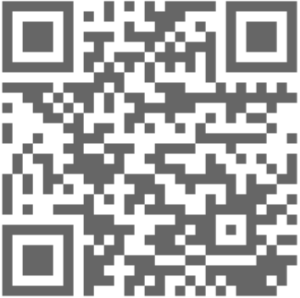 Infamous made a Soundcloud playlist to accompany this article at: https://soundcloud.com/littlerocksinfa501/sets

You can see more at: NotoriousBTC.wix.com/InfamousMusic

When hearing the term “surrealism”, most people think of melting clocks, flying fish, or animals with unnaturally long toothpick legs. The artistic style has a reputation of being weird for the sake END_OF_DOCUMENT_TOKEN_TO_BE_REPLACED