Brandon Geurts was awarded “Best Heavy Metal Visual Artist” in Orlando Weekly’s 2014 Best of Orlando lineup. Two years later, as the artist prepares for his upcoming thesis exhibition for his Master of Fine Arts degree from the University of South Florida, he continues to explore themes of body horror and states of psychological extremity through visceral, two-dimensional works. With a background in illustration, Geurts now works—with expressive virtuosity—primarily in oil and watercolor, frequently depicting oozing, bursting, “gooey and awkward” figural subjects in ambiguous spaces. He says he is influenced by cartoons, horror, and monster movies. “I see fiction as a form of research. Fiction reframes the absurdity and mystery of existence through the use of codified tropes and settings. Animation, in particular, has a rich, unspoken visual language. The selective plasticity and malleability you can find in cartoons has provided several interesting, formal hooks.” 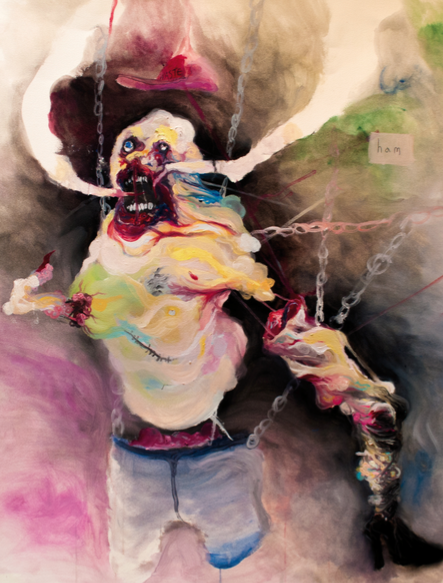 Putting on My Public Face, oil and pencil on paper

This dreamlike malleability is a characteristic of much of Geurts’ recent work. With a deceptively sugary palette of bubblegum pink and blushing peach, melting flesh, teeth, and ambiguous orifices undulate en masse in the Oozing Attitude series of oil paintings on canvas. Fleeting references to human anatomy bloat, swell, and distort into monstrous heaps and disembodied appendages. The figures in the Anxiety Organ series of watercolors are more expressly human, with discernible faces and bodies that are overtaken by monstrous, parasite-like forms. “The uncomfortable should feel comfortable.”

This sensibility was honed in the DIY punk community— Geurts helped craft the visual identity of Orlando’s vibrant and thriving scene, having collaborated with a number of bands and record labels to create posters, flyers, and album covers. “Being in a DIY (do it yourself) punk community has had a gigantic influence on my ethics as an artist. Being able to operate on my own terms while also fostering an exchange of ideas with similar artists is vastly important to me. Gallery culture is important, but it can be limiting at times.” Embracing this sentiment, he has exhibited in non-profit and artist-run spaces such as Tempus Projects in St. Petersburg and A Place Gallery here in Orlando, as well as in non-traditional spaces, such as Orlando’s BART and The Falcon bar.

Geurts’ work has been featured in a number of exhibitions locally and nationally, including Worlds Collide at A Place Gallery, Heroes, Myths & Make Believe at the Gallery at Avalon Island, and a solo exhibition, Flesh World, at CANVS. He is currently working on a new body of work for his thesis exhibition in 2017.

You can see more at: BrandonGeurts.com

I left Orlando for school in Philadelphia a week after the tragedy at Pulse. My friends were still grieving, lines of people waiting to donate blood still stretched across many blocks in 100-degree END_OF_DOCUMENT_TOKEN_TO_BE_REPLACED