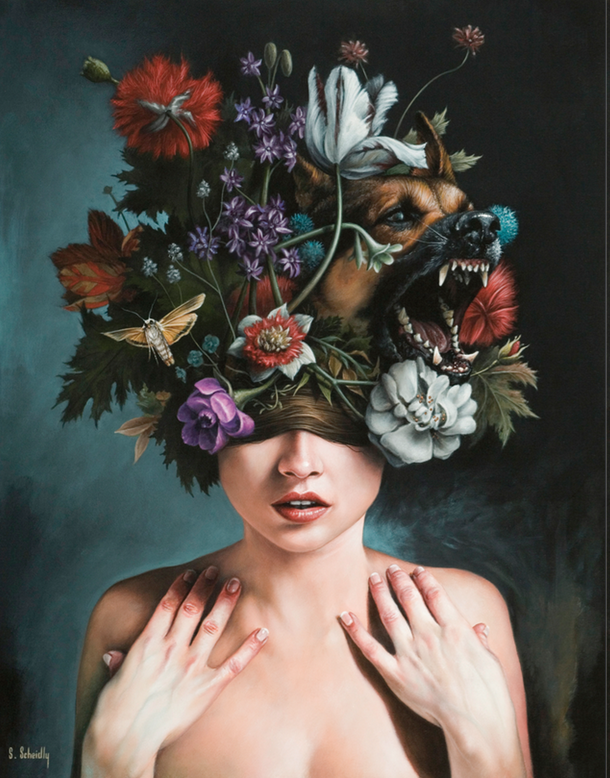 Introduction by Vanessa Andrade
All of the “political” artists are hard at work making fools of the candidates (whom they disapprove of) running in this upcoming election. There are memes, paintings, and satirical videos reflecting the opinions of American society. I kind of love that. It’s fun and also pretty glam. I’m not very interested in painting as a contemporary art form. I’m not interested in the displaying of a skill set. I am interested in the aspects of politically driven art that convey emotional experience. This is very reflective of expressionism. Stylistically, you wouldn’t think of political art as expressionism, but the feelings that are involved with the choices made seem very similar. Expressionism was part of the modernist movement—it forced art to represent emotion through experience and feeling rather than simply convey objects or landscapes from reality. A lot of the masters who came out of the expressionist movement painted abstractly. Perfecting the forms of the subject wasn’t the focus or concern of the artist.

Orlando-based artist Scott Scheidly created a series of paintings called The Pinks. Scheidly is interested in using color theory to distort the image or reputation of these historically evil political figures, like Adolf Hitler, Kim Jong II, and Donald Trump. (Yes, I do consider Trump to be historically evil.) Scheidly expresses his disdain for these figures using humor, by dressing them in gendered colors, like pink and purple, and inserting symbols like Hello Kitty and Care Bears to mock them.  Humor is one of the most important elements of The Pinks. He combines these different elements in an attempt to show how colors change perspective. 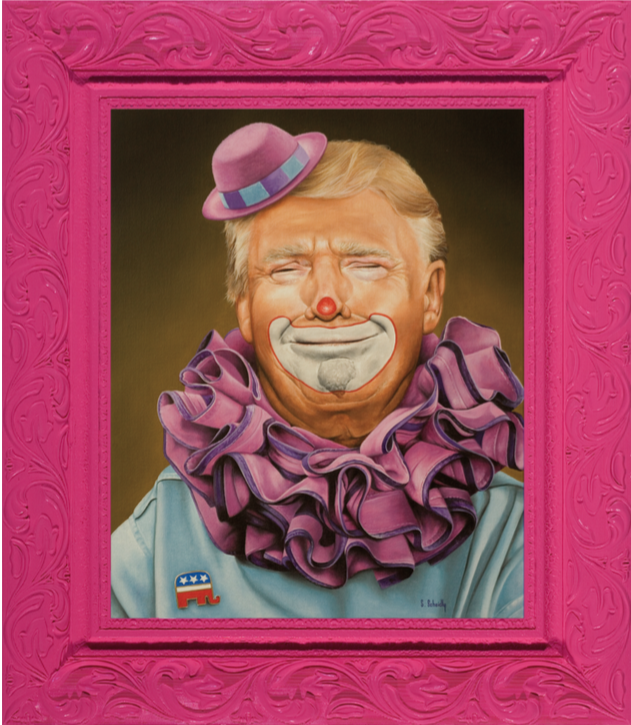 The painting of Trump was created out of Scheidly’s disdain for the Republican candidate. He doesn’t understand how anyone like Trump could have so much support. Scheidly isn’t interested in watching the debates; he says there’s only a certain amount of pain he could bear. I want to understand the ways Scheidly expresses his disapproval through these paintings. He lost a lot of people from his mailing list when he sent out an email update about his clown painting of Trump being available in print. I asked Scheidly if there was anything he says to Trump’s audience with his art. He said, “Please reconsider.”

He’s currently working on a series of oil paintings for SCOPE during Art Basel Miami Beach this December.

I reenacted what it would be like to walk into a solo show featuring The Pinks. Here’s a short screenplay documenting a friend’s and my critique and response to the work. (You can find Vanessa and Arturo’s screenplay here) 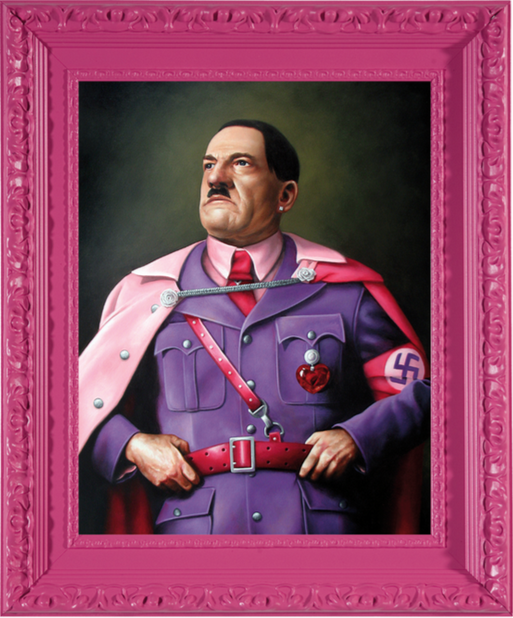 Broaching the Subject. A Conversation with Jonathan Yubi

After Vanessa’s screenplay, I felt the need to reach out to Scheidly, and figure out the reasoning behind her assessment of his work. It occurred to me, this interpretation might be more common than I could’ve ever assumed. With introductions and formalities out of the way, Scott and I agreed to meet at Downtown Credo in College Park and dig deeper into the controversy his work was kicking up. It would seem apparent the controversy of The Pinks stems from his antagonizing portrayal of political figures such as Vladimir Putin, Donald Trump, and the Pope. Instead, through a mock screenplay performed by Vanessa Andrade and Arturo Ugalde, the subjects of homophobia and implicit anti-feminist sentiments were brought up. As a reaction to Andrade’s piece, Scheidly confesses, “I felt like I came off as a homophobe, and douchebag in general. I thought it was interesting, though. I see what she was doing with it and I knew where she was going with it, but it played out with me being a douchebag. There was no resolution, like, ‘Wow, I get what he’s doing here.’” 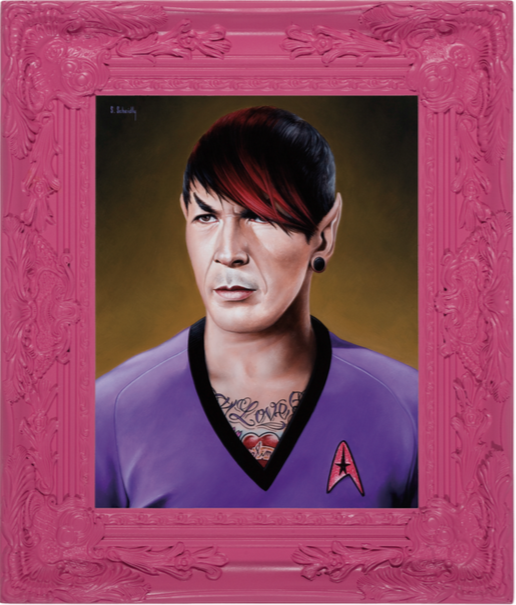 In his screenplay, Ugalde writes “[Pink is] associated with homosexuality and, yes, with being a woman, and also with infantilization and feminization. These paintings are coming across as offensive.” An interpretation rooted in our current social climate, yet one that doesn’t completely take into account the historical significance of pop-surrealism and lowbrow art. With its origins in the 70s underground punk culture, lowbrow art served as a satirical and often rebellious art form that mirrored the attitude of the alienated artist of the time. Contrary to expressionism and other styles of highbrow art, lowbrow work lacks “scholarly writing.” During an interview with Takashi Murakami, Evan Pricco says “What I always like is that Robert (Robert Williams, Founder of Juxtapoz) writes with this mixture of elegance and ‘fuck you’ authority, and it seemed to resonate beyond the page into a whole culture.” Does Scheidly’s work fit neatly into the style of art pioneered by underground culture? He takes pop-cultural icons and symbols and integrates them into his portraits of historic and political figures in a reflection of his own humorous and trivial outlook on life. Between sips of cold brew, Scheidly casually reinforced his blithe disregard for serious dialogue on the deeper meaning of The Pinks. His explanation boiled down to color theory, explaining, “Mainly it’s about color theory and how color can change perceptions. Which it does. When people look at these, they think it’s gay Hitler. But it’s not gay Hitler, that’s your perception that he’s gay because he’s wearing pink.” Does that speak louder of Scheidly, or of the audience member introduced to his work? 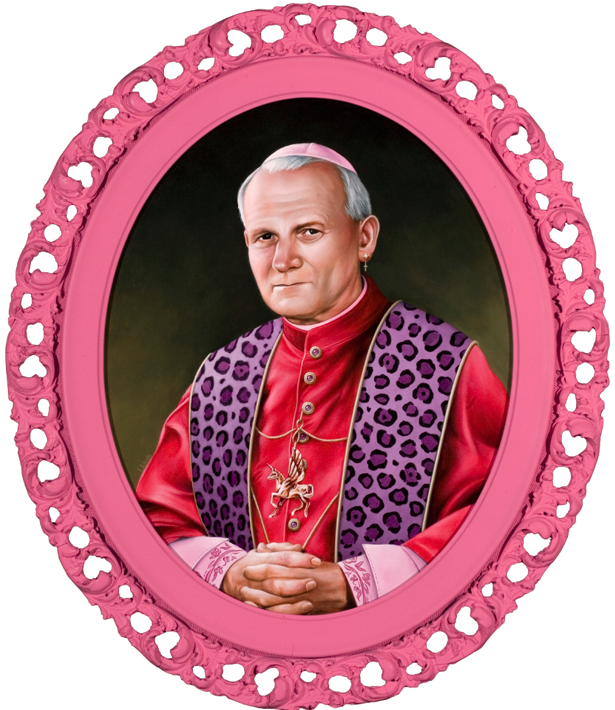 The Pope, acrylic on Masonite, framed

During his time with The Pinks, Scheidly mentions the numbers of threats and other outlandish reactions to his paintings. He claimed the subject of homophobia and anti-feminism has never surfaced as a response to his work. During an exhibition in San Francisco, his work was berated by an elderly woman, visibly upset by his representation of the Pope. The painting of Vladimir Putin also registered insults and threats, but it was the painting of the Star Trek character, Spock, that mucked up the most violent protest. After receiving several suggestions of suicide, Scheidly jested the Trekkies would have the power to hack his computer. Why such strong reactions to a portrait series? It’s an obvious, lighthearted mockery of the characters, but does it equate to an ignorant representation of homophobia?

“If you don’t actively learn about the turf or genre you inhabit, you can’t ever properly call yourself a resident of that landscape. What you are is a tourist.”

One thing is abundantly clear: the amount of controversy and dialogue Scheidly’s work has drummed up is refreshing. Lacking high-quality criticism, the contemporary art scene in Central Florida is at risk of death in its infancy. How often do we question or analyze beyond a surface level of niceties in our own environment? Social issues are on the forefront of this election season. With Trump, reproductive rights, LGBTQ+ rights, immigrants’ rights, and others, face the possibility of being rolled back decades. The progress we’ve made as a civilization could ultimately be whittled away by an orange-faced bully. And while these are serious topics, I continue to wonder if projecting anger and disgust onto The Pinks is misdirected. Perhaps not. Scheidly is a straight, middle aged white man—a benefit in most circumstances. It certainly doesn’t make for a strong case for friendly interpretation of his portraits. Best known for The Pinks, Scheidly claims he continues this body of work for the acclaim it allows him. Our conversation steadily drifts into his greater passions, such as his tiki art, and his fascination with surrealism. 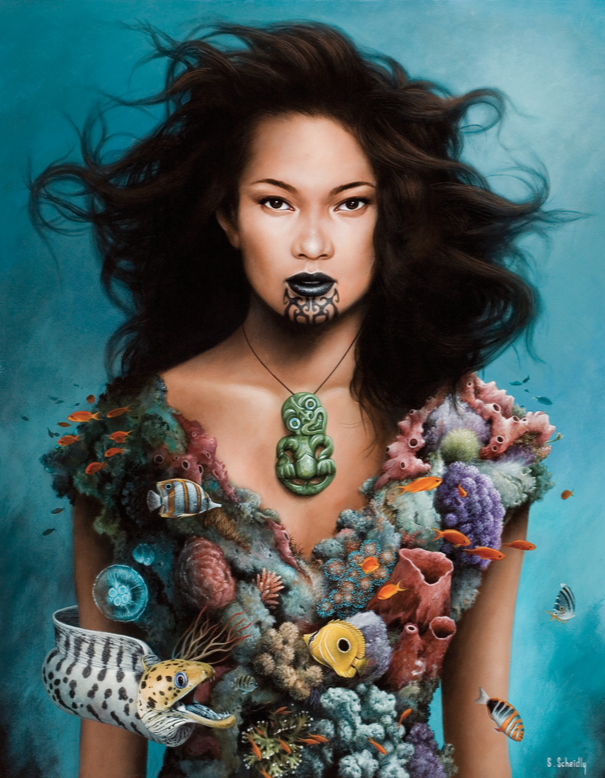 Who Cares About Tiki Art?

Tiki culture saw a rise in influence after WWII as American sailors returned home from combat in the Pacific. Post-WWII America saw the rise of the middle class and, with it, Polynesian tiki culture. On a casual analysis of mid-century America, it seems significant that tiki culture symbolized freedom from the suburban sprawl and a sense of escapism for American vets as they acclimated to a postwar climate.

Scheidly has been creating tiki mugs for quite some time. His side gig might be interpreted as the typically woeful financial situation of many artists. Yet, such isn’t the case in his life. Despite his addiction to hand paste, paint, and modeling clay at a young age, he managed to kick his habit and lead the life of a practicing artists without relying on a supplemental income. 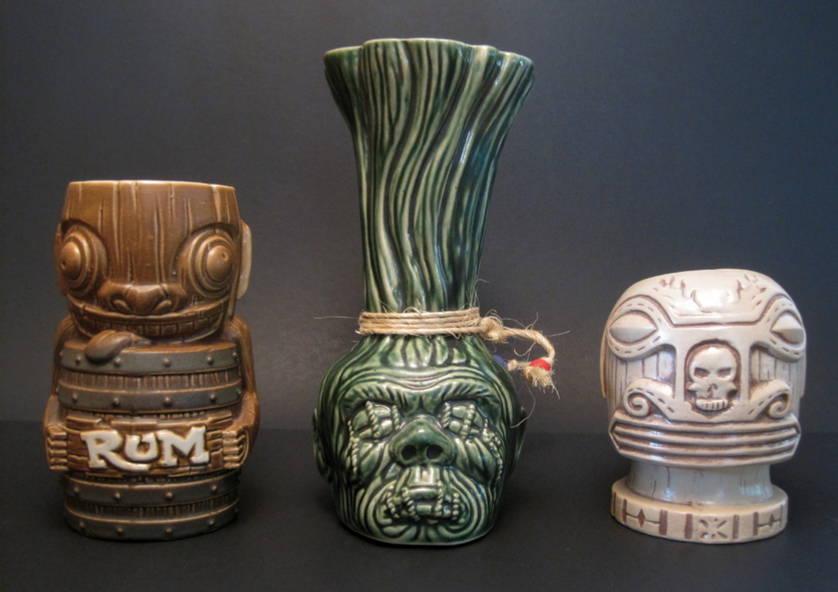 So, why does he create tiki mugs? Sensing a pattern of mostly unanswerable questions, I make the most of our interview. The takeaway? He was a normal child, in the sense that he was actually weird as fuck. Years later, that quirkiness remains; the proof is in The Pinks. 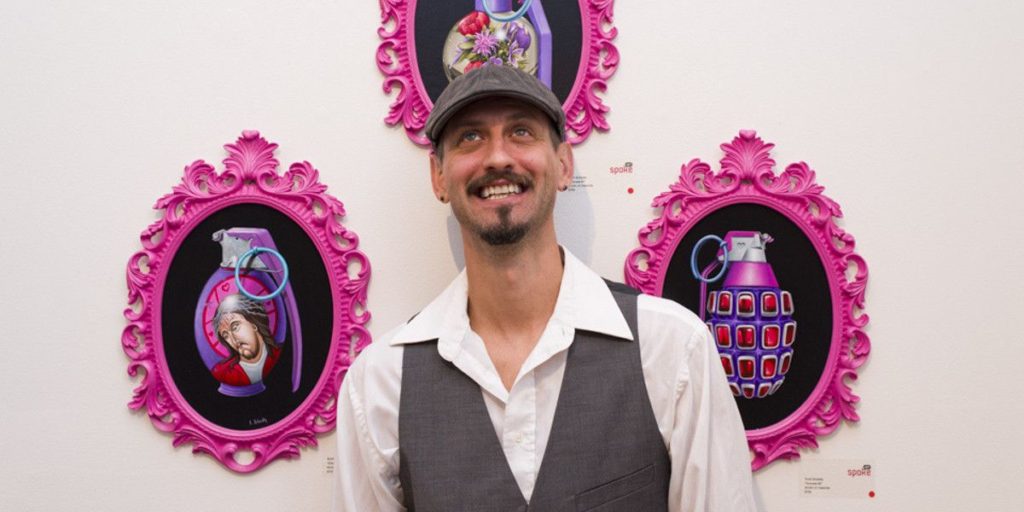 You can see more at flounderart.com

Brandy Renee is a Florida native. Her artwork is inspired by nature and the spiritual side of things. Her pieces reflect the emotional state of being through paintings of forests, trees, and water as END_OF_DOCUMENT_TOKEN_TO_BE_REPLACED