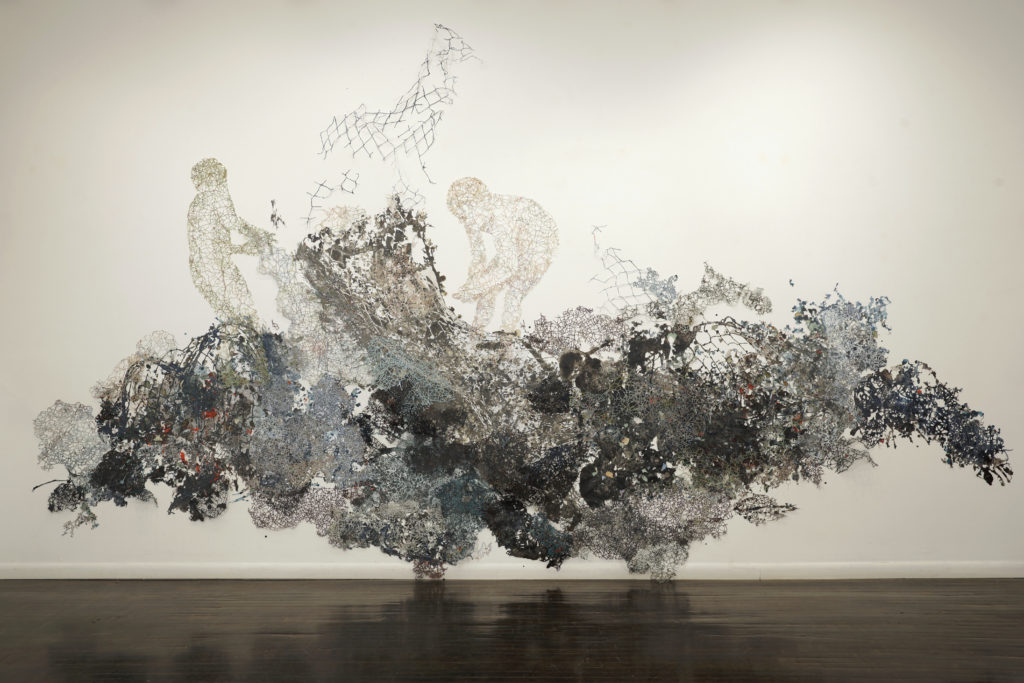 Two stooping figures emerge from a chaotic mass of delicately cut paper resembling chain-link fence, nets, and dissected roadmaps. The figures appear to reap or sow something from the heaps below them. They remain anonymous, features replaced by the vein-like intersecting lines on maps. They are frozen in their gestures, held in place on a gallery wall with round, red map tacks. Fidencio Martinez’s installation, El Hielo/I.C.E, (referring to United States Immigration and Customs Enforcement) seems conscious of the arbitrary boundaries humans have created to represent our political, cultural, and geographic differences. Martinez, born in Oaxaca, Mexico and raised in North Carolina, is informed by the traditional crafts of Oaxaca as well as the political and socioeconomic conditions of immigration between the U.S. and Mexico.

As the 2016 presidential election draws near and Republican candidate Donald Trump continues to espouse nationalist rhetoric, including the proposed construction of a wall between the U.S. and Mexico, Martinez’s work seems increasingly relevant. His chosen materials—maps, manipulated and cut to resemble fences, as well as the human figure— implicate the constructed nature of geopolitical borders, as well as their very real implications on individual lives. 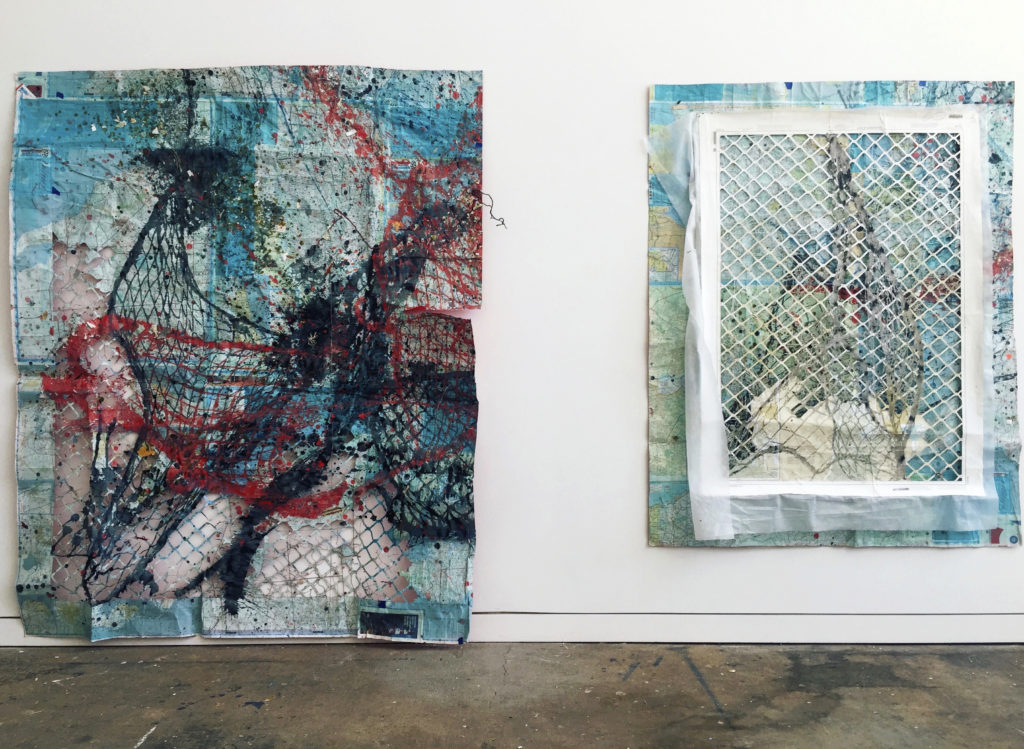 Historically, maps were drawn by cartographers who attempted to convey spatial reality in a two-dimensional form, making symbols corresponding to the expansiveness of our planet’s surface, porous delineations between cultures as lines on paper. Maps were a model of reality, however crude. As technology advanced, our ability to represent coastlines and the physical realities of the surface of the planet improved. However, out of this representation of our physical space, we have created a simulacrum which precedes reality. Accepting the map as reality itself (forgetting that it is merely a model of our constantly evolving and indescribable reality) we have drawn lines on two-dimensional surfaces and then attempted to enforce these lines in real space with armed guards and constructed barriers. By cutting the silhouettes of human figures out of mapped representations of reality, Martinez calls attention to the actual lives at stake in our defense of imagined borders.

The maps cut to resemble chain-link fences and nets implicate the structures built to enforce these borders. Martinez speaks on his interest in the metaphorical materiality: “structurally [nets] are similar to fences…the connotations of catching, fishing, swarms of school fish. The vocabulary used in the media to describe immigrants is very intentional. A surge, a wave, an avalanche… and so on. All these descriptive words void the conversation of any humanity and further the people’s fear of the other.” 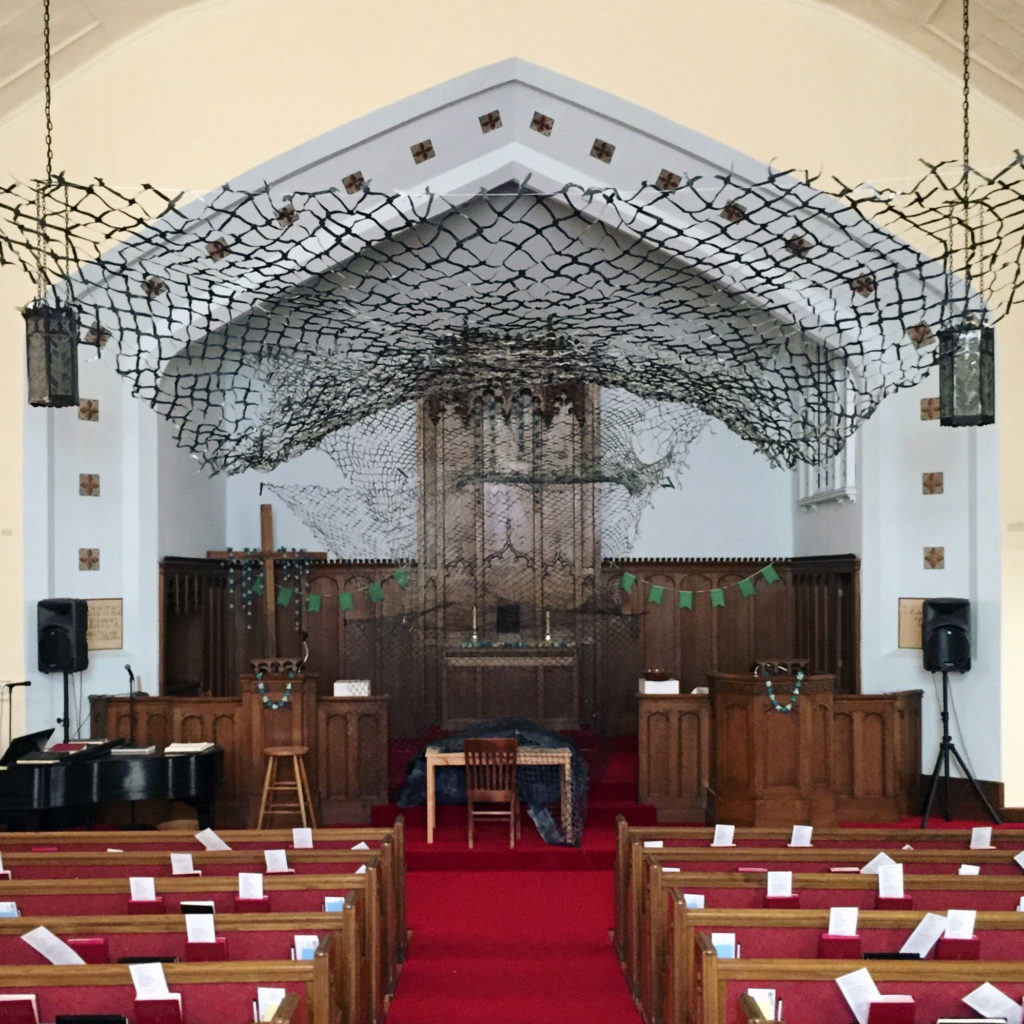 Perhaps by dissecting the mediums and metaphors through which we perceive our physical relationship with reality, like Martinez, we can begin to better understand how our identities are informed by these representations.

You can see more at: FidencioMartinez.com

Kalup Linzy stays busy. Between a professorship appointment at SVA, multiple residencies on the horizon, creating new artwork, exercising his social prowess within the art world, and opening END_OF_DOCUMENT_TOKEN_TO_BE_REPLACED