Jessica Earley paints with a broad palette. The thirty-something emerged into Orlando’s art scene in 2008 through puppetry and parade with the arts and music production group, Bread and Circuses. As if for a lark, Earley threw a solo parade commemorating her 10,000 days living with 10,000 steps. She walked the five-mile course mostly alone–though the public was invited–while airing relevant songs and recordings from her journal. Effusing a tongue-in-cheek sense of humor, this cortège in reverse served to celebrate her life while also underscoring an essential sprightliness. 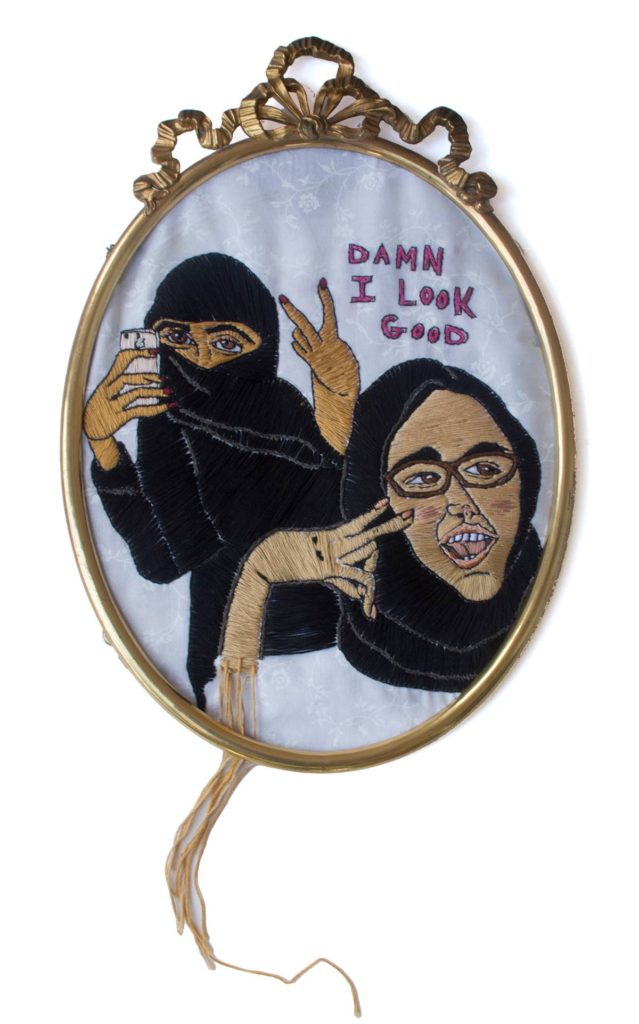 More than Meets the Eye, embroidery on fabric, framed. Photo by Mariana Mora

A wellspring of Earley’s drawings and paintings has continuously bubbled up over the years, processing women’s issues. These evolving collections are seasoned with subtitles, and are unafraid of slippery wordplay, through which she plays up clever tangents grazing innuendo, raw emotion, and seductive insight to caption her deeply feminine imagery. She explains, “I was consumed by these feelings about wanting to become a mother, so I’m assuming it was hormonal, and I wanted to express it through my art because there’s a catharsis to that.”

Generously peppered among her steady material output, Earley has created a number of video art pieces using digital media and Super 8 film. “I used to try to capture little moments–everyday things that come across as special or significant to me,” she said of her enchantingly ambient and moody videos, which are viewable in her collection under the username “Bunnihop” on YouTube.

She considers her most ambitious piece yet to be “Hyper-bolic”, a 45-minute long spot of performance art she put on at The Venue a couple years ago. “It was in response to a breakup that completely destroyed me. When I was going through it all, everybody said I’d make such great art from it, and it sucked to hear at the time, but they were right, and I feel really proud of it… It was hard for me because of social anxiety, and I got teary [in the midst] because it was so difficult to do and so personal.”

This radiant star in our local art scene projects herself in the not so distant future making more video which fuses puppetry and performance.

You can see more at: JessicaJaneEarley.weebly.com

At the end of 2015, upon check-in at one of my favorite NYC haunts, The Ludlow Hotel, I spied a pair of Keith Haring works flanking the lobby fireplace. There were several people drinking cocktails, END_OF_DOCUMENT_TOKEN_TO_BE_REPLACED