Pedro called himself an “old man” no fewer than three times while we spoke last week, and I kept telling him it wasn’t so. If it were a self portrait, he might include wrinkles the rest of us can’t see, but more likely he’s settling into the gravitas of having an impressive 50-year career, and folks treating him accordingly.

He does paint himself, wearing ministerial garb, embedded into the texture of his luminous and richly layered paintings that are dominated by deeply saturated warm hues. “I try to incorporate in my paintings what I am. I used to be a pastor for many years, and in the backgrounds, sometimes you can see me as a pastor a minister.” 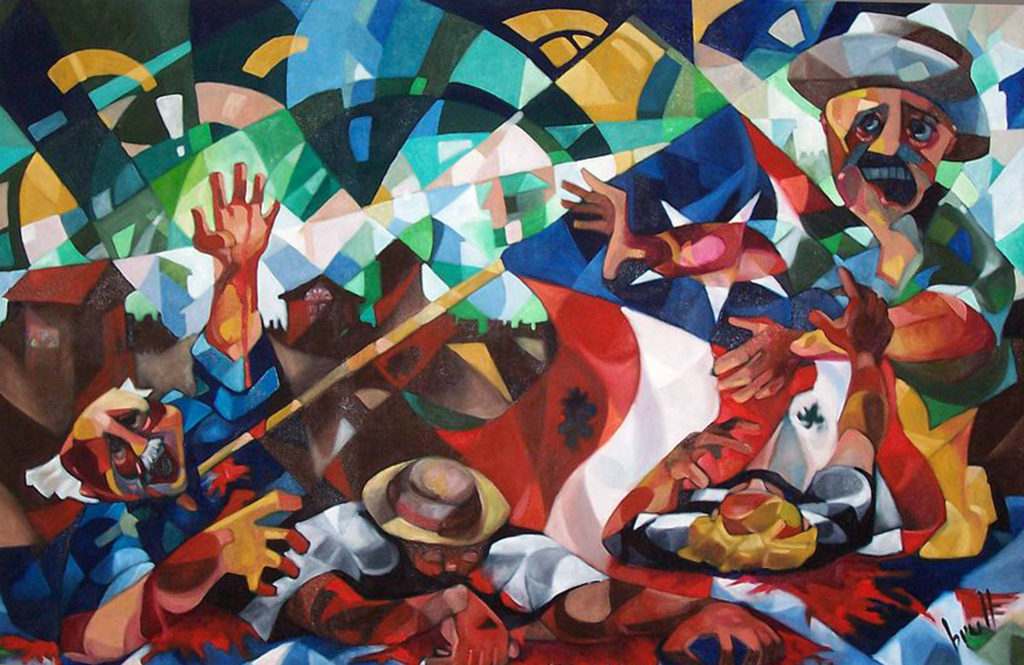 The Ponce Massacre, oil on canva

Born in Vega Baja, Puerto Rico, Brull began his artistic journey as an apprentice to a well-known muralist and a set designer for the local television station. Rafael Rios, his mentor, was proud to sponsor the youth. “I started as a scenery painter… That’s when everything changed for me… While I was in school, I tried to get all the math and science courses because I wanted to be an architect.” But after discovering the satisfactions of painting, he quickly changed focus.

Brull came to the Orlando area over 20 years ago, before we had much of a Puerto Rican accent to our regional dialect. He tells of going into a local gallery with his paintings to ask for space, when the manager kindly told him that his work was wonderful, but would sell better in Miami. I was pissy when he said it but, amiably, he explained that she knew her market, “And she was right!” he laughed.

A thematic current flowing through his veins is immigration. “People emigrate from one country to another, and we [Puerto Ricans] are U.S. citizens, but when we move, we feel that we are immigrants because we keep our culture… that’s the feeling I try to express.”

Brull recently earned his second lifetime achievement award with a body of work that represents an amalgam of his unique perspective incorporating influences from his motherland, Mexico, New York, and Orlando.

Pedro will be showing in a group exhibition, Celebrating Hispanic Artists & Culture, at Osceola Arts begining September 13 through October 27, 2016.

You can see more at: FineArtAmerica.com/profiles/Pedro-Brull.htm

As a museum curator, I feel a responsibility to create exhibitions that reflect current events and echo themes of social justice. I aim to create projects that elicit conversation, debate, and END_OF_DOCUMENT_TOKEN_TO_BE_REPLACED