I was first exposed to Doris Salcedo’s diverse oeuvre while working toward my art history minor in college. It was during a Latin American art history course, taught by the insightful and passionate Cyriaco Lopes, where I became acquainted and enamored with the talent of many creatives from the region. My interest was piqued by themes of sociopolitical activism and aspects of contemplative mourning, motifs running through much of the art produced by Latin American artists in the 20th and 21st centuries. Salcedo’s body of work is no exception, and is the quintessence of these artistic devices. Her artwork plays on nuance and ambiguity, evoking an eerie, gentle stillness that goads one to delve deeper to comprehend the various facets of her message. 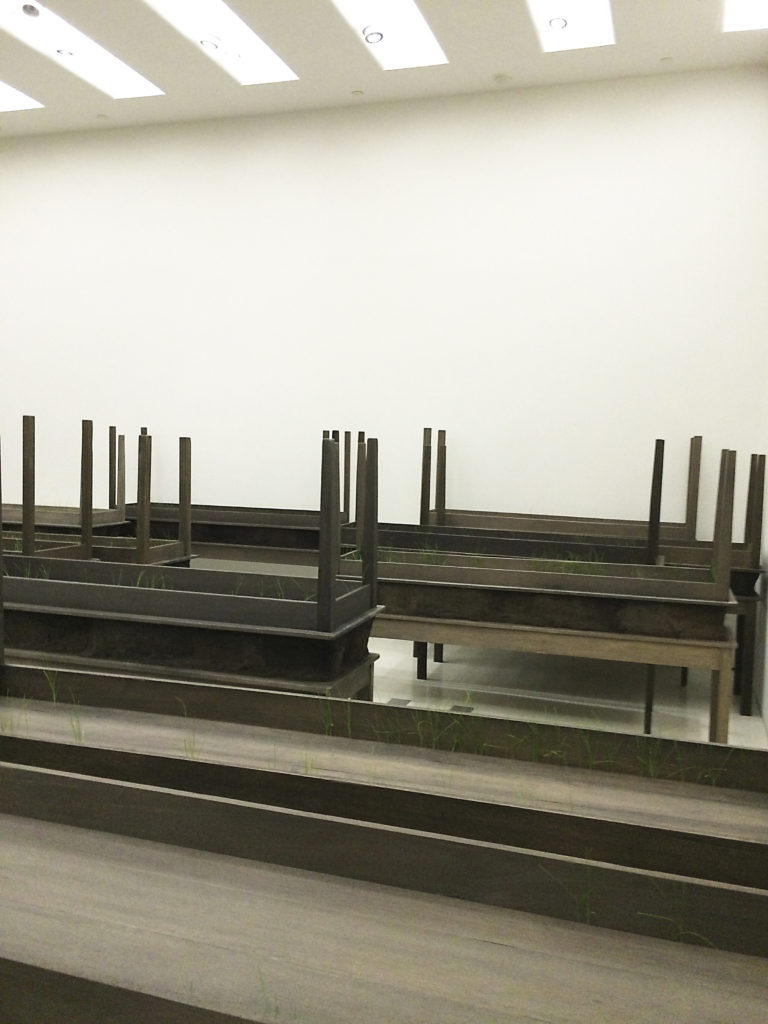 While exploring New York City in July of last year, I learned that a retrospective exhibition of her works was being held at the Solomon R. Guggenheim Museum. Having never seen any of her work outside the lecture room, I was eager to better understand the compelling and enigmatic prose her art composes.

At first glance, Doris Salcedo’s retrospective exhibition may have appeared, to the unacquainted, as a collection of vintage furniture store outcasts. Wardrobes, bed frames, and chairs functionally hindered by poured concrete, stacked tables fostering the growth of grass from their scarred surfaces; her works challenge the viewer to look within, and metaphysically beyond them to fully assimilate their significance. Salcedo’s works, as well as those of other Latin American artists, often take the shape of requiems for lost freedom, justice, and life, whether as a result of violence, the residual effects of colonialism, or governmental and military oppression. 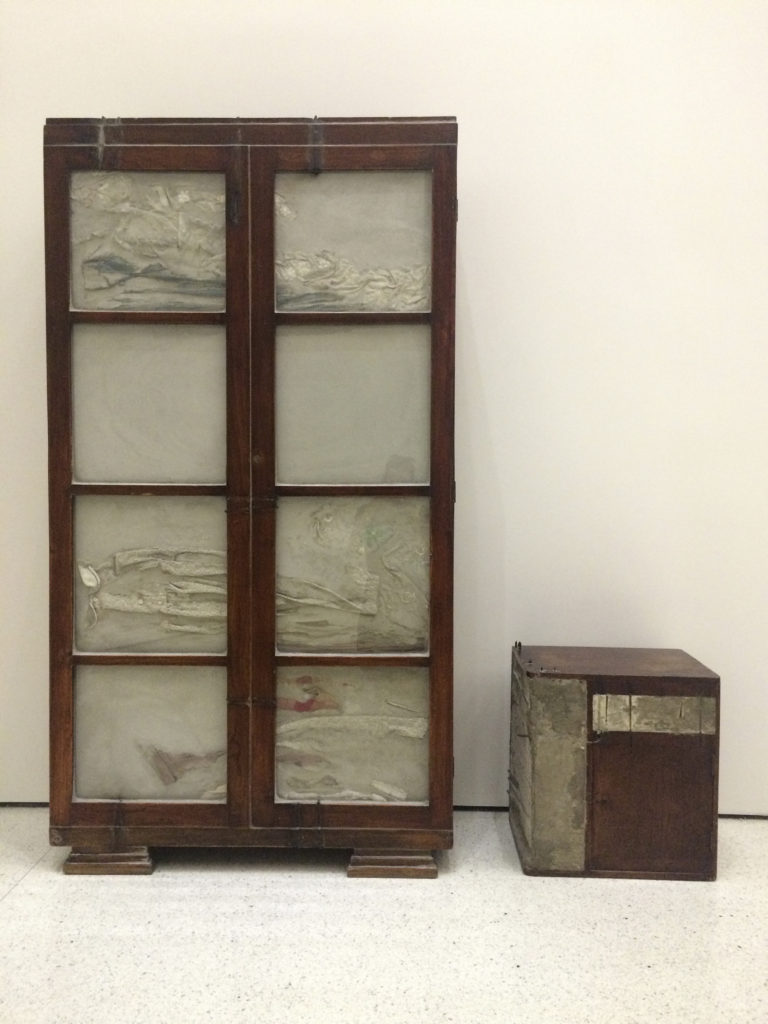 Making its American debut at the retrospective, Salcedo’s large installation, Plegaria Muda, embodies the notion of artwork being utilized to memorialize loss. Loosely translating to “silent prayer” and intending to evoke the imagery of graves en masse, Plegaria Muda was inspired by the loss of life due to gang- and military-related violence in Los Angeles and her native Colombia. Similarly full of sorrow and remembrance, A Flor de Piel was created as a response to the tragedy of a female nurse who was tortured to death in Colombia. The work—a large shroud of individual rose petals stitched together, spanning over twelve feet long and seven feet wide—fills an entire room and commands the viewer’s unmitigated attention and reflection. The idiomatic phrase of the title, which literally likens flesh to the fragility of flowers, suggests one being overcome with raw emotion and sensitivity. 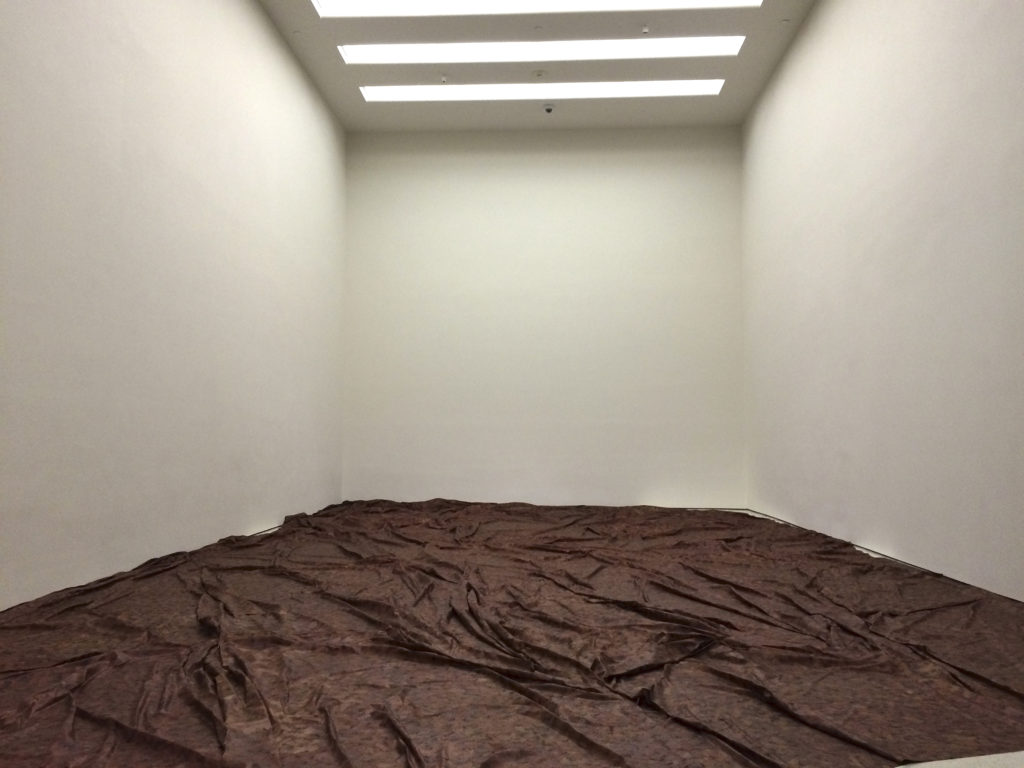 The term “retrospective” proves an apt and multifaceted application of Salcedo’s works. Her work is vestigial, mournful, and symbolic, culminating in a powerful collection that leaves the viewer in a state of quiet lament. Her work can evoke a sense of calm; a conciliating white noise fills the empty space in the galleries where her works stoically sit. Though Salcedo also spends a significant amount of time creating public installations, the more formal setting of a gallery neither hinders the sheer force, nor mutes the stentorian voice of her creations.

Through her works, Salcedo reflects on and honors lives lost and tragically altered by sociopolitical violence and injustice. Her work also encourages discourse about the human consequences of corruption in society. With activism being at the forefront of much 20th and 21st century Latin American art, Salcedo’s work demonstrates that she is a leader in the movement of art as a means for change and progress in the realms of politics and culture. 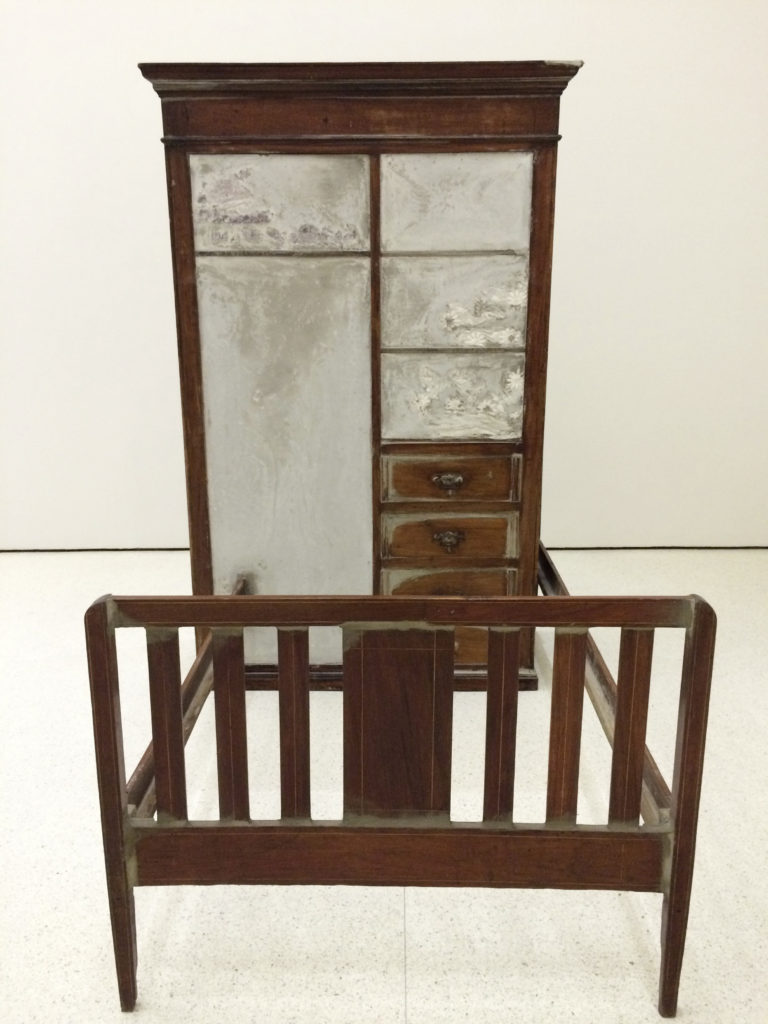 I ended my museum journey in the somewhat clandestine basement of the Guggenheim, where a short film produced by the Museum of Contemporary Art Chicago, “Doris Salcedo’s Public Works,” was being screened as a complement to Salcedo’s exhibition. In the film, Salcedo discusses works apart from those exhibited, as well as her theory and concept of art on a larger scale. “Art does not give answers, only poses questions,” she emphatically says. With that in mind, it is up to us, the beholders of the art and denizens of society, to conceive answers to many of the seemingly unrelenting questions of loss and adversity that her work demands.

I took my last creative writing course at the University of Central Florida in 2013. When it was over, I was relieved. I’d finally have time to finish writing my novel. In lieu of classes, I picked up END_OF_DOCUMENT_TOKEN_TO_BE_REPLACED