Christopher Rodriguez, otherwise known as Tobar, builds emotion with the presence of objects in collections like Man in the Mask, My Dexterous Shadow, and Native. In each of them, he installs symbols like arrows and gas masks that represent a person’s persona. The arrows pierce themselves through the arms and hands of people in Native, evoking the impression of pain, while the gas masks in My Dexterous Shadow provide a sense of mystery to the viewer. I sat down with Tobar one afternoon to talk about the evolution of these symbols and how he plans to use them in future works. 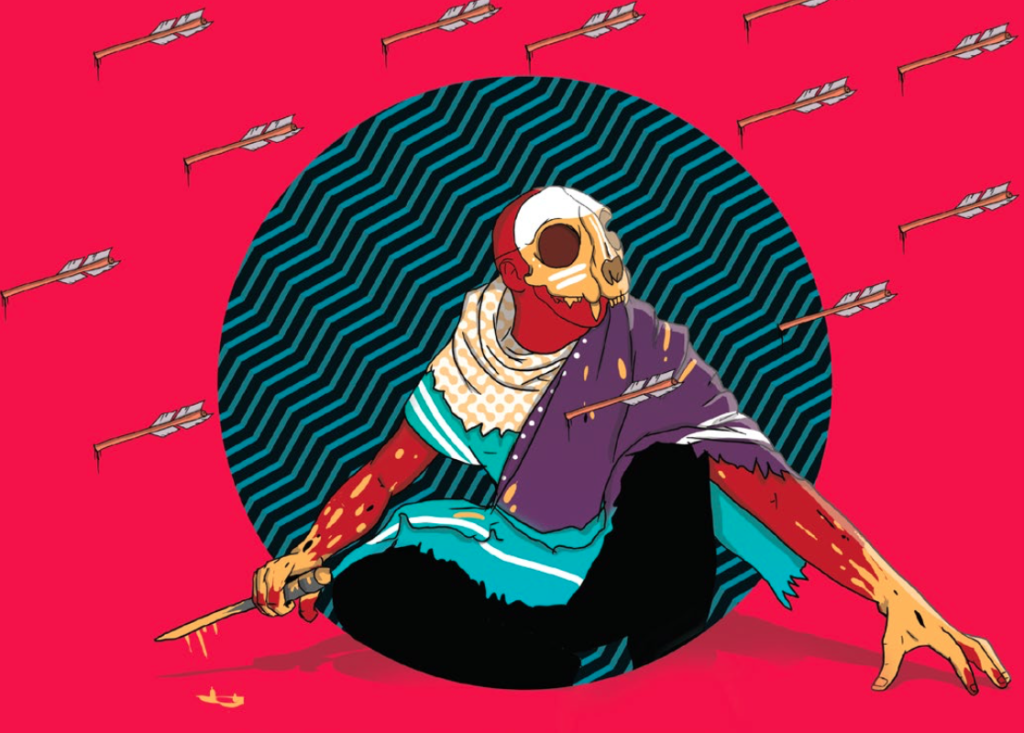 Avoid at All Cost, mixed media

“At some point in their life, everyone wears a gas mask”, Tobar says about the object’s presence. Metaphorically, people wear it to protect their raw identity from the rest of the world. The object makes its debut in Man in the Mask, a collection that features a man wearing a gas mask to protect himself from the outside world—a world that will try and persuade him into reconsidering his ideas of self and creativity. However, by putting on the mask, he also chooses to live inside the persona of someone else, much like how Batman chooses to wear a mask because of the danger that threatens his personal life if discovered as Bruce Wayne.

This theory presents itself in Tobar’s 2013 series Unmasked, which features superheroes like Wolverine, Batman, and The Flash with their faces hidden by these gas masks. Each superhero holds onto the rim of his mask, poised to remove it, but not giving in to the urge. However, Tobar says that the series “isn’t supposed to be a super-metaphor” since all superheroes try to keep their identity a secret. His light hearted persona makes its way through other collections like The Urban Jungle, which features a young boy’s imagination taking physical form in the shape of animals, all of which are wearing Tobar’s gas masks. 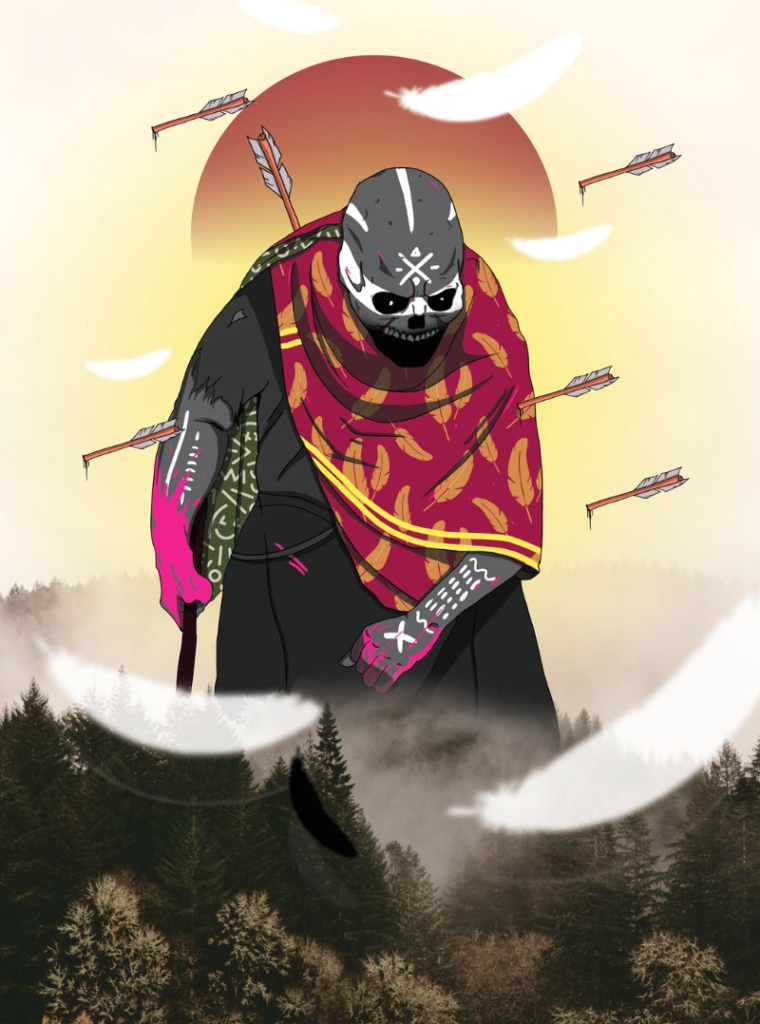 In Big Bear and the Bird—Wearing Gas Mask, a bear holds a bird in its paw. This concept follows the original idea of the mask in that it hides the true nature of the bear, a creature that may peacefully coexist with, rather than harm, a small bird. This misrepresentation of its identity associates it with a persona that individuals try live under in lieu of living authentically. “Everyone’s portraying something that they’re not,” Tobar posits about both himself and others. However, as people learn to feel comfortable with themselves in time, they eventually remove the mask.

In 2008, Tobar became part of a collective group of creatives called The B-Side Artists. Each weekend, the group sets up their pieces to sell in Downtown Orlando. Sometimes they don’t sell anything, but that fact never becomes a factor in stopping or slowing their momentum. Their presence grows bigger as more and more join over the years. Tobar reflects on this collective ritual with a bit of nostalgia, saying, “We don’t get together as much as we used to. Everyone started doing their own thing.” The group now shows once a year at the City Arts Factory. 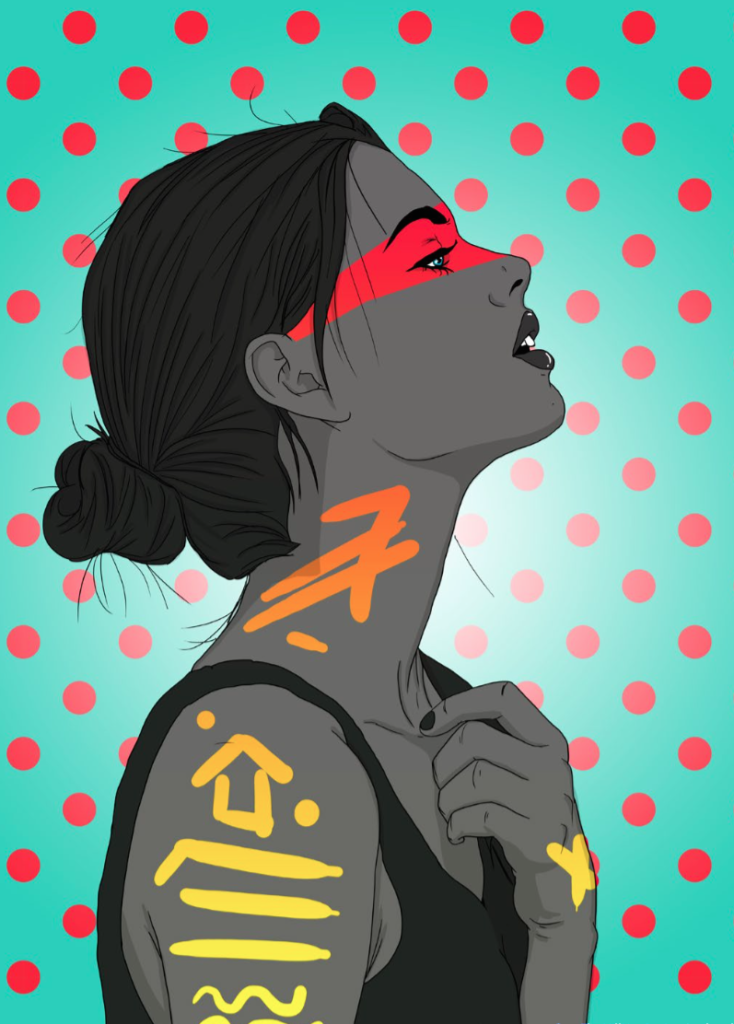 Over The Hill You See It, mixed media

Although the experience of presenting one’s work in a gallery differs from that on the street, both allow Tobar to use his voice in new and interesting ways. In 2013, he set up a month-long show titled My Dexterous Shadow, which allowed people the chance to learn more about the ubiquitous gas mask. Each person followed a map through the local districts to find hidden pieces of art. The project stretched geographically from Winter Park, to College Park, to Ivanhoe Village, and Colonialtown. In this collection, pieces like Lost at Sea showcase Tobar’s sense of vivid commotion, as a masked woman sits in front of a colorful cloud of pink, blue, and yellow.

Tobar continues this kind of urban exposure in an event called “Octobar” that takes place each October; he sets up a scavenger hunt for people to follow throughout the city. These events always showcase newer pieces that Tobar creates, but one thing remains the same. In each collection, one will find the use of female models. Pieces in Tobar’s latest collection, Native, feature women dressed up as warriors. They show off their emotions in the form of stances, swords and tribal tattoos. The triangles represent either a closed-minded person (if it points down) and an open-minded one if pointing up. Circles symbolize a well-rounded person who discusses their feelings with others, while a box will appear on a figure who refuses to talk about their experiences.

The pictures become captivating in the sense that each one features large areas of negative space, in which Tobar fills with color and shapes. For example, red dots float behind the portrait of a young woman covered in paint. These shapes represent the “flow” that a person follow in life. However, these currents might conceal someone’s identity because of how they act and not for their thoughts and feelings. 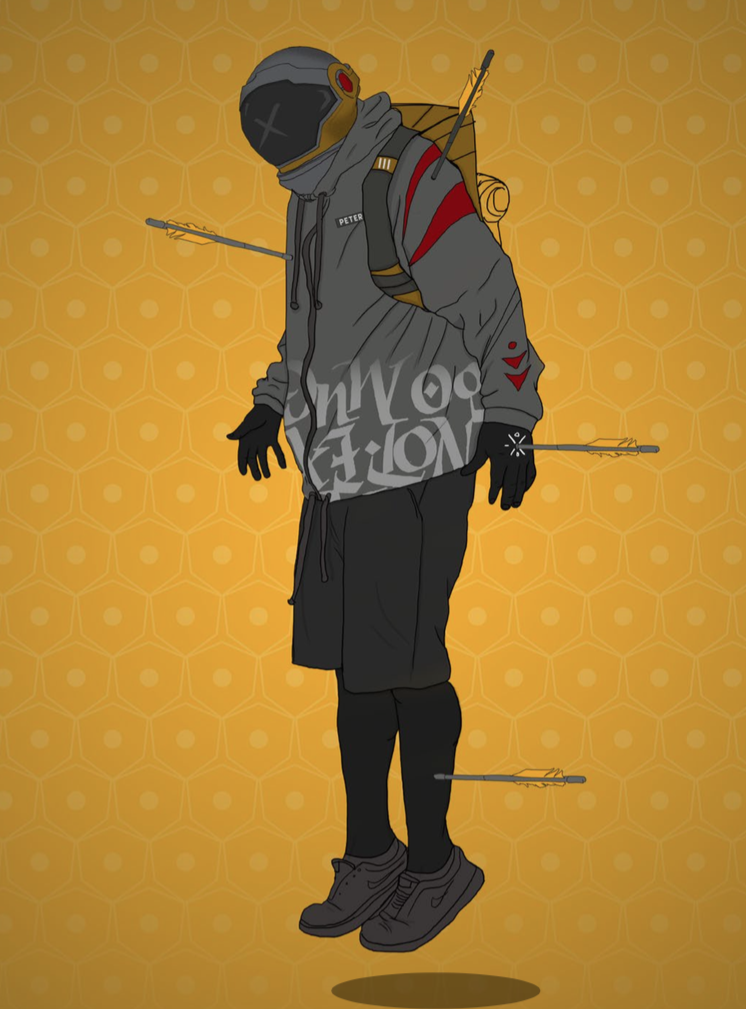 Each woman comes to her own understanding of the self after the fact. For example, a woman wearing a bunny mask touches her face with two hands covered in what looks like blood. An arrow on her arm points towards a bird. “The arrows are metaphors for the things that other people want in your life,” Tobar says about the symbol. This interpretation allows the viewer to imagine how the people in Native came to their senses. A woman with arrows protruding out of her arms continues to hold a baby, despite the pain. The text on the side, borrowed from Beatles lyrics, reads, “Wonder how you manage to make ends meet.” A moment like this reflects a subject’s internal and individual struggle while Tobar’s Orlando United conveys that of an entire community and city.

Two hands, one black and the other white, clasp one another in front of the Pulse nightclub. The color choice for the piece represents a lesson that Tobar continues to rediscover in his work, “that we all want something different.” In Urban Jungle, that message came across in the manner of interaction between the bird and bear, as a smaller creature sits on the paw of a much larger one because of the intrinsic trust between them. Each of their identities become ambiguous to the viewer as in the superheroes of Unmasked and the women in Native. Each subject remains a mystery to the world until they feel comfortable with removing the mask on their own terms. 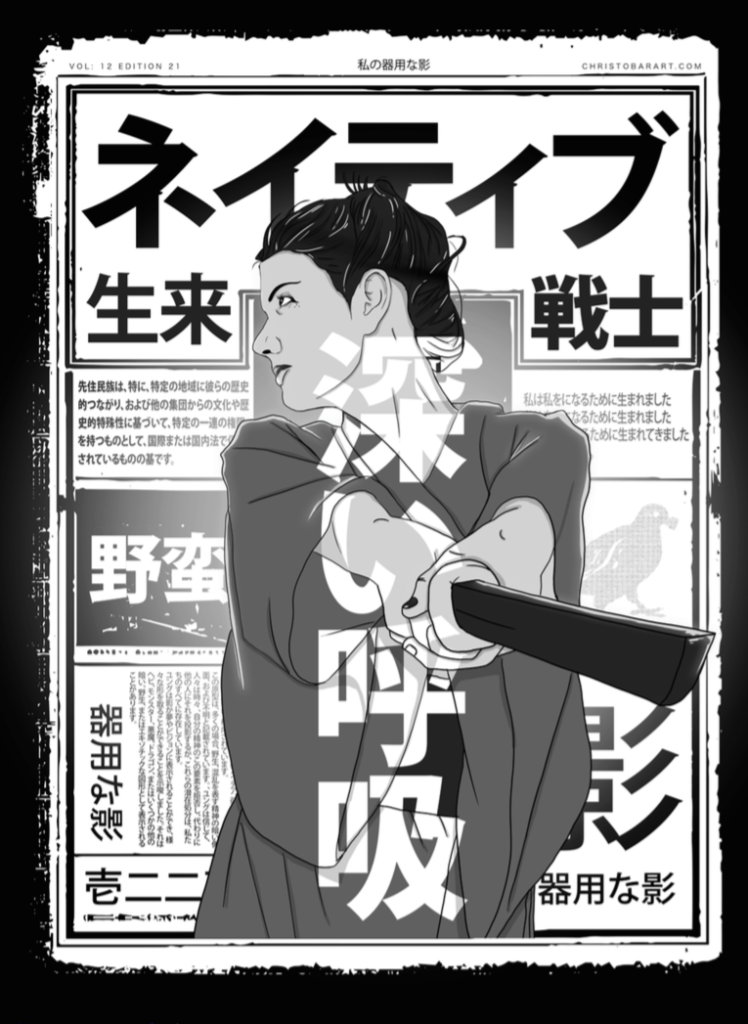 What R U Waiting For, mixed media 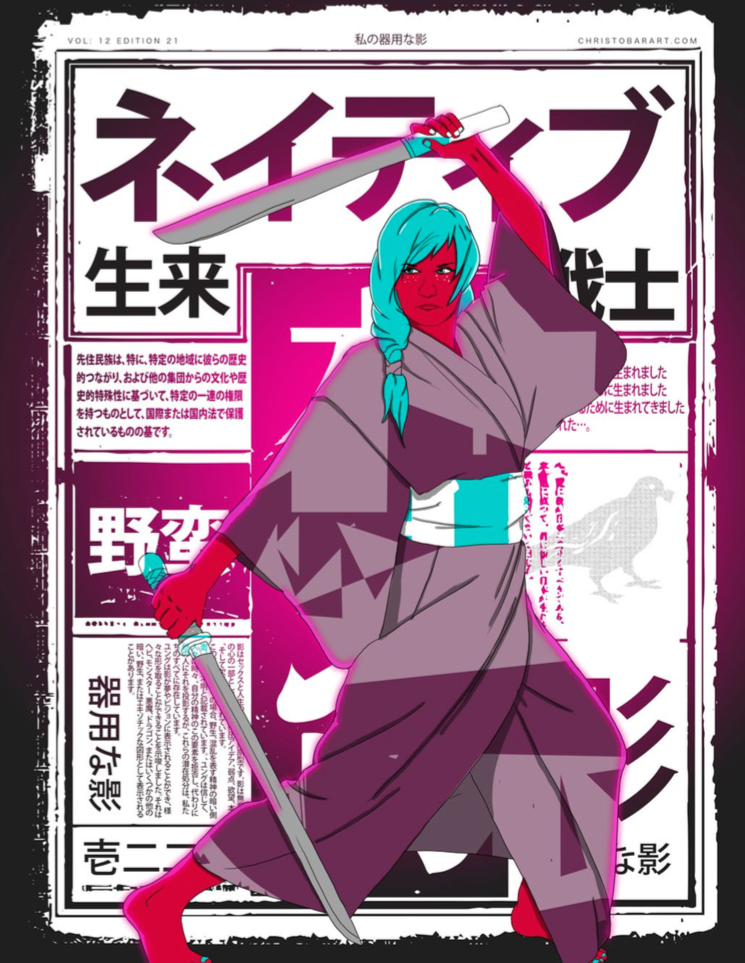 In the future, Tobar hopes to instill his characters with a darker palette of emotions. Although some images already seem dark, like the bunny-masked woman, they all speak to a brighter state of mind. The bunny-masked figure finds comfort in her sacrifice, while the subject in Lost at Sea withstands and embraces the colorful chaos. “I haven’t used the ‘anger’ side of it all,” Tobar says about his past work, because he doesn’t want to create any violence in the world. This reasoning prompted him to remove the arrows from the Orlando United poster’s original form. However, he still wants to be able to tell the “dark side” of an event or feeling, as emotions of loss, grief, shame, and disappointment also shape and inform people’s lives as much as positive ones. 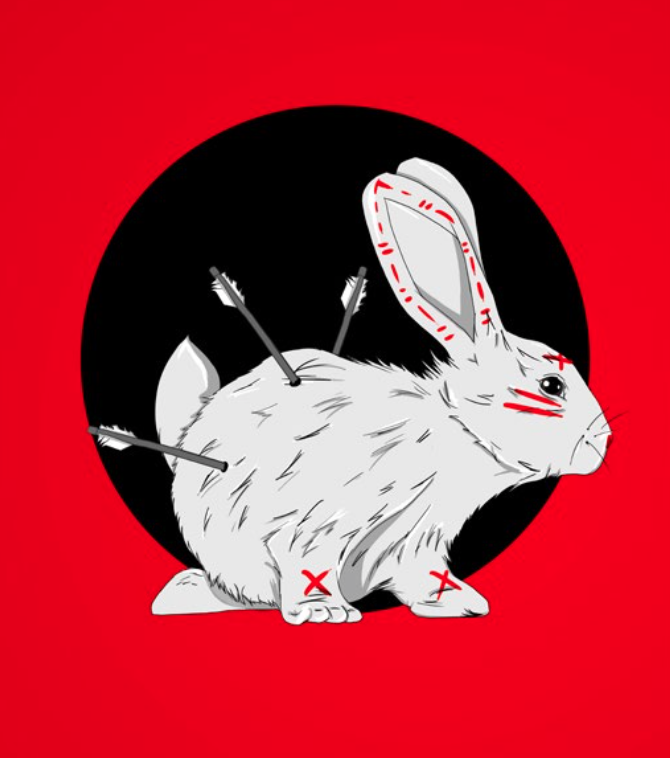 The challenge of welding a new set of emotions onto old objects presents a challenge for Tobar. He wants to make a collection that older fans, people that have followed him since Man in the Mask, can both understand and appreciate. This evolution of style may come in the form of further abstractions with symbolic geometry. More recent collections like Native already show how Tobar stepping further into a style that expresses both vulnerability and inner strength.

You can see more at: ChrisTobarArt.com

One thought on “Chris “Tobar” Rodriguez: A Unity of Self”

Samantha Shumaker is a young artist tackling old stories; from Greco-Roman mythology, to Native American culture, and her own fear of doomsday. She is creating new art that resonates with all walks of END_OF_DOCUMENT_TOKEN_TO_BE_REPLACED