Ten years after Hurricane Katrina made landfall in New Orleans, cultural geographers Glen Gentry and Derek Alderman conducted interviews on tattooing and healing after trauma. These narratives were published as Trauma Written in Flesh: Tattoos as Memorials and Stories, which is readable online. In their estimation, thousands of individuals affected by Hurricane Katrina have been tattooed with scenes depicting the chaos of the storm, symbols broadcasting their shared survival narratives, such as the ‘X’ that marked the doors of houses that were searched for survivors, or memorials to individuals who died during or in the aftermath of the catastrophe. 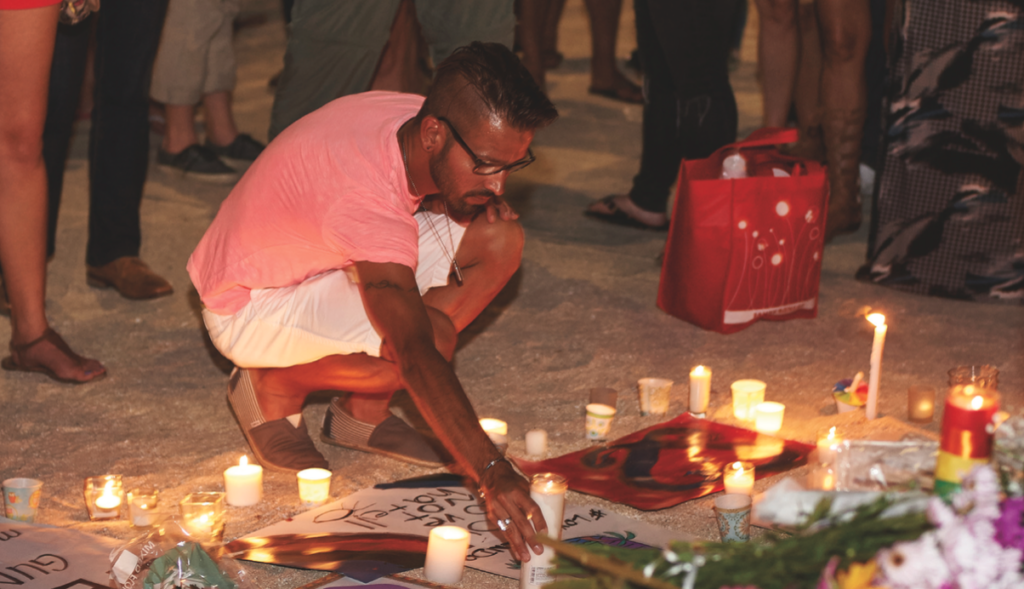 In July 2016, I attended the first Twisted Tuesday/Dorm Party hosted at The Abbey. I documented that night on my blog, noting that much was familiar and welcoming, but also that “There were some things that were undeniably different/changed: virtually everyone had some kind of Pulse tattoo,” including myself.

Three weeks prior, I went with my friend (for the sake of protecting his privacy, we’ll call him Franco) to our “home” tattoo studio to get corresponding pieces of Pulse flash done.

Franco and I had been best friends on-and-off through ups-and-downs for 10 years, and for six of those, we were on-and-off regulars at Pulse, corresponding with our on/off relationship. We christened most of our new friendships and romantic relationships there and celebrated most of our personal milestones there. Birthdays. Pronoun changes. Name changes. We aired out our grievances on the dance floor. Sometimes we went in plainclothes. But somewhere on the internet, there is photo evidence of us going in full-on cosplay.

Our history at Studio XIII in Waterford was similar. Like Pulse, it was a safe and welcoming space that gave us a venue to commemorate our landmark achievements in ways authentic to our truth. When the charity flash page was posted to their social media, two pieces matched our stories perfectly. For Franco, it was an orange shaped like a traditional heart symbol. For myself, it was a bleeding anatomic heart shaded in rainbow. We got these on the insides of our left wrists, just adjacent to where a pulse is typically taken.

According to Gentry and Alderman, “Tattoos provide a means by which those affected by Katrina can express and deal with their memories of trauma and place attachment, a way to make these feelings visible not only to themselves on a daily basis but also to a larger public.”

But for myself and for Franco, there was an element of careful discretion in our choices. Franco wanted the orange “because it would be important to [him] while not constantly reminding [him] that the club was gone or what had happened there.” Mine allowed me to code myself to be recognized by other LGBT-identified folk while sliding past the leering gazes of bigots in my field. It was a technique I picked up from fervent years of reading academic “queer theory” and reconciling two worlds: the one where I was “out” and the one where I was invisible.

Between the two of us, our stories are similar, but unique. Likewise, we are connected to the collective and the individual experiences of those other individuals who have marked themselves with pride hearts, City Beautiful skylines and the iconic EKG. All manner of LGBT-aligned and LGBT-allied Orlandoans were inked as a testament to Pulse as sacred, unified ground. Several of these individuals were photographed by Carrie Moran, UCF librarian and president of the school’s Pride Faculty and Staff Association, for an upcoming exhibit at the campus art gallery titled Resilience: Remembering Pulse.

While neither Franco nor myself are featured in this exhibit, we identify with this resilience and feel a camaraderie with Orlandoans who have been inked. Since our college days, we’ve independently moved farther and farther out in opposite directions from the radius of Orlando. Just as Pulse was our figurative middle ground in our roller coaster friendship, it was also our literal middle meeting ground.

“The tattoo was a way for me to contribute, even a little, to help our community rebuild,” he told me. “There’s a sense of feeling like I have to do something or give my life meaning because I was left alive of it all in the general sense. The feeling that there were and are people out there who hate us so much that they’ll commit these heinous acts. That a place meant as a safe space, meant as a place where you can truly be yourself, can get ripped away in the span of one night.” 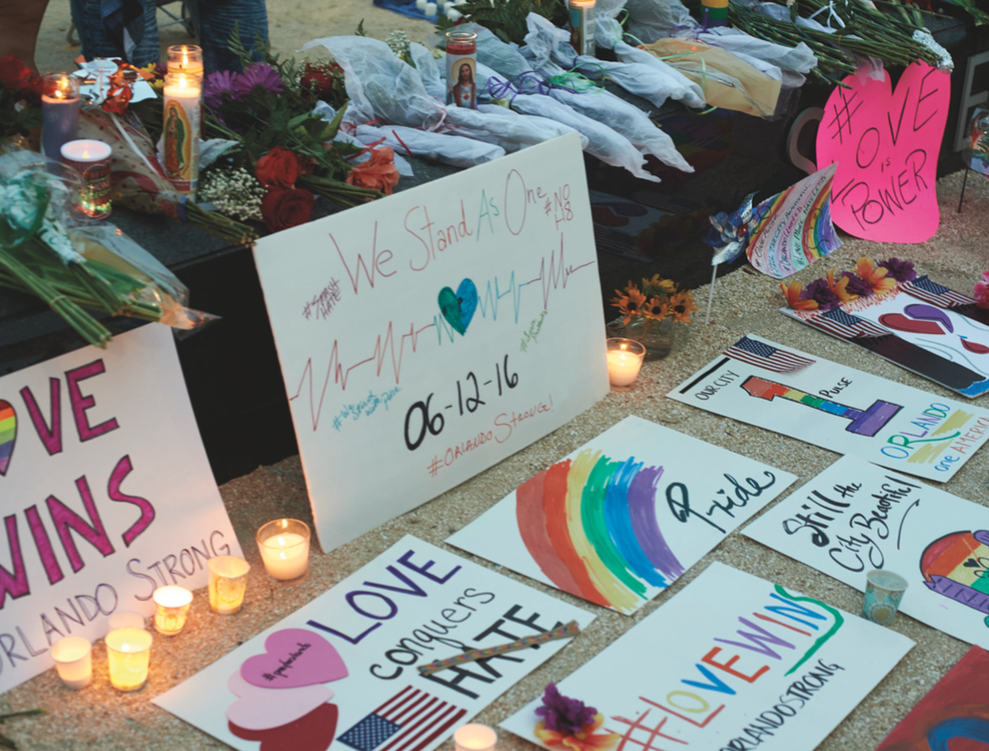 A year out, the healing process is setting in and the trauma is beginning to reverse metastasis. Slowly. Irregularly. Not without risk of being distorted, discolored, distended, or otherwise further damaged.

There have been frequent discussions of scar care and optional scar removal during the several consults and appointments I’ve sat through anticipating gender affirming surgery. At one of my intake labs, a phlebotomist commented on my “new tattoo” before realizing it was broaching on being a year old. “Such vivid, pretty colors,” she said. “It looks like you just got it done. You must be taking good care.”

Alderman’s summary of Katrina tattoos mirrors much of the murmur following Pulse: “Given that the recovery from Katrina has been socially and geographically uneven depending on race, ethnicity, income, and neighborhood, the legacy [of Katrina] ten years later may mean that these tattoos mark stories, memories, and trauma that are still rather fresh and emotionally charged for many.”

Comparing my tattoo today to a picture I took the day I had it inked, the similarity is striking. Some part of me has entertained the supernatural prospect that the tattoo might actually still be fresh. Some days the hurt really does feel fresh.

Franco commiserates. “The tattoo is permanent much like the scars left by the shooting will be. It’s a constant reminder, but one that doesn’t fill me with anxiety. It’s one that shows that we’re a bunch of cockroach motherfuckers and we aren’t going anywhere.”

One thought on “Permanent Scars: One Year Out”

Some people associate skulls with death, but Nicholas Boyd, who paints under the pseudonym Loaf, sees them as a symbol of life as well. Wary of becoming a skull painter, Boyd tries to expand the END_OF_DOCUMENT_TOKEN_TO_BE_REPLACED