Kalup Linzy stays busy. Between a professorship appointment at SVA, multiple residencies on the horizon, creating new artwork, exercising his social prowess within the art world, and opening exhibitions, it’s hard to believe that the New York City-based video and performance artist has time to sleep at night. Linzy is easily one of the most sought-after artists of the decade, with an unparalleled career trajectory that is continuously moving onward and upward. A few weeks ago, I had the pleasure of speaking with Linzy via Skype while he was in Florida installing his latest exhibition James Franco and Kalup Linzy: Collaborations at the Bob Rauschenberg Gallery at Florida Southwestern State University in Fort Myers. 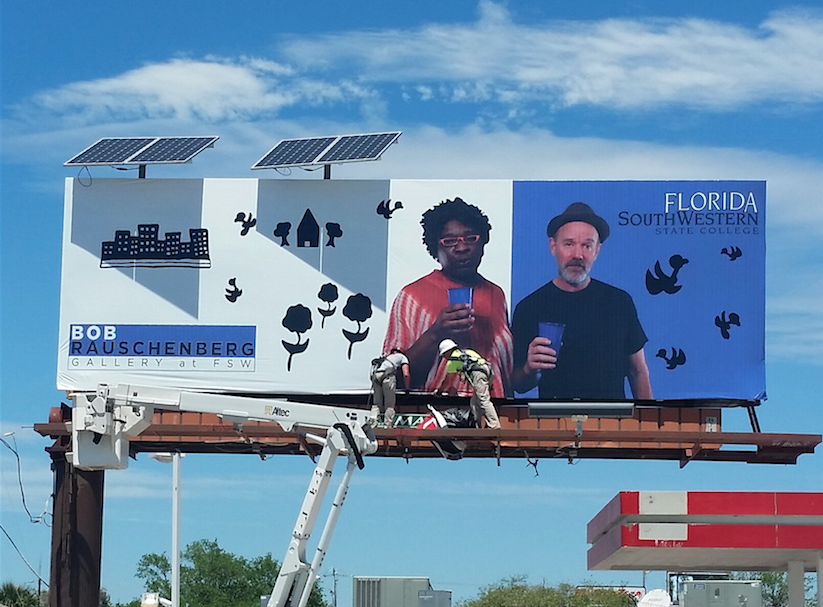 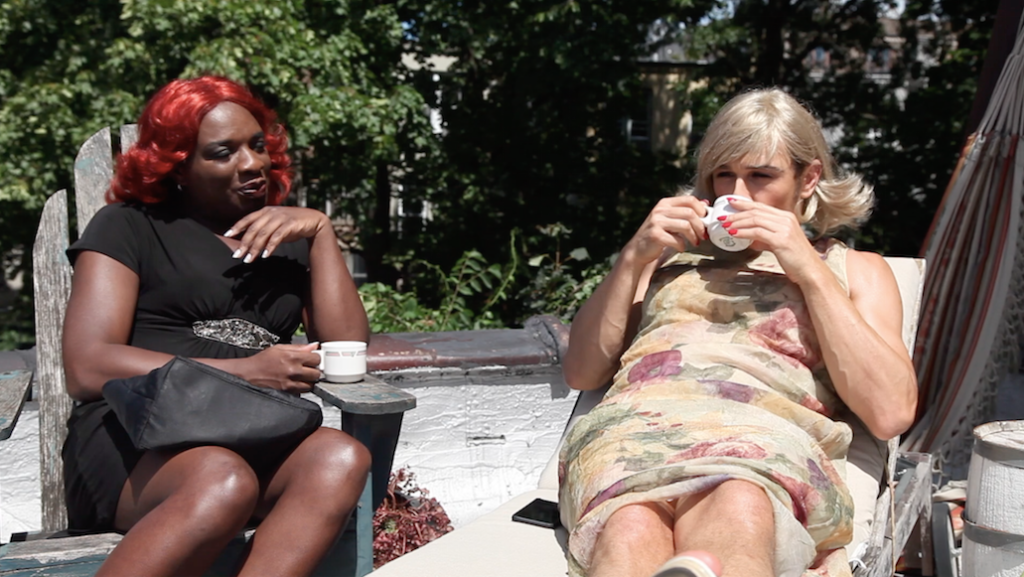 Watching his films, it doesn’t take much to understand why the world has become enamored with Linzy. There is a direct intentionality to his work—not much is left to chance. Linzy seeks a lo-fi aesthetic in his films, which he writes, produces, directs, scores, and acts in. Linzy pushes the bounds even further by voicing over the entire script. When you watch Linzy’s films, you are being invited into a space that is uniquely his own. Relying on stereotypes, Linzy provides a satirical look at the entertainment industry and the art world. We also watch his characters navigate the complexities of societal systems and confront issues concerning sexuality, gender, and race through the lens of a soap opera. Using serial storytelling as a platform of expression, Linzy creates a parallel universe of drama, satire, and intrigue which anyone can dive into with a simple click of a YouTube link.

Linzy was born in Clermont and raised in Stuckey, FL by his grandmother, Georgianna Linzy. In our conversation, Linzy told me his grandmother was a quilter, who was in turn taught by her grandmother. “I used to watch her quilt all during my childhood,” says Linzy, adding that he considers his grandmother and great-great-grandmother to be the first artists in the family. “I look at some of her work and I think ‘Oh my gosh, the collage patterns I work with must come from that!’” 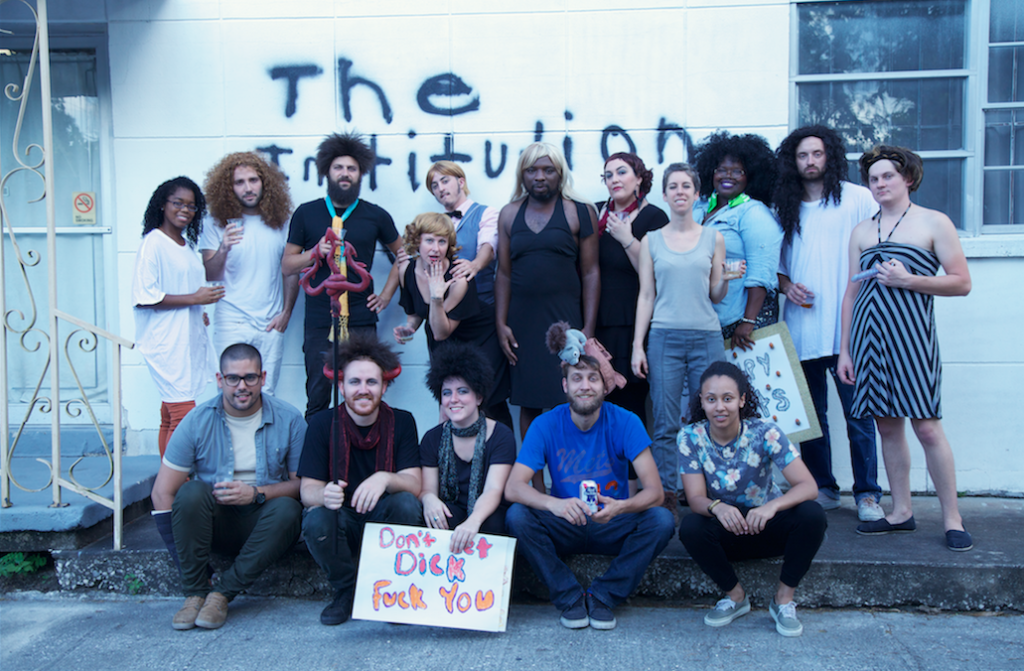 Cast of As Da Art World Might Turn, Season 1, 2013. Image courtesy of the artist

In 2003, Linzy moved to New York City after receiving his MFA from the University of South Florida that same year. While still in school, Linzy’s support from USF faculty, as well as an intensive residency at the Skowhegan School of Painting & Sculpture in Maine, allowed him to build a strong network of curators, collectors, and fellow artists. “I was putting the work out there, going off natural instincts, and almost letting things fall where they fell,” says Linzy. “I just kept making work.” 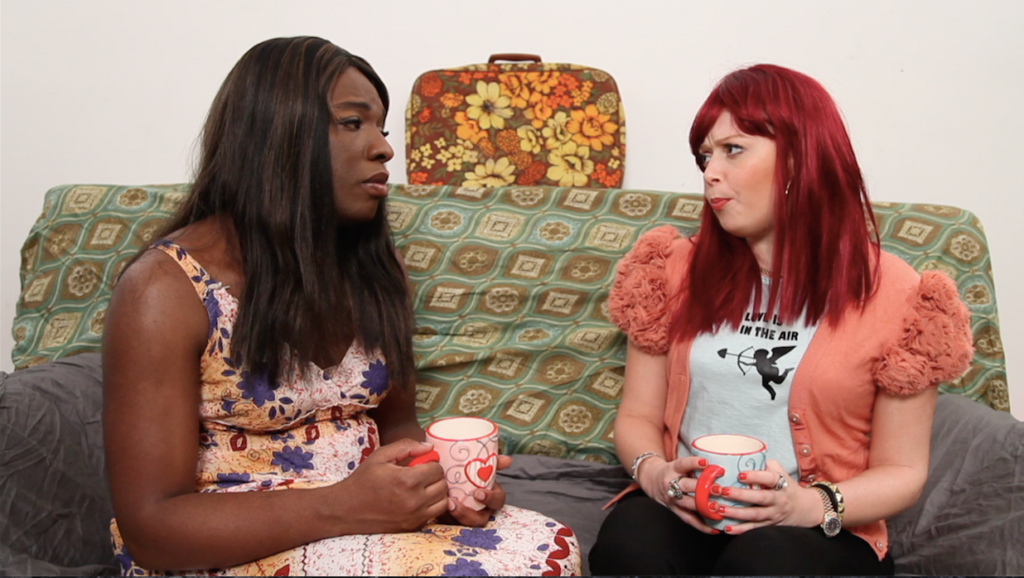 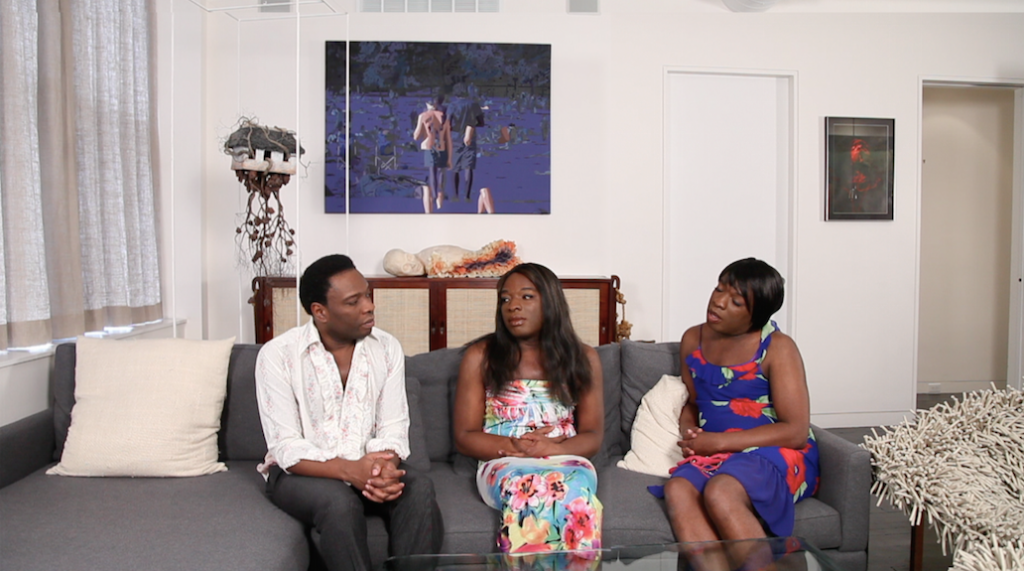 Today, Linzy is based in New York City, but spends considerable time in the Tampa area where he was raised. “It’s in my nature,” says Linzy in regard to his home state. He mentioned that living between two places—Florida and New York—is not necessarily a glamorous lifestyle, but it helps him maintain a balance.

“In the beginning when I started creating the work,” Linzy states, “I thought it would only survive if it was something people could engage with; if I was outside of Florida. Work like mine wasn’t existing in art spaces here. When I moved to New York, it became more about making work that fit into that community—which was mostly an art community. I think that since then the conversations around gender and sexuality in the mainstream have changed. People are now trying to understand how to deal with it.”

Linzy has utilized YouTube as a method of distribution for decades, making his work abundantly available to the public through the internet. “It’s always been an extension of my studio,” he says of his use of YouTube. “I began by sending links to curators and collectors, and it ended up opening another universe to me because it broadened my audience.” Casting a wide net through the video sharing website has proven to be a successful way to make his artwork and the themes he addresses accessible to the mainstream.

“I think artwork should be as accessible as possible,” posits Linzy. “There should be spaces that are accessible because we are dealing with tough issues which affect people in their everyday lives. It really helps shift mindsets. I think of artists as a mirror sometimes, because I think there are so many people who go through their day-to-day life and are not reflecting. Artists give us that space to reflect it.” 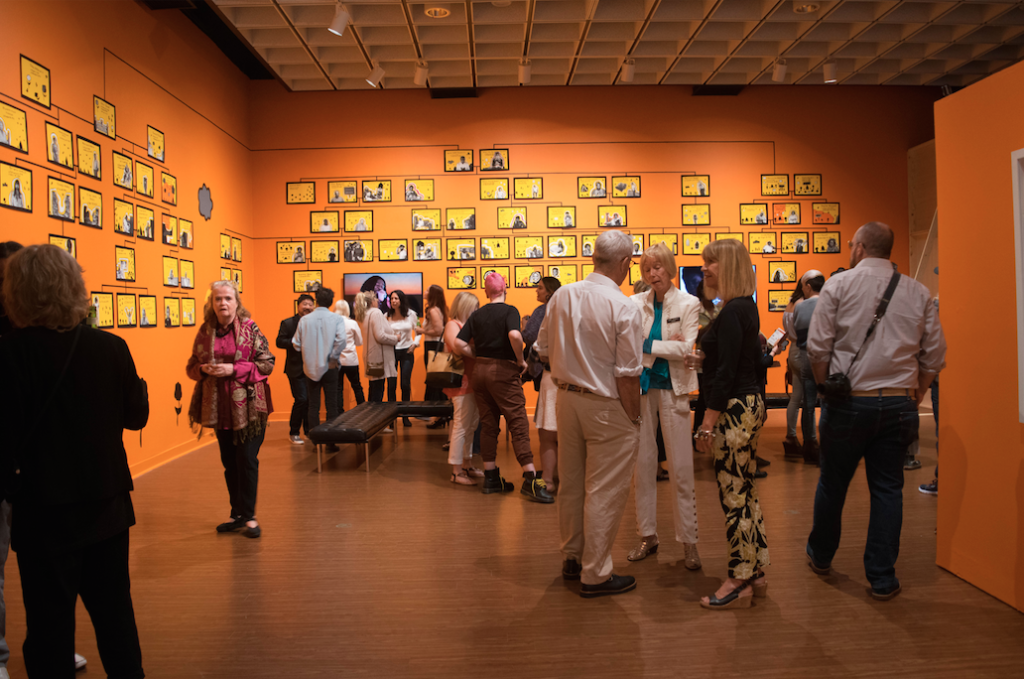 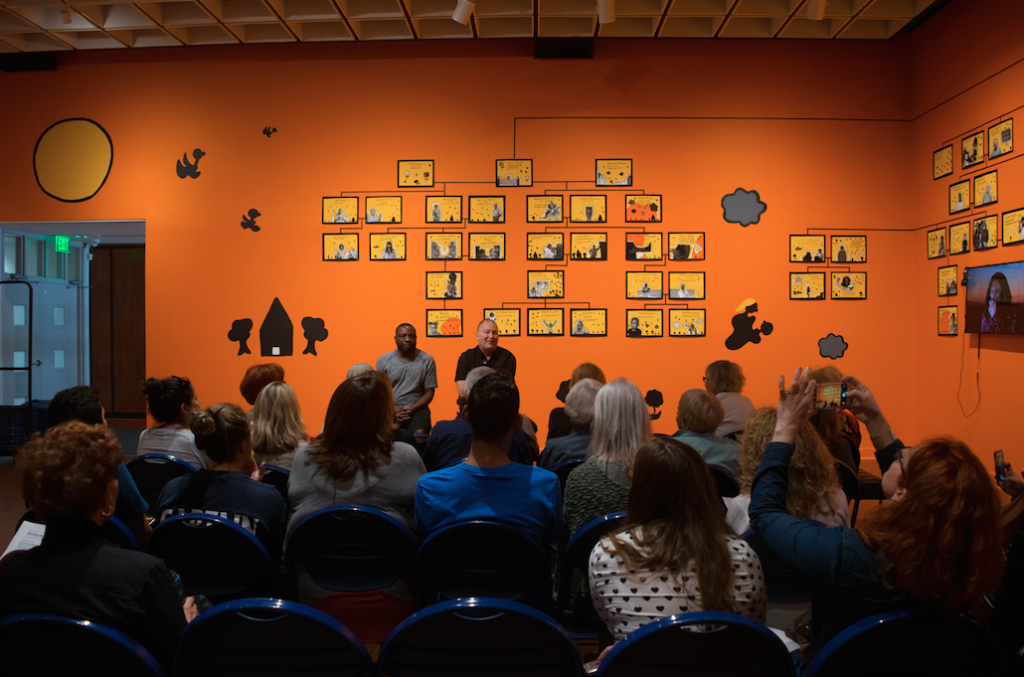 At the Bob Rauschenberg Gallery in Fort Myers, FL, Linzy has created a space for visitors to safely spark conversations of this nature. “That’s how you have a discussion, if you put characters in front of people that are not one-dimensional, then you can have conversations about stereotypes.”

Linzy shared with me that Collaborations is a much more immersive experience than exhibitions he has participated in in the past. He felt the installation process allowed him to think critically about how to create engaging experiences in future exhibitions. Collaborations utilizes much of Linzy’s 2D work, including the complete family tree of the Queen Rose family. The Queen Rose family consists of all of his characters whose lives are so deeply intertwined, including the infamous Kaye, Katoyna, and Taiwan. 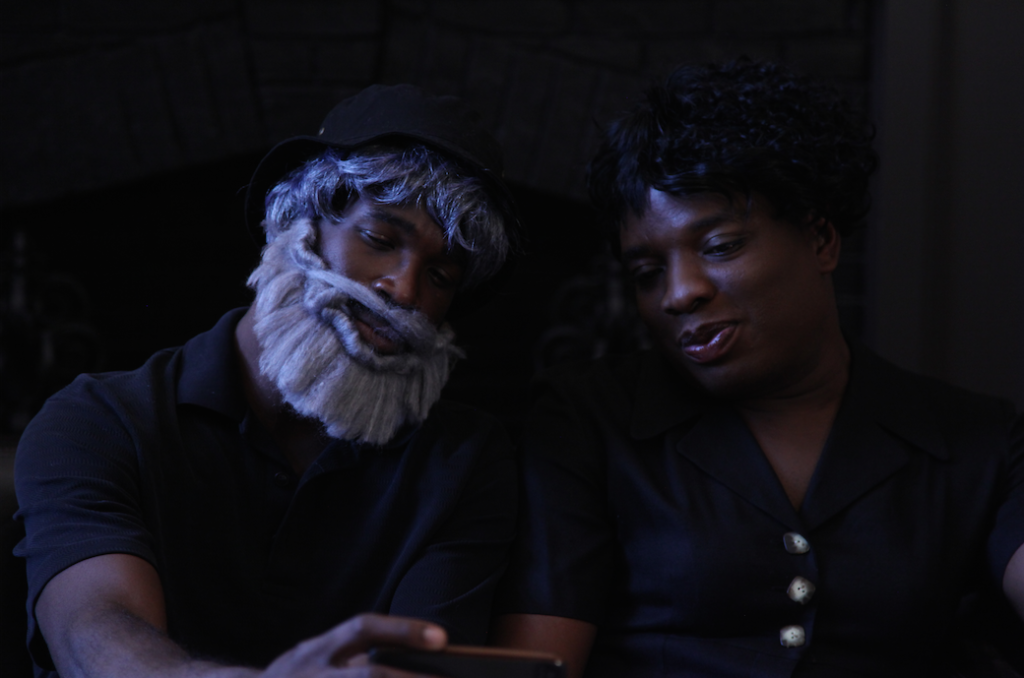 Alongside the Queen Rose Family Tree and framed photographic portraits of Linzy’s characters are new works by James Franco. Titled the New Film Stills series, Franco recreates through photographic portraiture movie-inspired photos of Cindy Sherman’s iconic images. Also included from Franco are images and films from projects he has collaborated on with Linzy and others. 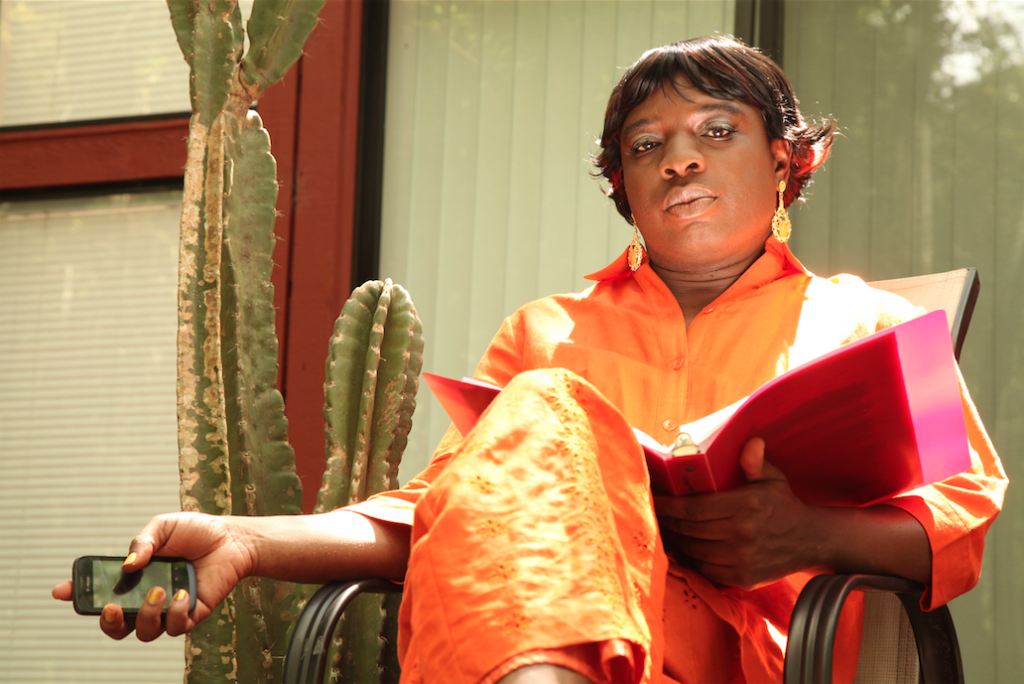 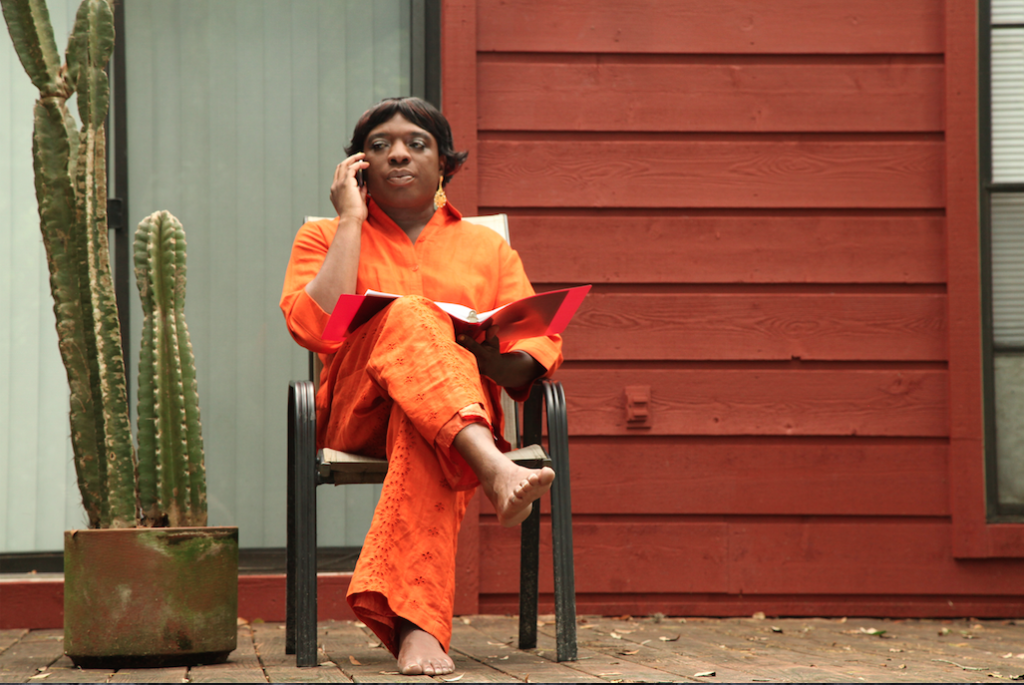 Collaborations is also host to a debut film series created by Linzy and starring Franco. The ten episodes chronicle the lives of the characters Odessa and Katessa as they navigate the tumultuous worlds of art, music, and theater. This series in many ways departs from Linzy’s previous work, as both he and Franco contribute to the voiceovers. In another exciting departure from Linzy’s previous films, the series contains meta-films. These films within the film are also performed by Franco and Linzy.

“I don’t fully understand it,” says Katessa in the series’ teaser trailer, “but I think it may be groundbreaking.”

I think Collaborations is quite groundbreaking, exploring the themes Linzy addresses under the guiding influence of soap-opera dramatics, and referencing films from the Golden Age of Hollywood that he and Franco share a reverence for. With episode titles such as “Torch Song,” “Sweat in the Wind,” and “Whatever Happened to Baby Ozara,” this new series is sure to give viewers the room to reflect on current social issues while providing another juicy story from the lives of Linzy’s characters and the world they live in. Ultimately, Linzy says he hopes visitors leave the exhibition with a better understanding of his trajectory as an artist and the way his life has naturally intertwined with Franco’s. 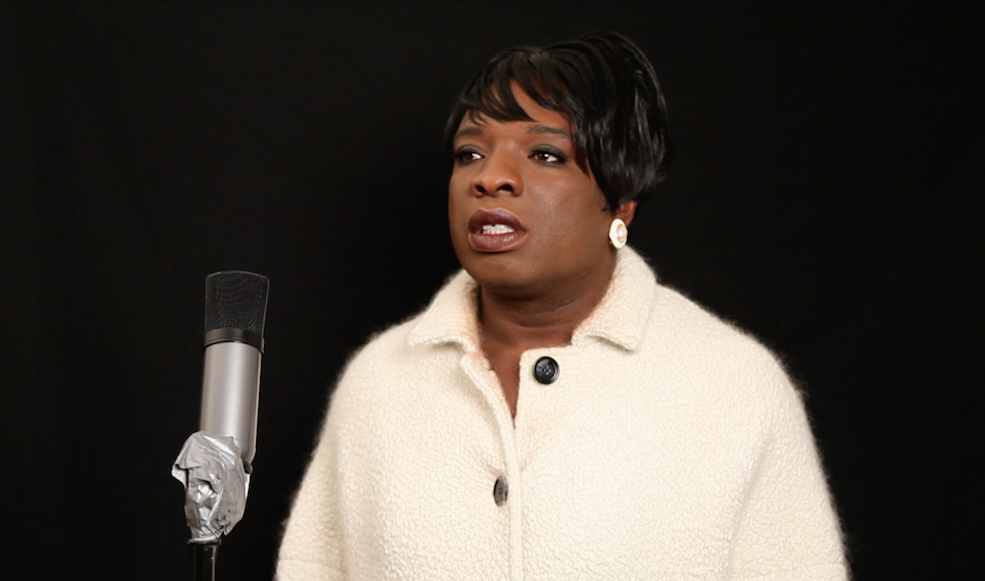 Beyond the opening of Collaborations, Linzy has a multitude of projects on the horizon. In the next two months alone, Linzy will be traveling to Germany to participate in a group exhibition at the Kino Der Kunst Festival Munich, beginning a residency at the MacDowell Colony, shooting a feature film he has written, writing season two of Odessa and Katessa, and shooting music videos for his upcoming album. He will, beyond a doubt, have more artwork to experience in the upcoming year.

As to how Linzy remains so calm despite his bustling schedule, he smiles and says, “I think the world just works in these crazy ways.”

James Franco and Kalup Linzy: Collaborations will be at the Bob Rauschenberg Gallery until June 3, 2017.

One thought on “Producing the Art of Living: Kalup Linzy”

The first time I saw Shayna “Simba” Castano, her shine stole the light from the room. I watched her win the Women of the World poetry slam qualifier with strong pieces about social justice issues. END_OF_DOCUMENT_TOKEN_TO_BE_REPLACED