I have abandoned Orlando for the past two summers to live in Philadelphia and work on my MFA in a low-residency program. I left the city in mourning this June, and found that my own grieving process caught up with me when I entered into those often silent spaces for contemplation: museums and galleries. I reflected on the communities closely impacted by the recent Pulse shooting, and how extended communities become families during times of need.

At the Institute for Contemporary Art Philadelphia, I walked up to the second floor and was immediately drawn to Descent, a show curated by Charlotte Ickes including work by Runo Lagomarsino, mother/daughter performance art duo Matriarch, Virginia Overton, Karina Aguilera Skvirsky, and Lisa Tan. The show features work of artists who are aware of their contexts and predecessors, be they familial, material, or intellectual. 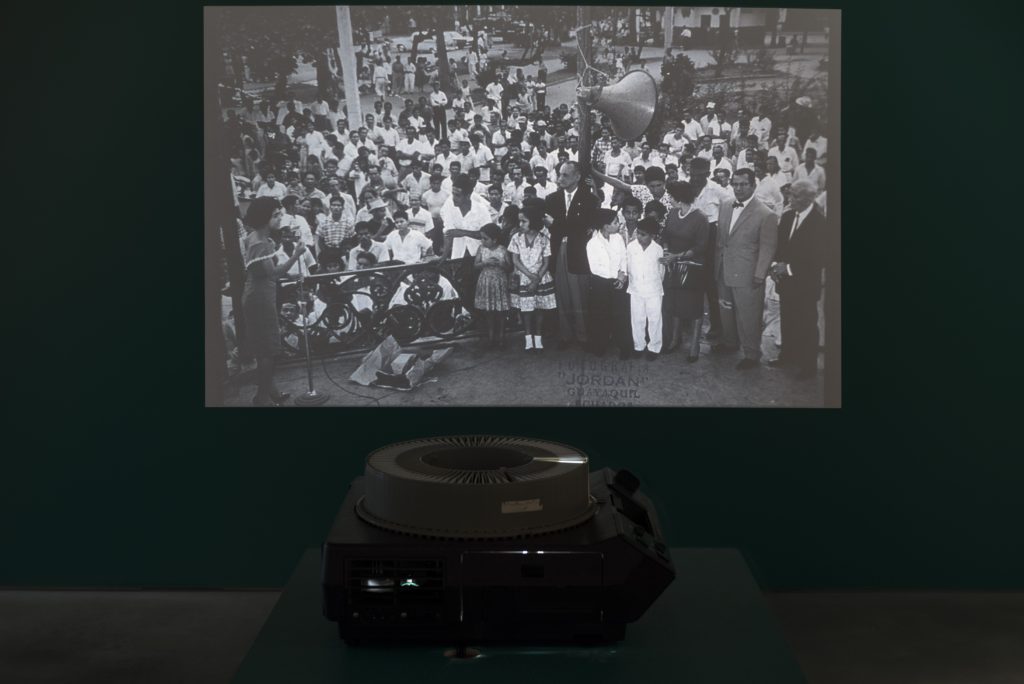 An old Kodak carousel projector cycles through slides of vintage photographs while a woman’s commanding voice reads poetry in Spanish. The whir of the fans and the click-click-click of the projector’s automatic mechanisms fill the Edna S. Tuttleman Gallery with warmth and the sensation of a moment of pastness recaptured. Karina Aguilera Skvirsky’s Los poemas que declamaba mi mamá restages the artist’s mother’s poetry readings in the form of audio, accompanied by projected vintage photographs of the original performances. Skvirsky also activated this installation with a live performance where she read the work of her mother’s poetic influences while dressed in period costume.

As a woman of Hispanic (Colombian) heritage who does not speak Spanish, I feel a poignant sense of longing to understand the words Skvirsky spoke—an unintended point of entry into this particular work for me personally in the context of the show and its rumination on descent (matrilineal or otherwise). I think about how my descent is visible in my body (my dark skin and brown eyes) and obscured in my enculturation. In Florida, I hear Spanish spoken everywhere; the words wash over me. In Philadelphia, not as much, and the rare presence of beautiful sounds of the language awake in me feelings of something treasured and lost. I think about how this is all my mother’s fault and all my father’s fault and also Christopher Colombus’ fault. I think about descent in terms of influence as well as genealogy, history, and place as well as family, genetics, community, and culture. 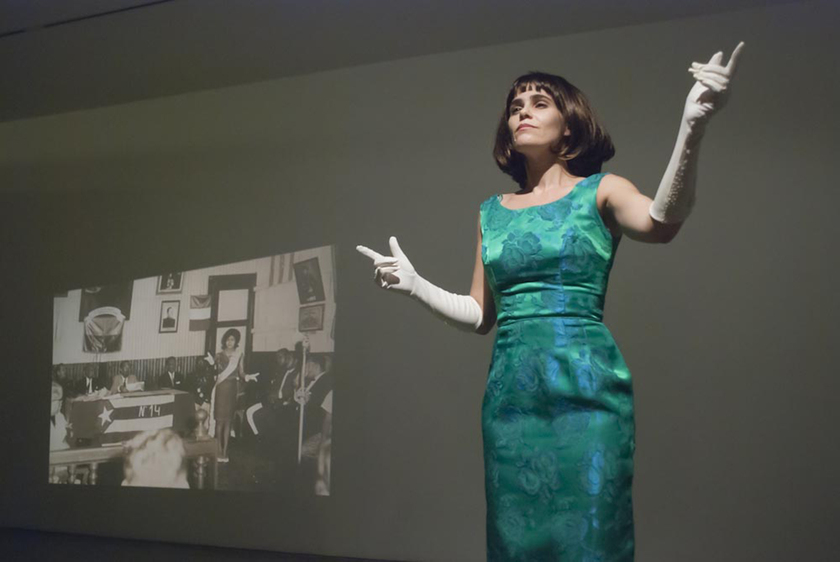 Matriarch (Maren Hassinger and daughter Ava Hassinger) created work specifically for the show, repurposing old programs, shipping boxes, packing peanuts, and drywall all collected from the ICA offices into an installation entitled What Goes Around Comes Around. Out of this waste, Matriarch created mandalas which simultaneously framed and obscured video works. I stood over them and peered into the carefully arranged bits of waste and was surprised to see the moving images of a busy intersection inside. Matriarch activated the installation with a performance (which I did not see) in which they generated “simple, peaceful, loving relationships.” 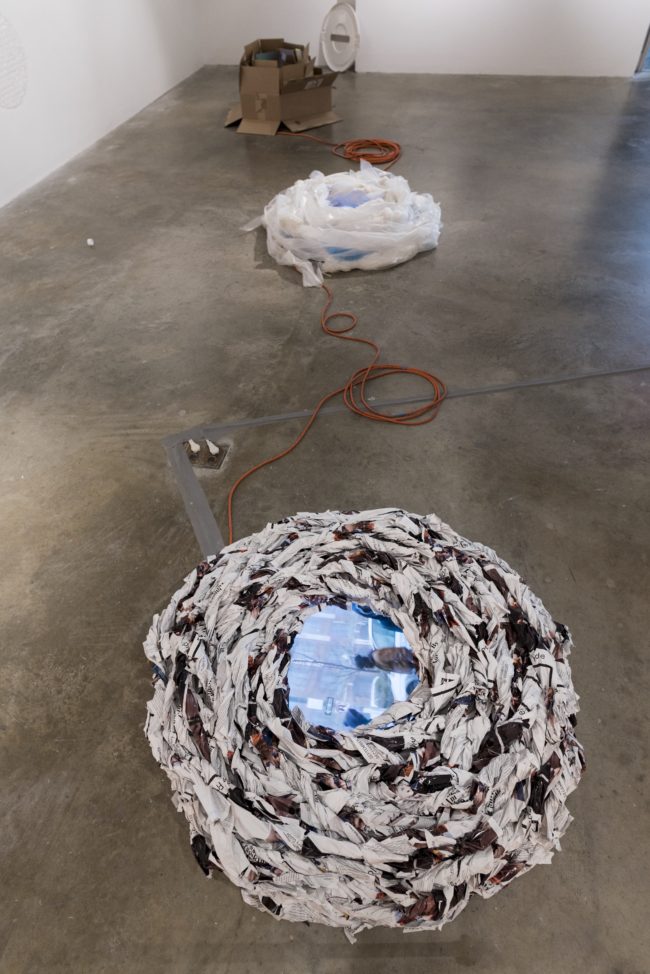 Installation view of Matriarch’s What Goes Around Comes Around

Virginia Overton’s Untitled (Juniperus Virginiana) covered an entire wall in wood paneling sourced from the artist’s family farm in Tennessee, which filled the entire gallery with the scent of cedar. The larger wall installation is mirrored in miniature form (a child, perhaps) in a framed panel of the same wood on an opposing wall. Overton has used this wood, eastern redcedar, in many smaller works as well as the original wall piece, which was installed at Mitchell-Innes & Nash gallery in New York. 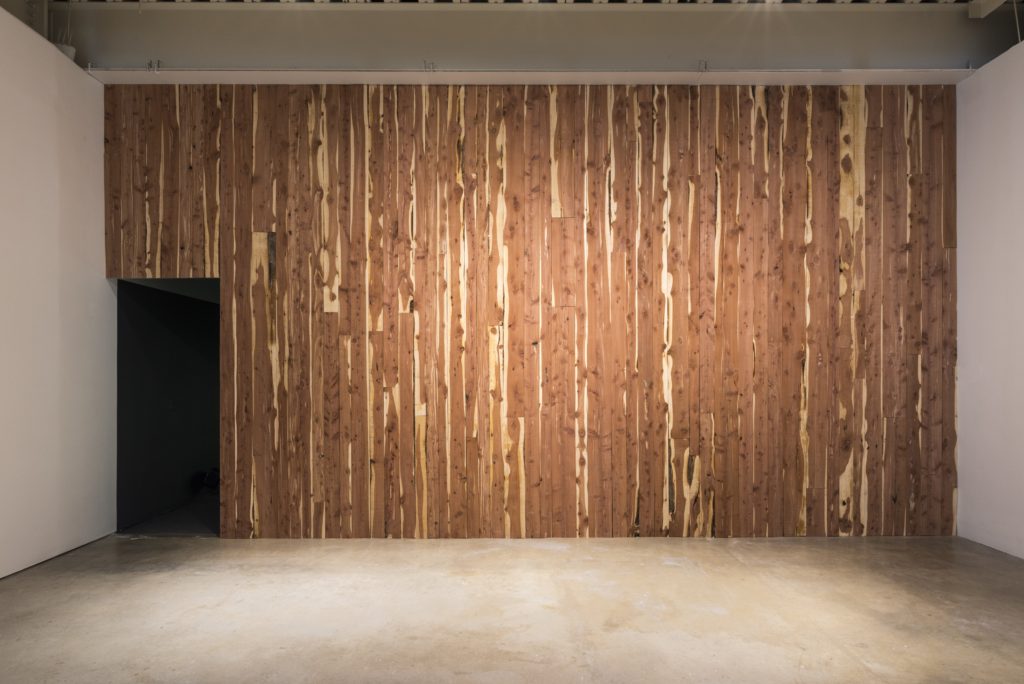 The works in the show acknowledge and pay respect to the influence of descent and familial alliances and how these relationships can be considered in juxtaposition with the material world. Cycles take precedence over hierarchies—a cycling carousel of vintage slides, mandalas of detritus, a reimagining of a family industry.

all photos by Constance Mensh, published on ICA website

Aaron and Sheila had moved south, so far south that they went past the south until their vista was the Atlantic, from atop the flat peninsula, jutting from the edge of America. Their fortunes were END_OF_DOCUMENT_TOKEN_TO_BE_REPLACED