What we surround ourselves with matters. Interior designers know that the flow of a space, its colors, textures, and materials can affect our feelings as we navigate an airport, bus or train terminal, our digestion in a restaurant or dining room, or our energy level and behavior in the workplace, a dance floor, or our bedrooms. Sometimes traits in design coalesce long enough and consistently enough for a definitive style to emerge. Industrial, Mid-Century Modern, Shaker, Moroccan, French Country, Shabby Chic, and many others all have their own hallmark approaches to materials, palettes, lines and symmetries.

Musical styles emerge in much the same manner, through the emergence of common practices. Approaches to musical timbre, texture, form, tempo, melody, harmony, meter and phrasing have always been the principal elements of musical style throughout history. Additionally, technology influences music making. The development of publishing in the mid-15th century, experiments in tuning systems that eventually led us to the equal-tempered system we use today, and the development of new instruments all have influenced composers for centuries. Some events become game changers. The rise of the piano approximately 300 years ago is a good example. Its dynamic capabilities alone were immediately recognized as superior. Composers abandoned the harpsichord and never really looked back. The 20th century has seen several game changers: recording technology at the beginning, amplification and then analog synthesis in the middle, and digitization near the end.

Digitization has gone hand-in-hand with democratization and dissemination. Massive libraries of professionally recorded music samples of any instrument imaginable, affordable software with a wealth of processing possibilities that would have filled an entire recording studio a few decades ago, and a plethora of both professional and home-made on-line how-to videos (many of admittedly questionable quality) have led to musical experimentation (and imitation) on a scale never seen before. It resulted in an explosion of musical genres and sub-genres, particularly in styles that rely on digital means for production.

New technologies often create new niches to occupy and new opportunities. One artistic career path that never would have existed without these revolutions is that of the DJ, a role which itself experienced an evolution over time, having crossed the divide from analog to digital, from vinyl through CDs and on to binary-coded data within a software program. One of the software go-to’s for DJs is Traktor, an offering from the German hardware/software company Native Instruments. Traktor can take musical audio files and perform tempo and tonality detection. It can layer on effects such as filtering, delays, and reverbs, or it can slice a sound file up based on its transients (basically its clearest, least-difficult-to-manipulate fragments) so that a DJ can re-order them, loop them, or otherwise get playful, using paired external interfaces or iOS devices designed so that DJs can still maintain a tactile relationship to what they’re creating.

And what are they creating exactly? Interior design is a good analogy for what many contemporary DJs do because they arrange found musical objects in personal ways, aiming to create an enticing flow of energies, textures, and moods. Kathryn Correy, or DJK8, the force behind WPRK’s Halcyon Radio show (91.5 FM in Orlando or WPRK.org for streaming) Saturdays from 7-9pm, is a specialist in Liquid Drum & Bass. This is an emotional, more reflective sub-genre of Drum & Bass which was originally a hard-hitting, fast tempo electronic style that emerged in England in the early 1990s and relied on syncopated drum grooves and focused attention on bass and sub-bass lines. Characteristic of both genre and sub-genre is the existence of tempo layers. The hi-hat and snare drum typically express a tempo of 150-180 beats per minute, while the rate of change in other parts happens at half or even one-quarter that speed. Think of a Rubin Vase, the image that is both a chalice and two faces in profile facing each other. You can hold one image in the foreground at a time, not both. Similarly, you can focus your perception at the faster or slower tempo. 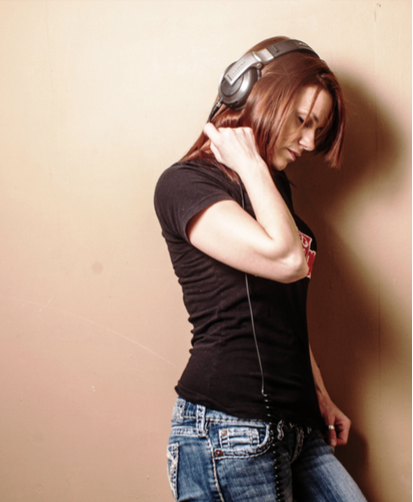 Correy compares her Halcyon Radio sets to journaling. She designs two hours of cathartic, emotional experience, often using the show to help process her own feelings that built up over the week, though she also embraces diversions to fulfill a listener request on the fly or to showcase something new. I shadow a Halcyon set and watch DJK8, with laptop, Traktor, and a digital hardware interface that resembles old-school turntables. Syncopated bass lines rumble under ethereal pads that evolve as the filters on them open and close like breathing. Breaks filled with glittering arpeggios and reverberant vocals with taunting phrases about empty love slam into tightly tuned snare drums. A nearly constant presence is the hi-hats, the mated pair of sizzling cymbals that press tightly into each other most of the time like lovers who can’t get away from each other if they tried. Aggression has a place too as the set nears the 90-minute mark, with smoother, sine-wave bass lines getting replaced with heavier, harsher sawtooths. Despite the relatively hypnotic, static rhythmic surface, the under-layers undergo nearly constant change. An avid supporter and vocal advocate for other DJs and producers she loves and admires, Correy intersperses her set with song ID’s, shout-outs and promos.

Correy is a mother too, and a full-time hairdresser, but music is never far from her thoughts. She devotes most of her free time to research, listening, podcasting, set preparation, and performing. With two DJ brothers and a singer/songwriter father, Correy increasingly felt the pull to perform, and by 2011 began entering the DJ scene in and around Orlando, hosting SceneOrlando Live and performing in venues like Spacebar or Sandwich Bar. In live settings, DJK8’s journaling approach gets tossed out the window, though her starting point always focuses on love: empty love, unconditional love, spiritual love, nostalgic love. Performing live, she prefers making on-the-fly choices based on the energy she gets from the dance floor, which for Correy is the most addicting aspect of what she does. It’s all about being completely and utterly present with and for the crowd, feeling the love and loving the energy.

Why don’t we begin the evening with one big collective scream?" Moments later, the Carleton Auditorium at the University of Florida erupted into a jarring choir of the cries of those feeling the END_OF_DOCUMENT_TOKEN_TO_BE_REPLACED