On a sunny afternoon, I had the pleasure of meeting a brilliant artist by the name of Matthew Cornell. Well known for his hyperrealistic landscape paintings, Cornell uses his art as a medium for self-exploration. Seeking to connect his origin story to a place, Cornell has explored the idea of home through his show, Pilgrimage. His current works were “born out of the idea of home.” Cornell was born into a military family, so he was raised as a nomad who grew up on the road. Throughout his childhood he was uprooted many times, and to this day, he still questions his sense of place. Having no real “sense of home”, his oil paintings of suburban scenes and landscapes lead him closer to his answer. Pilgrimage was recently displayed at the Arcadia Contemporary in New York City last spring.  The show was accumulation of many years of hard work, and his wrestling with the ideas of “home” and “hometown”. Cornell explained his show by simply stating, “How can I find home? Maybe I can find it right back where I started.” 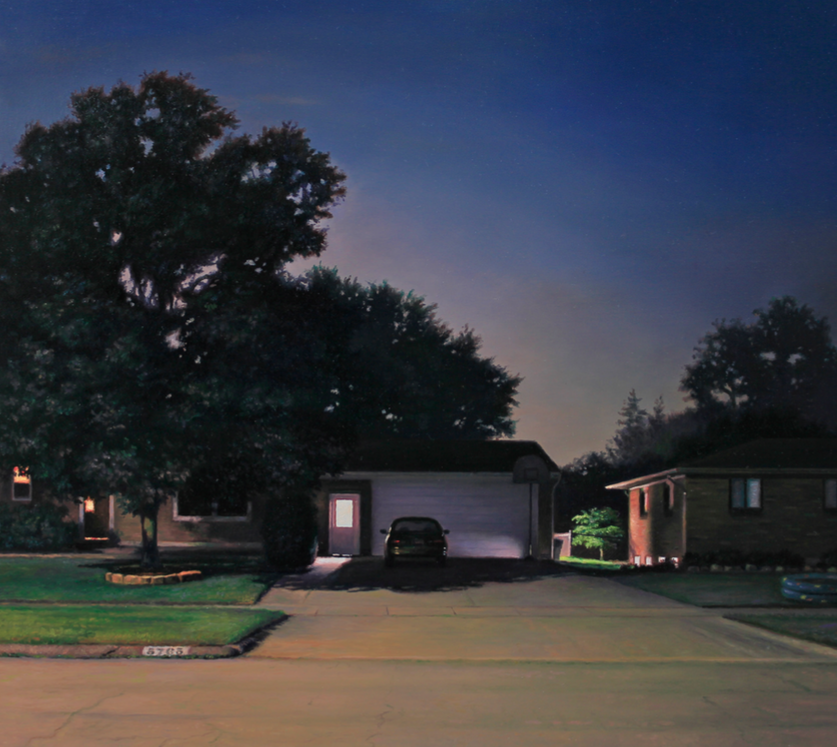 As someone who was born and raised in Orlando, I have had the pleasure of calling this city home for many years. When I sat with Cornell, it was hard for me to imagine not calling one place home. I then came to the conclusion that he and I could not be more different. I grew up in the same area for 18 years, and will always call O-Town my hometown. Fortunately, I had the opportunity to travel a lot as a kid but it was only ever for a couple of weeks at a time, so I never really got to live and engage in a new community. Even when I went to university in North Germany, I still felt like I wasn’t a part of that community. My school was an English-speaking institution that was situated in the heart of a suburban area, and due to the language barrier, it was very rare for students to interact with the surrounding neighborhood. So, although I can say I lived in a foreign country for three years, I did not engage with local community.

Drawing on my own personal encounters, I then questioned how much Cornell participated in his new surroundings when he moved from place to place. He revealed that his older sister attended 12 schools in the span of 12 years. Assuming you were uprooted as much as Cornell was, would you bother to understand and partake in your new environs? Although this particular subject was not brought up in the interview, I think I can say that Cornell took in his new settings quite well and has used them for creative inspiration later.

To prepare for his show Pilgrimage, Cornell traveled throughout the country, visiting his past lives. Every house he has ever lived in was painted for the show. Along the way, he discovered himself and the lives that have touched him most. He even painted the childhood homes of his parents and wife. Having lived in Kentucky, Kansas, Ohio, and several cities in California, Cornell covered a lot ground.

When I asked him how many states he had visited, he simply said, “all of them.” Not a small feat by any means, Cornell described his passion for the road, declaring, “I feel mostly at home on the road.” In love with its openness and ability to bring you anywhere, he likes “being somewhere where you are nowhere.”  While taking this self-discovery tour, Cornell told me that his wife and he never really had plans, and loved discovering new oddities. Small museums and novelty shops were exciting stops along the road, because they always found something interesting that held a story and a connection to a place. But what were Cornell’s stories that held connections to places for him?

I began my interview with asking the simple question, “What got you into painting?” figuring this would be a good start to Cornell’s story. He went on to explain that, like many other children, he was exposed to the wonders of art at a young age, though he admits he “had an interest in it beyond the average kid.” However, it wasn’t until he was 19 that he rekindled this passion. By accident, he had found some paints in his friend’s garage, and a spark was lit. From here, he moved away from a pursuing a degree in journalism to work towards a B.F.A. Taking art history and studio courses, he began his journey as a trained artist.

Soon, after earning his B.F.A from California State University Long Beach, he was dumped into the big city of Los Angeles. Having no real sense of his degree and its application to real life, he moved to Kentucky. Planting himself within a very conservative, suburban area, he began to paint portraits of children and families to make a living. However, after five years of doing so, he “didn’t want to be limited to just painting five year olds,” so he became involved in outdoor art festivals.

Cornell later admits that these events forced him to become a better painter. Teaching him to work with deadlines and pushing him to find clarity in his works, he found his focus. He soon found an interest in large landscape paintings.

Living in Kentucky and Kansas, he became fascinated by the tornadoes that ravaged the midwest. Originally working with large-scale storm paintings, he enjoyed the “quiet reaction” to these big pieces. However, if you have taken a look at his more recent pieces, the oversized canvases would surprise you. 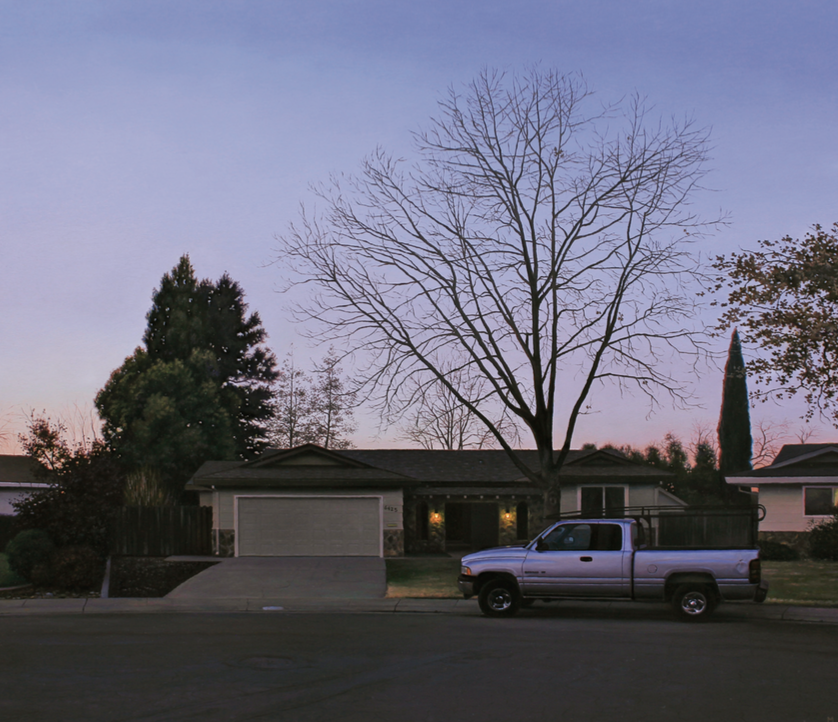 In Pilgrimage, most of his works’ sizes average around less than one square foot. He found that by painting small, detailed pieces, it forced the observer to look closer to the smaller picture. “I wanted to do something that was small and intimate,” says Cornell, “I wanted others to see something huge in a smaller piece.” He has noticed that this latest trend tends to gain more reaction than his large-scale pieces. However, Cornell likes the idea of exploring different ways of working and approaching things.

As he is predominately a studio painter, Cornell is more inclined to photograph his journey and take those special moments with him. However, he enjoys sketching on site, as it allows him to capture the color just right. For his finished products, he mainly works with oil paints, as he believes that these give him flexibility and create a “kind of depth in the paint that you don’t get with acrylic.” 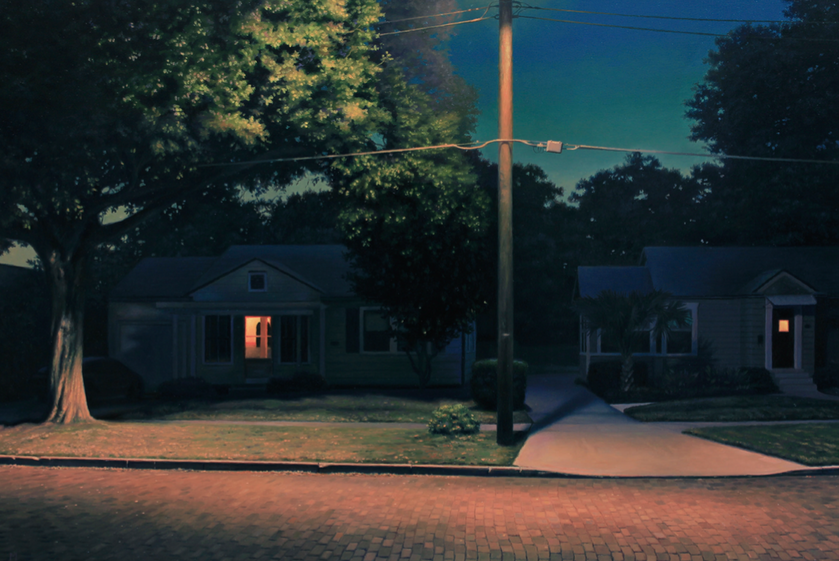 At first glance, most of his paintings look like photographs, but as you gaze closer, you can see the layers of paint used to create the texture of shingles on a house. You can clearly see that each home is treated with the utmost care. Cornell mentioned that he preferred working with smaller canvases because he was better able to see the details within his paintings.

From there, it didn’t take long for Cornell to explain his fascination with dawn and dusk. Describing his love affair with these times, he explains that they are moments “between things” that have the ability to “shroud things in a half light” and can make anything mysterious. He even joked that he could make a trashcan look ominous and “interesting” at this time of day. Ultimately, he loves dusk’s ability to take over the imagination. Most of his scenes are depicted at dusk, capturing an eerie essence of movement and life. Human activity is not directly seen, but rather implied. 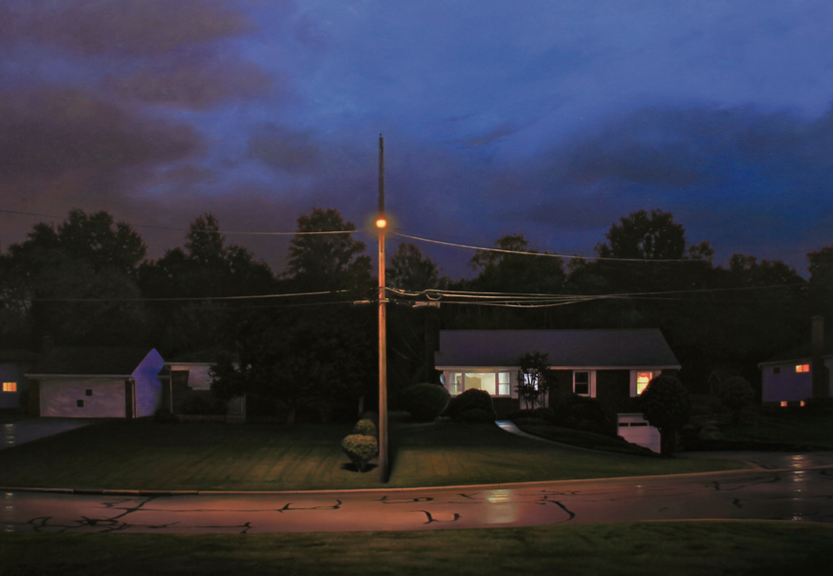 While touring his past houses and meeting the current residents, he recognized that they were creating stories on top of his own. When visiting a home in which he resided for only a few short months, he discovered that his marks made as a small child still remained. Wandering around the house, he found that he had carved his name upon the stairs. He was surprised it had not been painted over; he enjoyed seeing his childlike handwriting so many years later, bringing memories to the surface.

Cornell still continues to explore his own past through his paintings, but is now searching for new inspiration. He currently resides in Orlando, and admits that landing in Florida has lasted a lot longer than he ever expected. Captivated by the South and its stories, Cornell wants to begin exploring the rural history of the region. He is interested in the idea of painting the huge mansions and plantations of a time past, and understanding the transitional periods, from the wealthy to the desolate. Cornell wants to capture the heart of small towns and their times gone by, and the survival of a culture that still remains today,  questioning why people are sticking around in areas that have “clearly died.” “The South has a lot of interesting stories to it . . . [especially] how it has evolved in the last 150 years,” remarks Cornell. 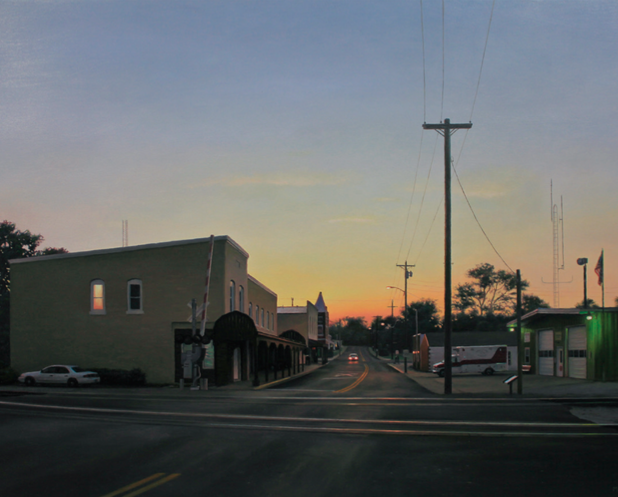 As the interview wound down, I asked Cornell my final question, “Who is your favorite classical artist?” at which point he responded with, “Vermeer.” Prior to the interview, I had gone into full research mood and explored all of Cornell’s works and history, but the minute I saw his suburban landscapes, I equated him to a modern-day Vermeer. With his light-infused paintings and his ability to capture every last drop of sunshine upon a canvas, I fell in love with his works. As a photographer, Vermeer is a personal inspiration beyond comparison, and Cornell’s hyperrealistic pieces are right up there, too. He has the talent to take a moment in time and a capture a piece of his heart, which is truly remarkable.

In his piece Sacred, he paints the childhood home of his wife, in which her father still resides. His capacity to capture the light within the home and the soft overcast of the driveway is amazing. He describes this piece as a representation of “what is good about this country and how well we can adapt and prosper and nourish friendship for, in this case, a very long time.” The home on the right belongs to a woman who has been a friend and neighbor of Cornell’s father-in-law for over 54 years. Both raised families in these homes, and have kindled a friendship that has spanned many decades. One is Jewish and the other is 7th Day Adventist. They have “differences and commonalities and can still see and understand the beauty and honor of their experience even as the arc of their lives reaches near its end.” What Cornell truly appreciates is the sense of home that has been created and describes it as a “hallowed ground . . .it is sacred.” 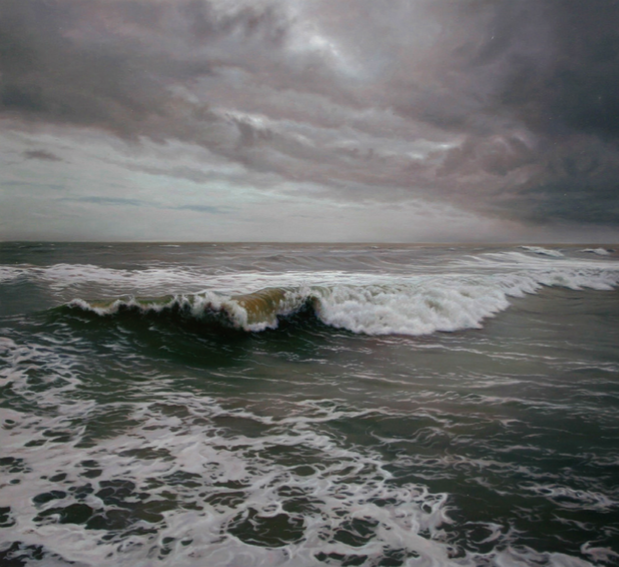 With each piece created, another piece of the puzzle is put into place in the jigsaw that is Cornell’s life. He understands that in order to comprehend oneself, one must also appreciate the surrounding lives of others. That’s why he continues to explore his past and those around him. Art is a means to understand the world around you, and Cornell uses it to understand himself. He still has a long road in front of him, but will continue to create in order to identify his own place. I, myself, use writing as a medium to explore the deeper crevices in my mind, but ultimately use it to understand others around me. By connecting yourself to one place, person, or thing, you can grasp the idea of “self” a little more easily.

Brill Adium is making faces. In his art, the face says it all. In himself, the name says it all: Brill-iant. I like to pick apart names and see how they relate to people. I often think about the words END_OF_DOCUMENT_TOKEN_TO_BE_REPLACED