“Artistic collaboration is a special and obvious case of the manipulation of the figure of the artist, for at the very least collaboration involves a deliberately chosen alteration of artistic identity from individual to composite subjectivity.” —Charles Green, Collaboration as Symptom

Artistic collaborations oppose the long-held myth of the artist-as-lone-genius—working in isolation from the world—and propose new authorial modes. Collaboration is a practice that acknowledges the interconnectivity of artistic production within communities, and gestures towards a “composite subjectivity.” Hannah Spector and Jacob Bailes developed a philosophy of collaborative production while working together on Moments, Moments, Momentum, their first show together at Orlando’s A Place Gallery in April of this year.

Hannah Spector’s formal explorations and Jacob Bailes’ minimalist sensibility coalesced in a show that explored utility, consumption, and the futility of our relationships with unnecessary objects. Perhaps a rumination on the philosophical flaw of selfish individuality so present in our Western consumer culture and capitalist ideologies, the artists chose to avoid attributing works to one or the other specifically in the show, further delving into a joint artistic identity and practice. Spector said about this decision, “We looked back and realized we had irrevocably shaped each piece of the other’s.” 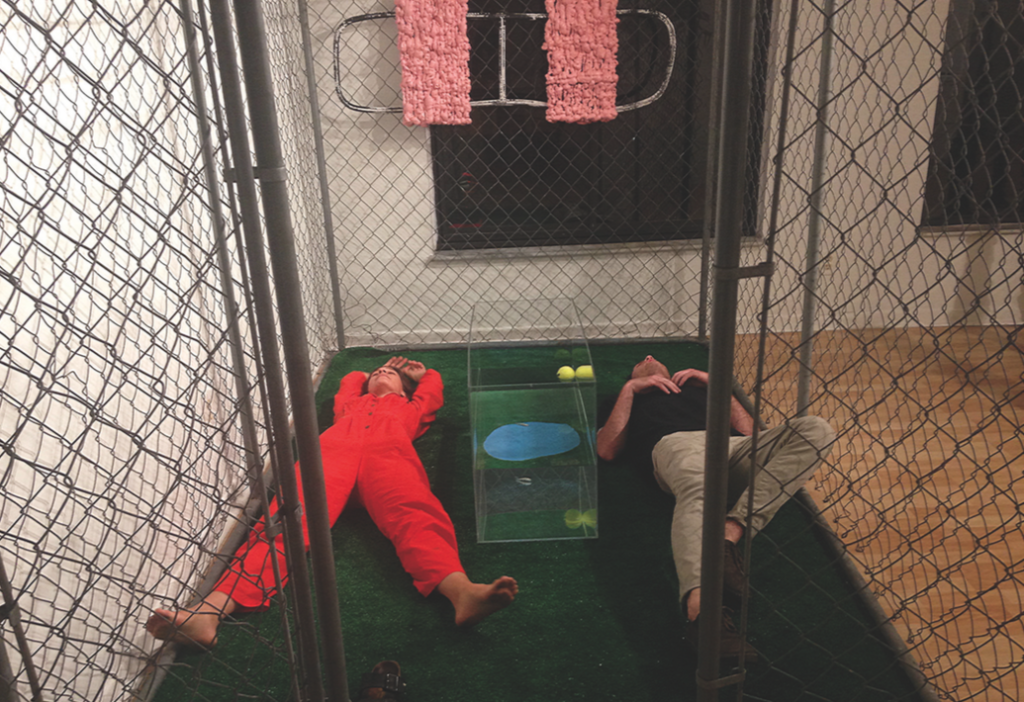 Irmgard Emmelhainz writes, in his discussion on decolonization as political action in the November 2016 issue of e-flux journal, “The source of the ideology of technological rationality can be found in the Western division between nature and culture,” implicating our Western, epistemological foundations of the self, and the Modernist assumption of separation of human and nonhuman agents, in our systemic destruction of the environment for the production and consumption of unnecessary goods. Emmelhainz’s essay is a call-to-action for a reassessment of these damaging ideologies—a decolonization of knowledge—as “our forms of knowing and seeing are complicit in the ongoing destruction of the planet.” The notion of collaboration as a temporary abandonment of a singular identity is, at the very least, a gesture towards this ideological reassessment.

Absurd sculptural juxtapositions of found objects and dead animals removed from nature, video works engaging with identity, and performance were all included in Moments, Moments, Momentum, each form further contributing to the show’s conceptual dialogue about life in the age of the Anthropocene (our current geological age during which human activity has been the dominant influence on climate and the environment). While dealing with such weighty concepts, the work managed to be both humorous and unsettling. One installation, inside the gallery, sitting on a rectangular patch of astroturf with chain link surrounding the perimeter, consisted of a dead minnow draped across a tennis ball floating in a rimless fish tank. This work seems to identify the absurdity of our self-imposed borders and distinctions, the constructed categories into which we sort the world, and, from the artists’ statement for the show, “the absurdity of our needs. collecting things. putting bags in bins and bins in boxes. there is no stopping point. the sickness of our grabbing hands. need. time.” 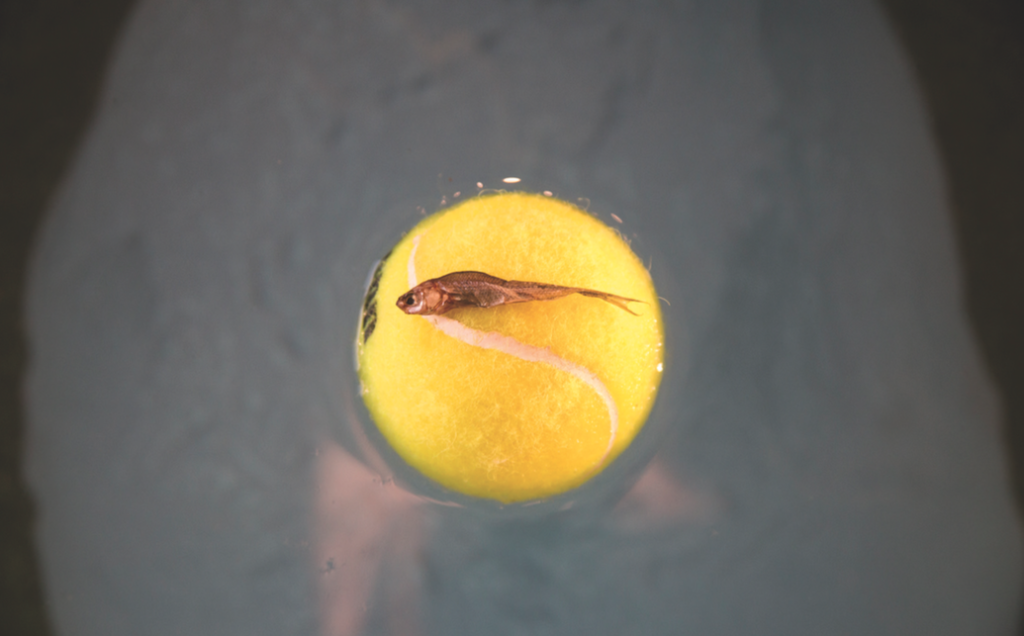 Spector and Bailes take very different approaches to making in their individual practices. While neither is confined to a dogmatic medium specificity, Spector’s oeuvre consists of primarily 2-D works: collage, painting, and photography, while Bailes is more sculpturally oriented. Spector’s approach to abstraction is reminiscent of formalism, while Bailes is indebted to the conceptual art movement. The two claim that their collaborative practice helps to balance one another out, finding a common ground between two vastly different modes of working. 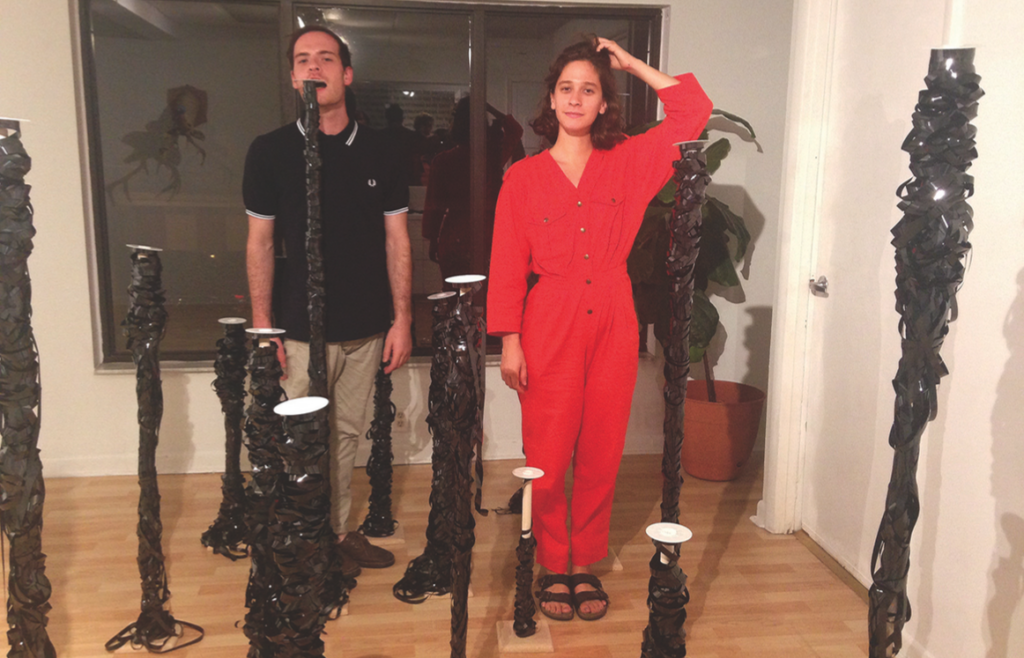 Artistic labor is often uncredited labor. Frequently, one artist’s project is indebted to the labor of countless studio assistants, preparators, art handlers, and technicians, whose names never make it into the wall text. These laborers are, much of the time, also artists, who have their own studio practices outside of their jobs within art institutions. What is the difference between an artist contracting a laborer and an artist collaborating with another artist on a project? What factors decide whether something is labor or art? When is authorship decided by hierarchy rather than creative production? 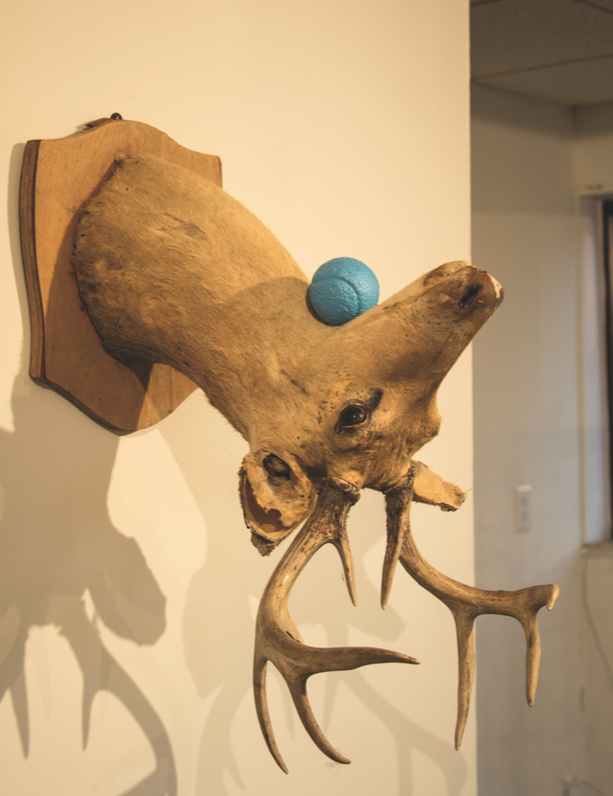 Spector and Bailes left the specific authorship of their work in Moments, Moments, Momentum ambiguous after considering these factors during the installation of the show—“We chose not to identify who created what for our show because of the amount of collaboration that transpired during install.” The ambiguity of the authorship of each component of the show allowed further consideration of the impact of the collaboration on each stage of the artists’ process, without favoring or fetishizing one particular part of the process—a subversion of instilled hierarchies, favoring ideas over fabrication and labor, that usually decide who gets credited for what.

In the wake of the election of Donald Trump as president of the United States, it is increasingly crucial to consider our relationships with the world, and how our actions impact the communities we belong to, as opposed to acting simply out of selfishness. Artists, as producers of culture, have the profound power of intentionally constructing identity and using perspective (both in the concrete and abstract sense) as a tool to stimulate consideration of others’ points of view. Collaborative practices and composite subjectivity move in that direction.

Back in February, I was organizing papers at Gary Bolding’s home studio when I came across a typewritten resumé of his as old as I am. The first page of the yellowed papers, still neatly clipped END_OF_DOCUMENT_TOKEN_TO_BE_REPLACED