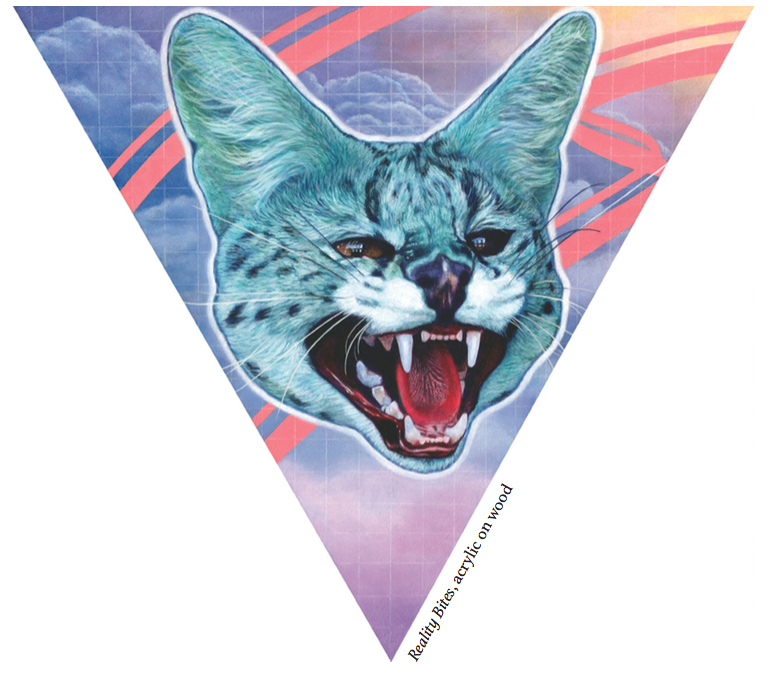 At the end of 2016, I sat down with Johannah O’Donnell to reflect on the year of the “dumpster fire” and how now, more than ever, it is important for us as artists to use our mediums to stand by our beliefs. “Where, as artists, do we go in this kind of situation? Do we go really dark, or do we try and do something more upbeat? What is our part in this?” O’Donnell told me that she was making art when George W. Bush was in the White House, but this President Elect feels different to her. She describes it as a step backwards. The once-progressive United States is at risk of undoing steps towards equal rights for anyone who is not an upper-class, white male. As artists, considering our voice within the context of our times is what makes art important within a more specific, political context.

O’Donnell has recently been displaying her frustrations through her work. “I did a lot of work this year with bared teeth and angry animals,” she explains. In December, she had work at Redefine Gallery’s booth at X Contemporary, during Art Basel Miami Beach, which she titled Reality Bites. Another recent piece that she has made is the triptych Elegy to the Soviet Union. These three works are painted on wood and elaborately framed to mimic the strong, architectural style of Soviet Russia. The title came from the abstract expressionist series called Elegy to the Spanish Republic. O’Donnell’s elegy, or funeral song, was intended to be a jab at Russia, but instead, it might have backfired on her. As a country, we are in a limbo of sorts. Our international relations will more likely than not dramatically change, and the relationship between the President Elect and Russia’s President Putin may become a dangerous one. Each of the three paintings feature two wolf heads joined at the neck over classic Soviet Union architectural forms. “I always enjoyed those monuments because they’re abandoned, and I thought it was a really interesting metaphor for that country. I wanted to add an environmental discussion about post-Soviet Union Russia.” Gray wolves are specifically used because, after the explosion at the nuclear power plant in Chernobyl, the vast lingering amounts of radiation and lack of human occupation caused the local animal communities to thrive—especially the wolves. Not only is the gray wolf community large, but also the wolves themselves grow to abnormally large sizes due to the radiation. O’Donnell says, “not to oversimplify it”, but the two faces of the wolves are meant to represent the friend versus foe mentality. Time will be the only indicator of Russia’s true face towards America. 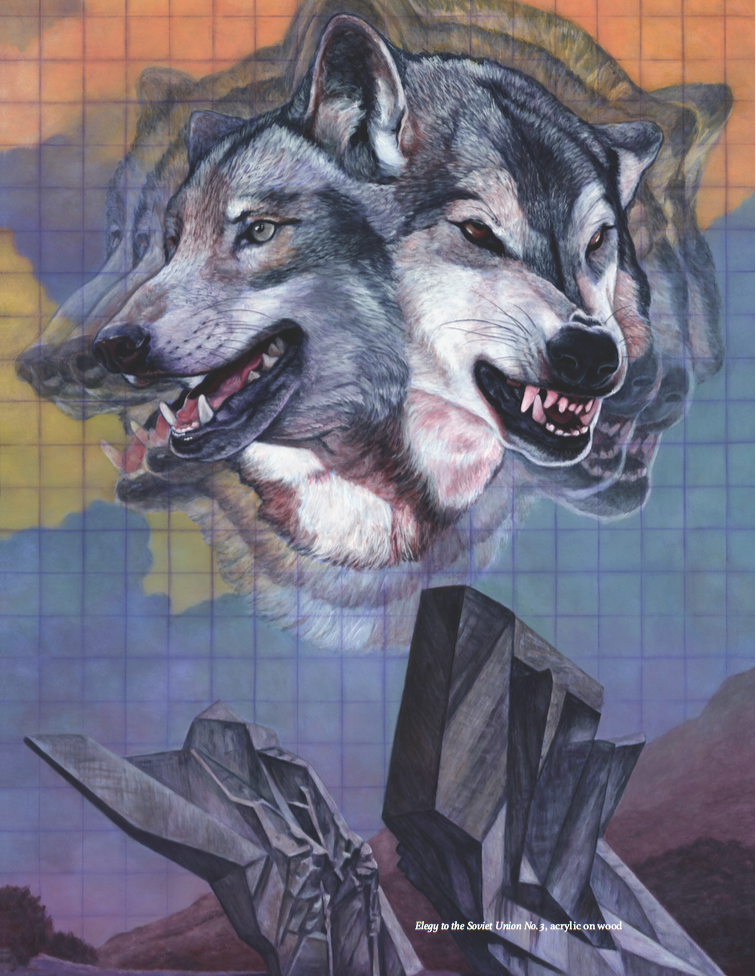 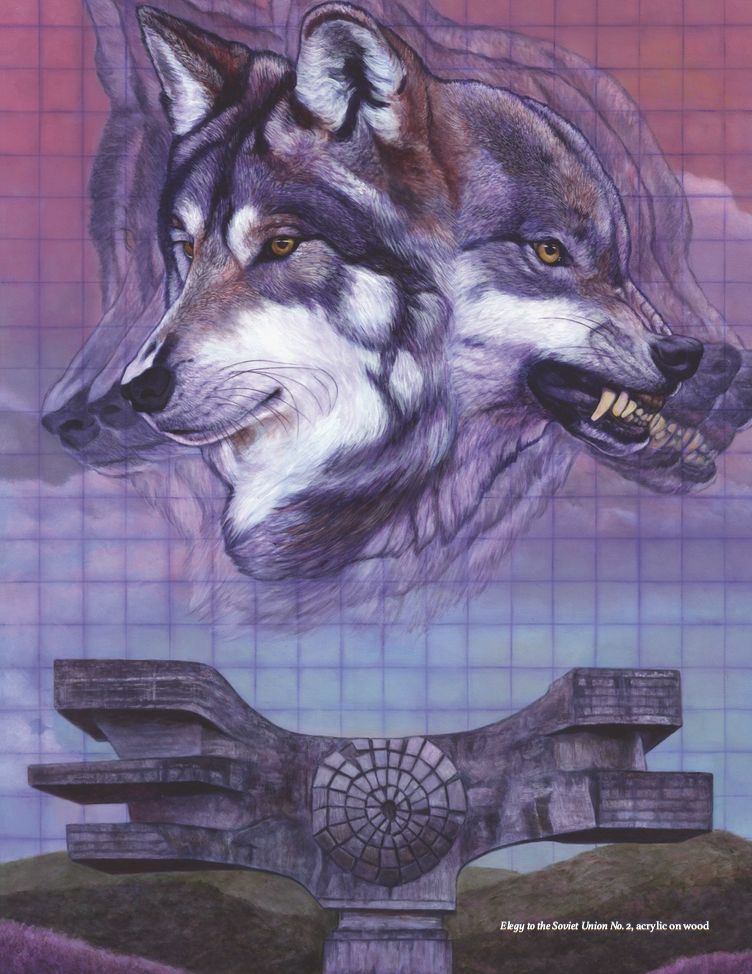 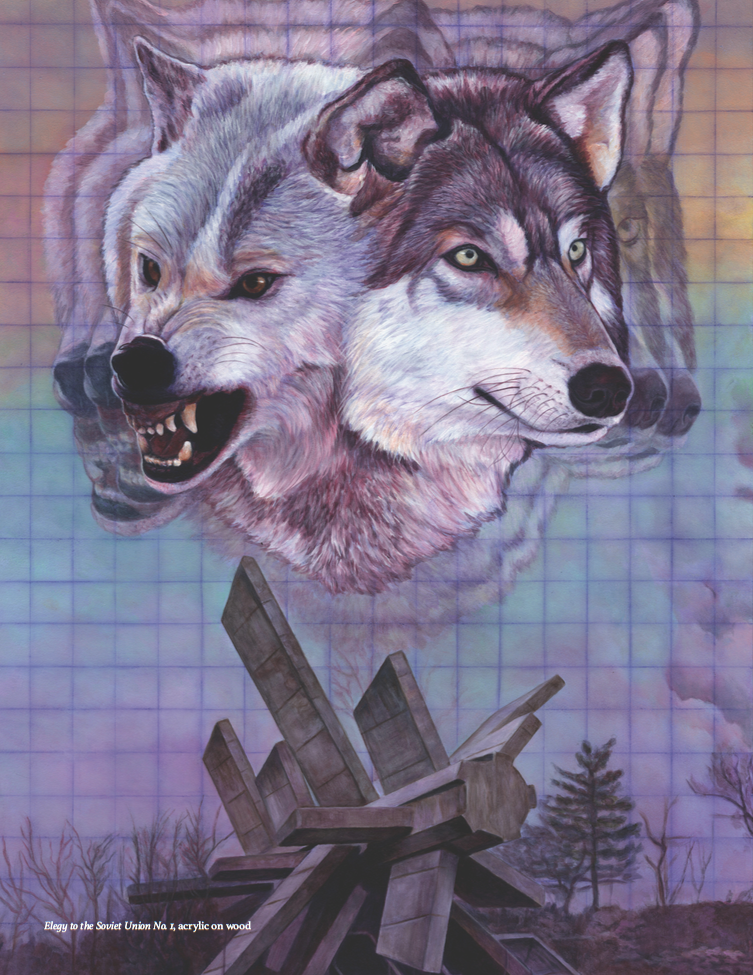 Often in O’Donnell’s work, you can find wild animals related to dogs or house cats. In her series of paintings of famous celebrities who have passed away, she balances these works by adding an endangered animal from the feline or canine families. Shapes that cover the subject’s eyes tie all the pieces together. David Bowie’s death changed the way we, as a whole, experienced grief. And then, just a few months after his death, another revolutionary musician and progressive icon, Prince, died. With the events that happened locally in Orlando, and all over the world in 2016, grief became a community experience. “With the grief that we have about celebrities and their death, it is not just about the individual dying—I think that there is more grief about what is happening to the world in general.” These celebrities’ deaths changed the way the world experienced sadness. Pairing them with endangered animals creates a subtle yet powerful message. “We might not be crying over this little frog that went extinct, but we know that things aren’t right,” O’Donnell explains. A whole community of animals dying off often happens so gradually and quietly that most people don’t even notice until it is too late. Through her display of these animals with iconic figures, she creates awareness for these creatures. The viewer is left to determine the meaning of the juxtaposition of these two images. 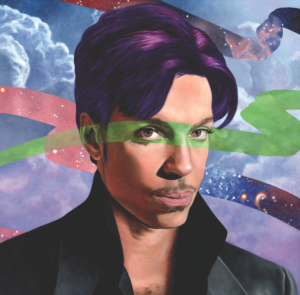 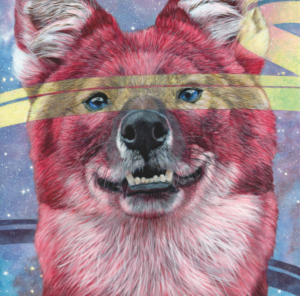 I noticed that, throughout her paintings, O’Donnell’s style seems to be evolving. Early on in her artistic career, people warned her about changing her painting style, but she simply responded by saying, “I need to be able to enjoy this.” Being stuck in a stylistic rut is the fastest way to become bored with painting. The primary people artists create work for are themselves, so staying with a specific style because it’s what other people expect of her is not an option for O’Donnell. “I think that my work is recognizable as mine. I do a certain amount of one thing and then mix it up. I like to change up my style and I don’t want to keep doing the same thing over and over again.” Her work stays true to the pop-surrealist aesthetic. Pop culture references—mostly from the ’80s—bright colored hair, and her specific choice in colors encompass the pop-surrealist movement. 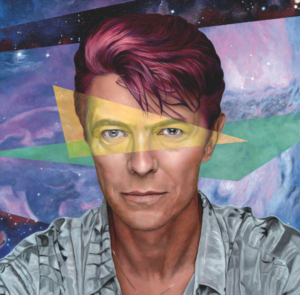 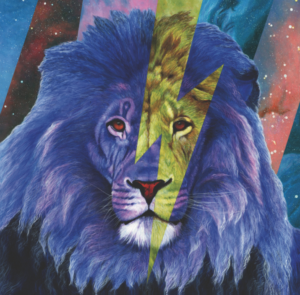 “As an artist within the pop-surrealist movement, my biggest success is in these themed shows—if you want to get your work out there, it has to be through these shows. I find that there are certain themes I really enjoy more than others. I want to balance out the themed stuff with more content-driven work.” Looking at O’Donnell’s resume, she has representation in multiple galleries and is constantly showing work across the country. She freely gives away the secrets to her success. 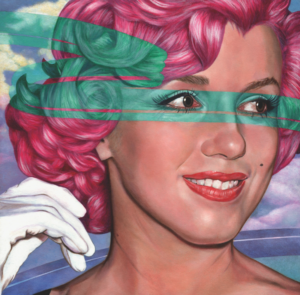 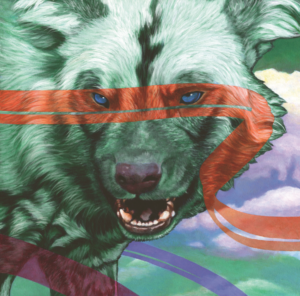 O’Donnell’s advice: Do art shows. Do as many shows as you can. Find calls-to-artists for every show that you can, outside of where you live. If it’s at a frame shop or a co-op, just do the show. Your resume will be awesome and people are going to look at that and see that you’re out there hustling. People are not going to care that your shows aren’t at a big-time gallery, they’re just going to see that you’re out there. If you’re unhappy with the scene in your town, but you live in that town, make it better. Create your own scene. Find a space and put on a show. Make the thing that you want to see in your town. Curate a show that gets you involved with other artists, and then you can kind of understand where galleries are coming from. Do this and you will have power and won’t feel helpless. 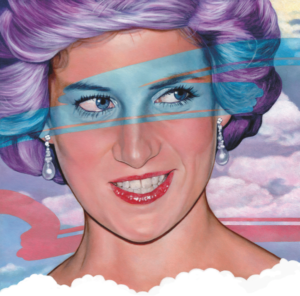 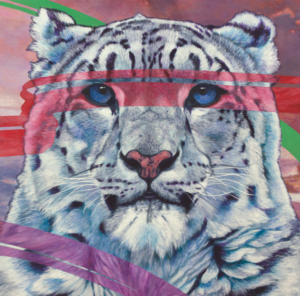 With the power of the Internet at our fingertips, there is no reason to sit at home and wait for a gallery to come to you. People will not know who you are as an artist unless you put yourself out there. Exposure is an artist’s best friend. O’Donnell admits that she struggles in the marketing department, but she more than makes up for it with the volume of shows her art is in. Having your name out there will undoubtedly bring people to you. (I actually followed O’Donnell on Instagram long before we sat down for this conversation.)

“The internet has made being an artist so much easier,” she told me. “You don’t have to live in New York or LA anymore. Where would I be if I weren’t in Florida? I’m a native and I like it here.” At one point in the night, she did wonder about the outcome if she had went to RISD instead of Ringling for her graduate education, but that thought was shaken off. The only thing O’Donnell laments about college is that they do not teach marketing classes for artists. “Fine art schools should teach a whole semester of marketing. I am sad to hear that they don’t.”

In college, O’Donnell was a printmaker and sculptor. For both her prints and sculptures, everything was process-based. Dealing with multiples taught her how to fine-tune her artistic process. Now, she has taught herself to paint with Golden Open acrylic paints (who should sponsor her, given the praises she sings about their product). Golden Open acrylics live in the realm between oil and acrylic paint. They do not dry out fast like traditional acrylics do, but they are less toxic than traditional oil paint. After being a scenic painter for 15 years, O’Donnell has been exposed to harsh chemicals and toxins, so acrylics are ideal for her, but she has been flirting with the idea of switching over to oils at some point. Because she plans out her paintings in Photoshop before she begins the painting process, her paintings are flawless and precise. “I started off saying, I don’t want to show any of my process,” she reveals. “Now, I am starting to show a little bit of process because it doesn’t matter. Showing the process is more for artists, because as an artist, I enjoying seeing other people’s processes. People become more invested and they see it as a story instead of just the end result.” 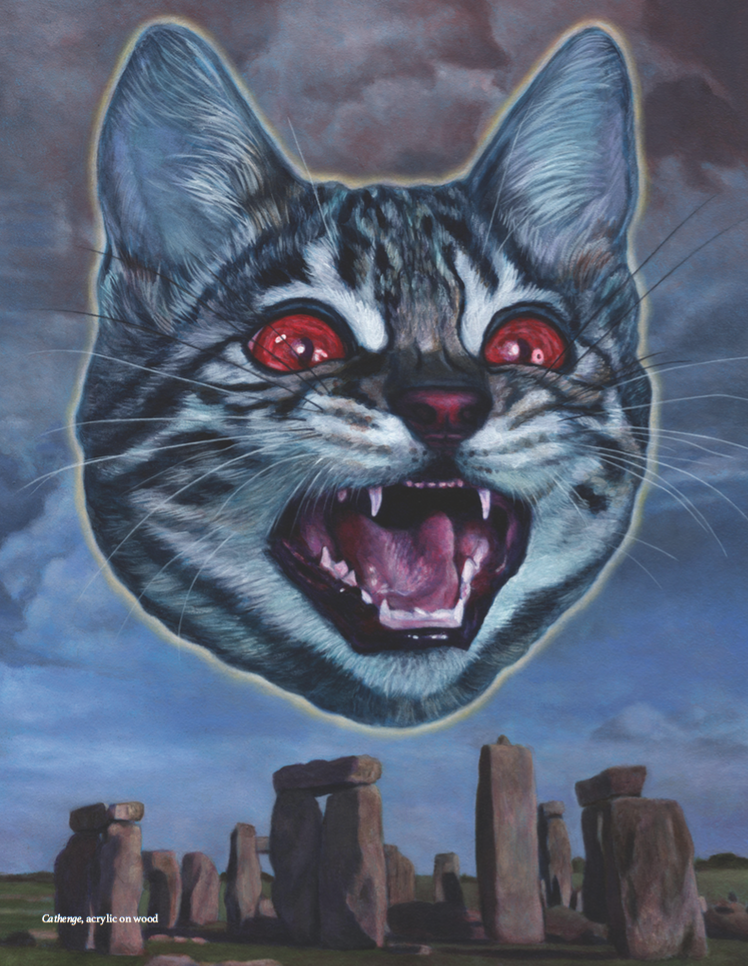 Johannah O’Donnell’s work can be seen at johannahodonnell.com
Follow her on Instagram @johannah_odonnell
You can see her work displayed locally at Redefine Gallery’s Pen and Ink show, open until January 14.

I left Orlando for school in Philadelphia a week after the tragedy at Pulse. My friends were still grieving, lines of people waiting to donate blood still stretched across many blocks in 100-degree END_OF_DOCUMENT_TOKEN_TO_BE_REPLACED