Some people associate skulls with death, but Nicholas Boyd, who paints under the pseudonym Loaf, sees them as a symbol of life as well. Wary of becoming a skull painter, Boyd tries to expand the subjects of his work but admits he is fascinated with anatomy and that skulls continue to make their way into his paintings. The human skull is a universal symbol, which is one of the reasons that Boyd’s paintings are so successful. When viewing his work, whether you see them as signifying life or death, it is clear that he is starting a conversation. 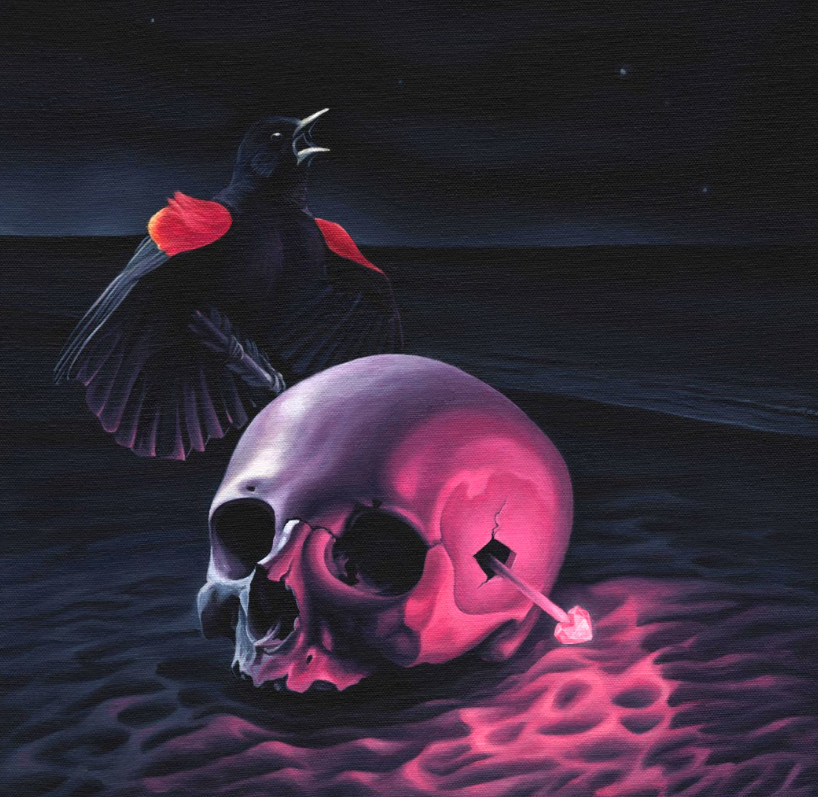 The East Coast is Evil, acrylic on canvas

Boyd’s goal as an artist is to create these conversations about the relevant topic of life and death. He keeps his art vague enough so it is up the viewer to formulate their unique conclusion. “I see illustrations, and they’re intricate and full of detail, but you immediately know what’s happening. To me, when you get rid of that mystery, the work becomes boring,” Boyd explains. “I’d rather the viewer wonder what I am trying to say. Even if they get it wrong, they are still processing and trying to figure it out.” By creating these open-ended topics of discussion, Boyd is inviting his audience to be actively participating in the experience of viewing art. 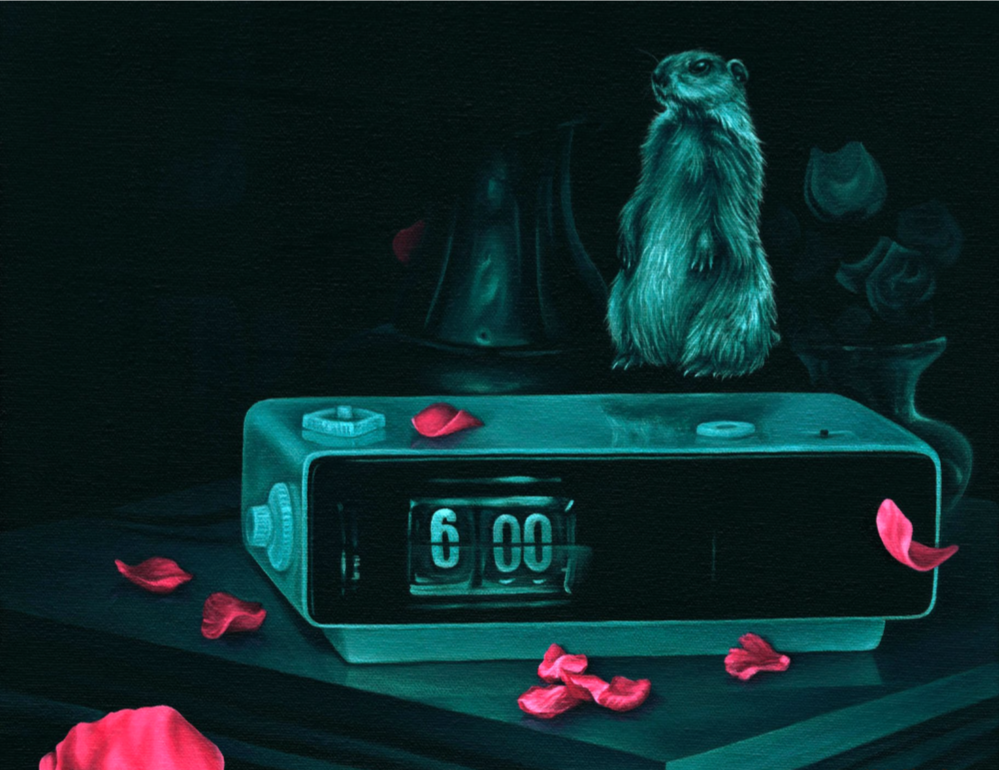   I Got You Babe, acrylic on canvas

By using universal symbols and eye-catching color palettes, Nicholas Boyd’s paintings are easy to approach, yet complicated to dissect. The accessibility of his art draws a unique community of artists and art enthusiasts alike. Creating this strong sense of community is important to Boyd. Without a supportive community, his transition from a traditional blue-collar worker into his career as a fine artist would have been much more difficult, and might not have occurred at all. As a child, Boyd would practice drawing using animals from magazine pages as references. While in school, he enjoyed creating art, but once he moved into high school, he lost touch with his artistic side. “I was never told not to be an artist, but it was also never encouraged.” By an act of serendipity, while searching the internet, Boyd came across the work of artist Jeff Soto. Soto is a contemporary painter and muralist whose style has been said to bridge the gap between street art and pop surrealism. When Boyd saw Soto’s art, it was the first time he was exposed to work of that caliber. “I am constantly looking at his work,” he says, “I was not looking for inspiration at the time, and I know it was out there, but he came across my radar and I just fell in love. I started sketching again.” It was not until 2006 that Boyd decided to pursue art. He began to sketch so frequently that his friends noticed and encouraged him to go to Full Sail University to study design. 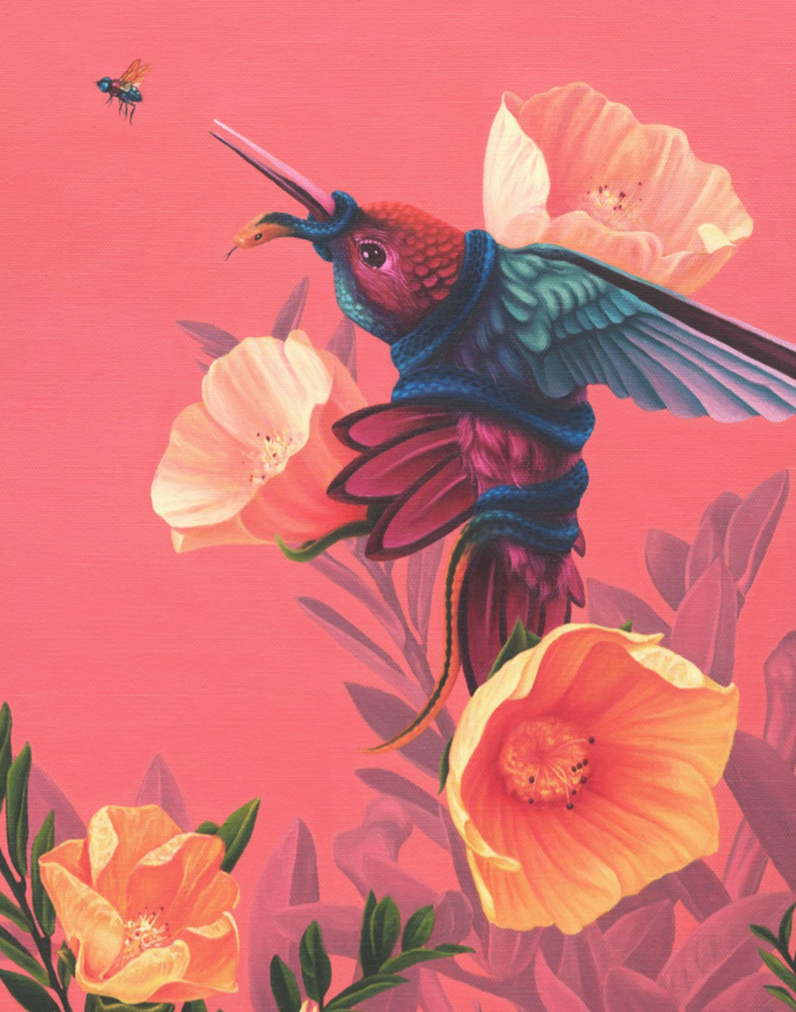 “I wanted to be a designer because I did not have the confidence to become a fine artist,” Boyd admits, “but as soon as I took my first art class, I met Steve Parker.” Parker, who now is the owner and co-curator of Redefine Art Gallery, connected with Boyd and they soon became friends. Using supplies that he gathered for his class, Boyd and Parker would meet up outside of school and paint together. This unleashed Boyd’s love of painting and he began to paint every day. He continued his education at Full Sail University and received a Bachelor’s degree in Art and Design, but stuck with paintings instead of becoming a furniture designer like he originally intended. Since he graduated, Boyd has returned to Full Sail and teaches computer animation. “I get to feel creative and sketch in my downtime.” Boyd adds that having a steady job that allows him to be creative and allows time for him to work on personal projects is a nice bonus. 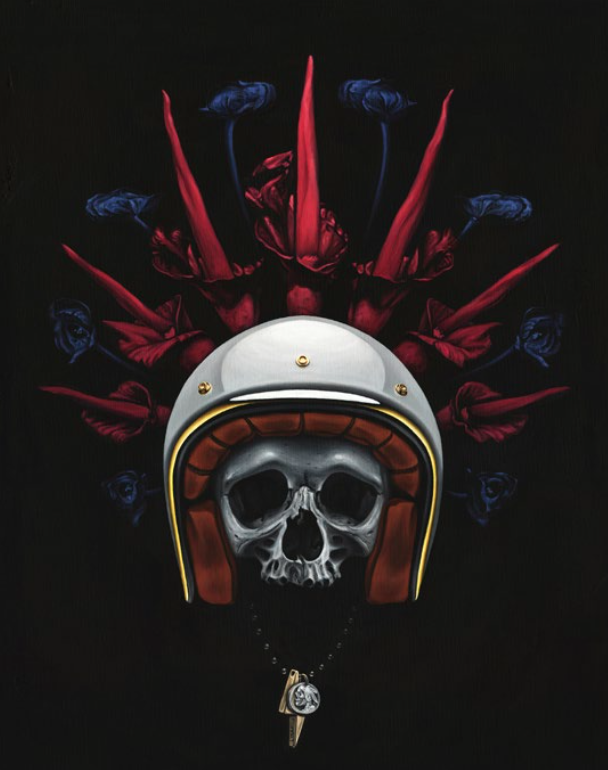 Sketching is an important part of the artistic process for Boyd. Having a very visual mind and a perfectionist personality, he plans out every detail of the painting before the brush hits the canvas. He uses a combination of sketching and photo references to plan out the composition visually. Then he uses Photoshop to plan out the images’ color and lighting. One of the most unique elements of Boyd’s paintings is his strong use of lighting. “I try to find a reference with the correct lighting, but that usually doesn’t happen.” For his painting Madagascar, which was displayed recently at the Gallery at Avalon Island, Boyd admitted to struggling with the light source. Adding an illuminated halo behind the subject of the painting added a challenging lighting element. By continuing to push himself as a painter, he not only betters his craft but also continues to love what he does. 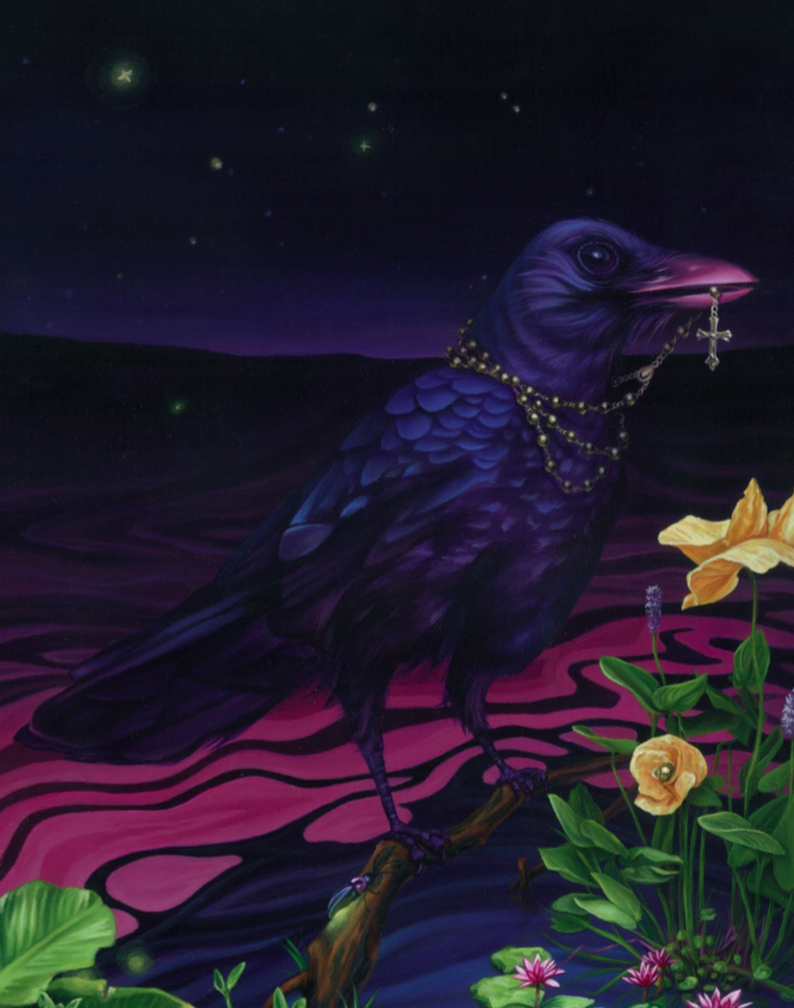 Early on, when Boyd was establishing a name for himself, he would participate in themed group shows. While starting out, he was able to show his paintings across the country, but he has since moved on to creating work that inspires him. When Parker began to curate at Redlight Redlight, Boyd would help him set up the shows, which often had themes. “When I discovered my style, I started painting what I wanted to paint. Artists a lot of times focus on theme shows, but it takes you out of your element and you have to focus on what they want.” Currently, Boyd has been creating a body of work in anticipation for holding a solo show. 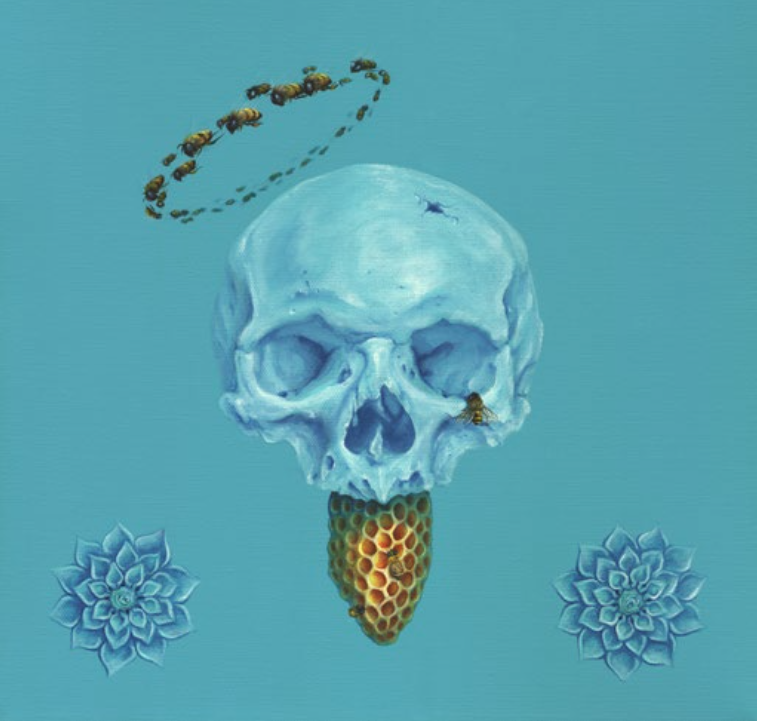 Too Bee Dead, acrylic on canvas 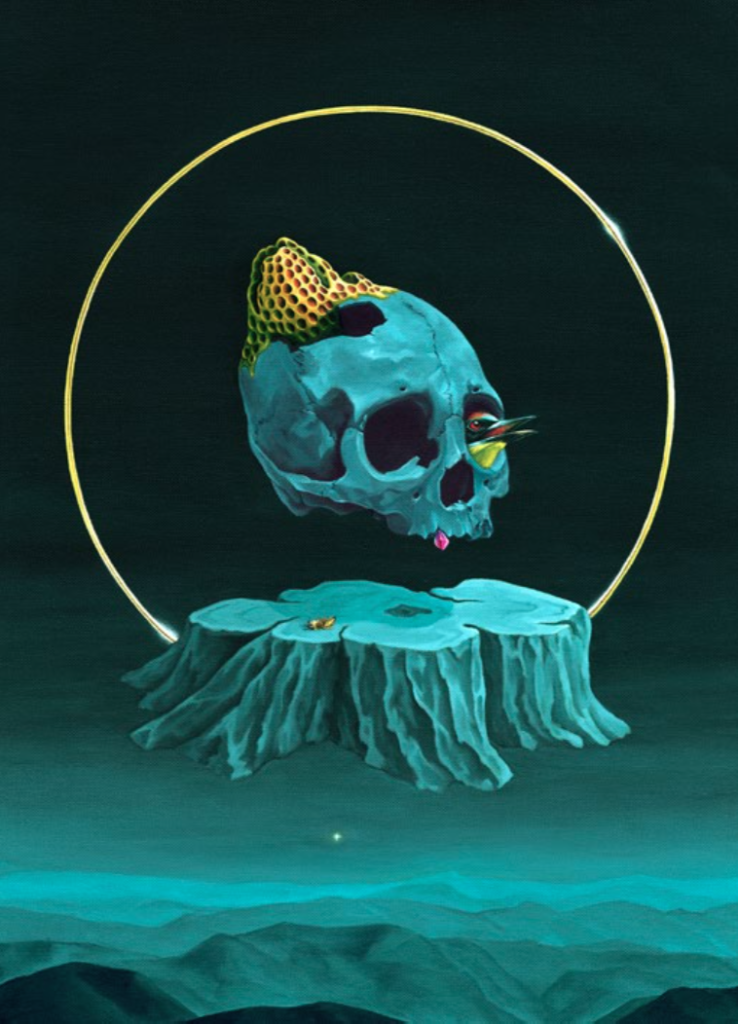 In his earlier series, To Bee Dead, the artist explores his childhood fascination with bees by incorporating them and honeycombs into each painting in the series. It wasn’t until after he started the series that Boyd himself realized the narrative he was creating. Already thinking about life and death with the use of skulls in the paintings, his addition of the endangered bees made the work reminiscent of an Albert Einstein quote:

“If the bee disappeared off the surface of the globe then man would only have four years of life left. No more bees, no more pollination, no more plants, no more animals, no more man.”

The importance of bees has been a hot topic of discussion with the recent decline in the bee population. Many have claimed that, like Einstein said, without bees to pollinate our crops, we will not be able to grow a sufficient amount of food. Multiple factors have led to the deterioration in the bee population, including pesticides, habitat destruction, and colony collapse disorder—the phenomenon where the worker bees leave the hive and the queen bee is left to fend for herself. Bees exist in a large community, working together to create a successful hive. Once the worker bees leave, the hive can no longer exist. There are similarities between the art community and the colony of bees and their hives. The artists, like the queen bee, cannot properly function without the community.

In his most recent series, Pollinators, Nicholas Boyd expands his investigation beyond just bees. Wasps, snakes, bats, and birds all make appearances in these latest works. After about a month of mentally creating the concept for a painting, Boyd went into research mode, not only to find visual references for his paintings, but to also ensure that he was creating work that is factually correct. In order to create his successful paintings, he spends hours researching the topic of pollination and each animal that he paints. What the animals eat, where they live, which plants they pollinate, and how they interact with other animals are all questions he asks before he considers the color palette and composition. Boyd then completes one final step before he begins to paint. Because he works with a broad range of color, he takes time to pre-mix every hue used. “I’ll make the middle hue first. Then I shift everything to white and shift everything to Payne’s grey or dark black. To me, it just makes sense” he says of this process. By using open acrylics and a retarding agent, he is able to keep his acrylic paint wet during the process. “Before retarding agents came to be, no one was able to paint this way. It is fortunate that we live in this time.” Some of the painters that Boyd looks to for inspiration did not have this luxury of material versatility. 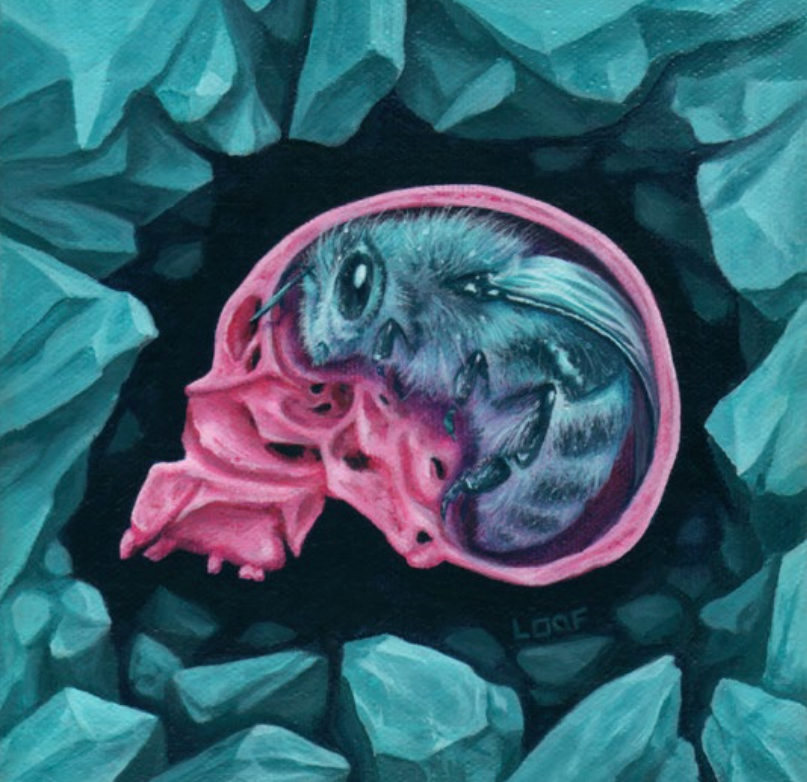 Rembrandt and Caravaggio are two classic painters that Boyd references in his work. His painting To Bee Dead V draws direct inspiration from Rembrandt. “Rembrandt would put his figures in a large black hat and it would create a shadow and contrast. I was playing around with that idea. I would love to go and focus more on Rembrandt and Caravaggio, I just do not have the luxury to study their art in person.” Boyd admits. Because of online resources, we now have access to more art than ever before, and without looking at work through the internet, he may not have been inspired to create art again. Still, he also recognizes the importance of viewing art in person. 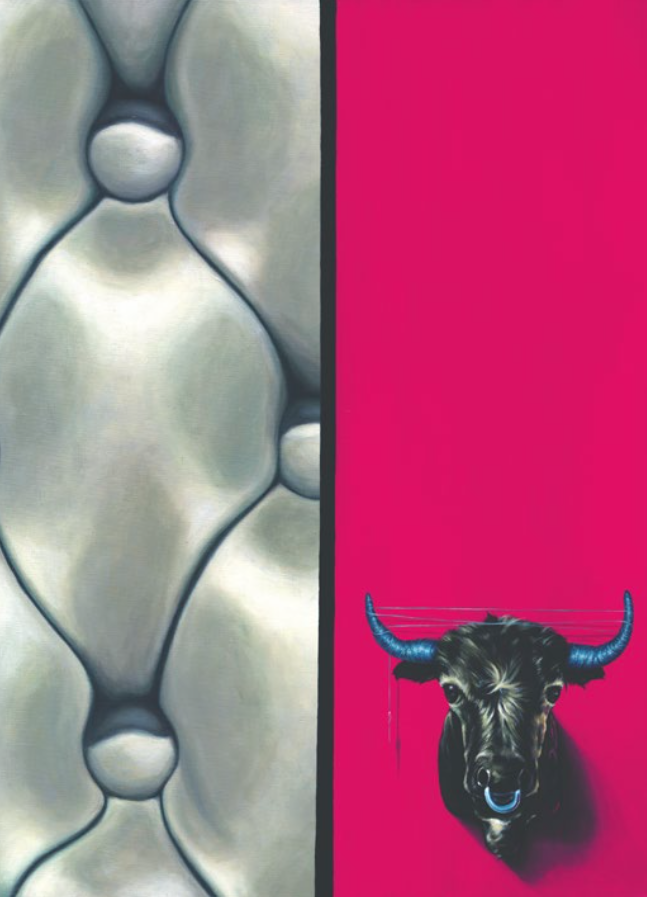 Locally, Boyd has shown his work at multiple locations including Redefine Art Gallery, The Gallery at Avalon Island, City Arts Factory, and The Falcon. His paintings span a large range in sizes, from 12”x16” to 30”x60”. Being able to see the fine details of his art in person helps the viewer gain an appreciation for his skill and talent. For his upcoming solo show, Boyd will be working on a range of canvases up to 6’x8’. “I want the paintings to make you feel like you are within the environment.” Continuing his Pollinators series at such a large scale will not only invite the viewer into the world of the painting, but also create a conversation piece that is unavoidable. The symbiotic relationships that are depicted in his paintings truly come to life through viewer interaction. Whether you agree with Nicholas Boyd’s perspectives or not, you will walk away from his work thinking about man’s complex relationship with nature.

You can see more at: LoafNinja.com

Jennifer Kaczmarek photographs intimate moments of children and adults struggling with severe health issues in her series Weed: The Story of Charlotte’s Tangled Web. This documentary series focuses on END_OF_DOCUMENT_TOKEN_TO_BE_REPLACED