At the end of 2015, upon check-in at one of my favorite NYC haunts, The Ludlow Hotel, I spied a pair of Keith Haring works flanking the lobby fireplace. There were several people drinking cocktails, conversing, and reading throughout the warm, intimate space, and I noted the nonchalance with which art and life seamlessly coexisted in that moment. These weren’t pieces behind boundary lines in a museum, where the unspoken etiquette of art spaces must be respected. No visitor was squarely facing these works, hands reverentially clasped or at one’s side, and no uniformed individuals were lingering nearby to shush a passionate conversation or prohibit photography. People were simply living in conjunction with the art, and there was something quite significant about it. 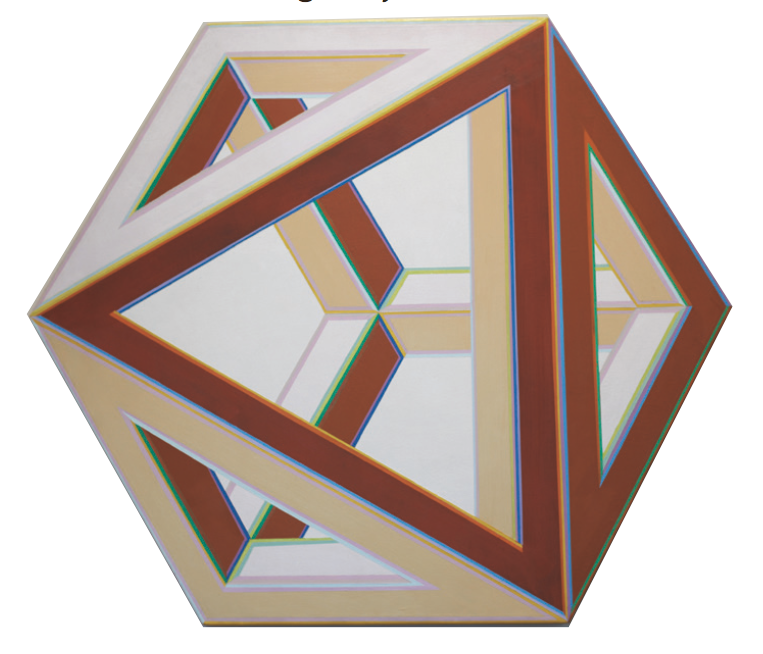 I don’t believe art is meant to be a nearly unattainable commodity, strictly delegated to museums, gallery spaces, and expensive penthouses. I also don’t believe that placing art in a multifunctional space like a hotel relegates it to a place of diminished importance. If anything, incorporating fine art into a place that functions as something other than solely a space for it to exist, has the potential to do greater justice to the works in question. Art can be impactful while remaining somewhat passive; we needn’t gaze at it ad infinitum as we search for every morsel of meaning. The overexertion in the analysis and search for elucidation of art can grossly mar the experience intended by the artist. While I believe that some of the best works of art tend to have profound and multifaceted meanings which deserve one’s full attention and thoughtful analysis, expounding on works for too long can often set us on a path where we’re much further from decoding the message rooted within them. The greatest eureka moments in any realm are oftentimes serendipitous.

It was by this kind of fortuity that I found myself at The Alfond Inn one Sunday afternoon for a tour with curator Dr. Amy Galpin. Selections from The Alfond Collection of Contemporary Art, all of the works featured at the hotel are accessioned objects that are a part of the Cornell Fine Arts Museum’s collection. The collection is the generous contribution of Rollins College Class of 1968 graduates, Barbara and Ted Alfond. The Alfonds have acquired a multidisciplinary group of over 240 works by both established and emerging contemporary artists from across the globe. These paintings, sculptures, photographs, and mixed media works represent a wide array of landmarks across the map of high-caliber contemporary art. Complementing this figurative diversity is the literal positioning of the art throughout the space: above the reception area, tucked in an alcove by the restrooms, throughout the lobby, down labyrinthine hallways, in conference rooms, and the library lounge. In addition to this wide array pervading the space horizontally, throughout the ground floor, moving vertically to the remaining four floors further reveals selected works. Seemingly unable to be situated anywhere without artwork in one’s line of vision, The Alfond Inn’s website aptly touts this collection as “an integrated art experience.” 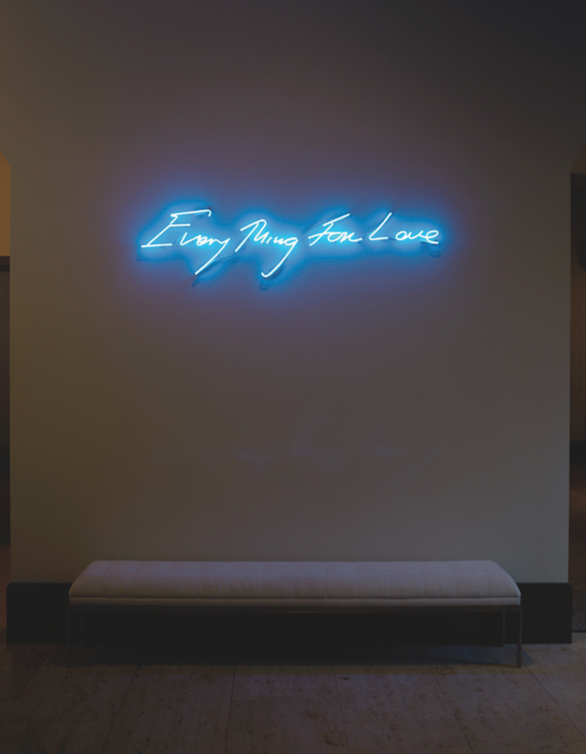 When I arrived, the bright blue luminescence of a neon piece to the left of the main lobby, just beyond the reception desk, caught my eye. Even as I was still approaching for closer inspection, it was undeniably apparent to me as a Tracey Emin work. I confirmed this as I was face-to-face with the azure glow of the textual work, eponymously titled Everything For Love. Right away, I had the sense that this collection was not going to be one of banal hotel artwork that jejunely plays it safe. Personally drawn to works that push boundaries and make intrepid statements that tend toward the social and political—often with a dose of the autobiographical—I was eager for Dr. Galpin to show me around and shed some light onto the collection and its significance. 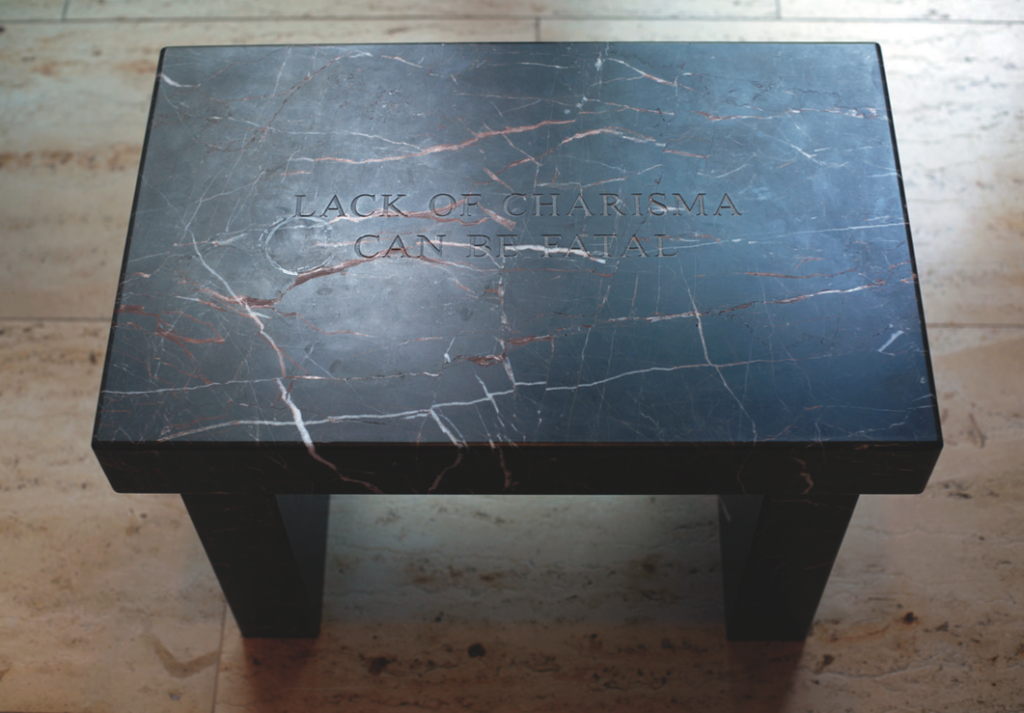 One of the first pieces Galpin began with was Jenny Holzer’s Lack of Charisma Can Be Fatal. The marble footstool bears the titular phrase—one of Holzer’s “Truisms”—engraved in the top of the small sculptural work. Galpin noted its placement, in front of a pair of glass doors that open to a small courtyard, and mentioned that the hardwearing work can be moved to the area outdoors. Light and shadow danced over the smooth surface as she spoke of the piece, and we both admired the subtle interaction between artwork and space; this interplay would later be observed as a strongly recurring theme throughout the selections on display. Around the corner, at the end of a long hallway, is another work by the neo-conceptual artist, though Holzer employs oil on linen with this piece, titled 6. Text: U.S. Government Document. The abstract painting with a strong political message is a far deviation from Lack of Charisma Can Be Fatal, so much so that one might not readily connect the two works to the same artist. The fact that these disparate pieces have been acquired by the same collectors, though not directly juxtaposed in their presentation, hints at the playful yet sophisticated nature of the collection and curatorial approach.

Though the Alfond Collection is quite eclectic, many parallels can be drawn between the works that provide the group of works with a strong cohesion. Some connections are glaringly obvious like the Al Loving’s Untitled, and Jack Whitten’s E-Stamp IV (Five Spirals: For Al Loving); related to technique or materials, seen with Marco Rios’ The Woman Made for Me Was Not Made for Me and Maya Lin’s Silver Thames; or a bit more esoteric, like John Giorno’s We Gave a Party for the Gods and the Gods All Came and Deborah Kass’ Triple Ghost Yentl (My Elvis). The multitudinous avenues of discourse between the pieces in the collection ensure a lasting impression and a continuation of the conversation that they incite once outside of the confines of the hotel. 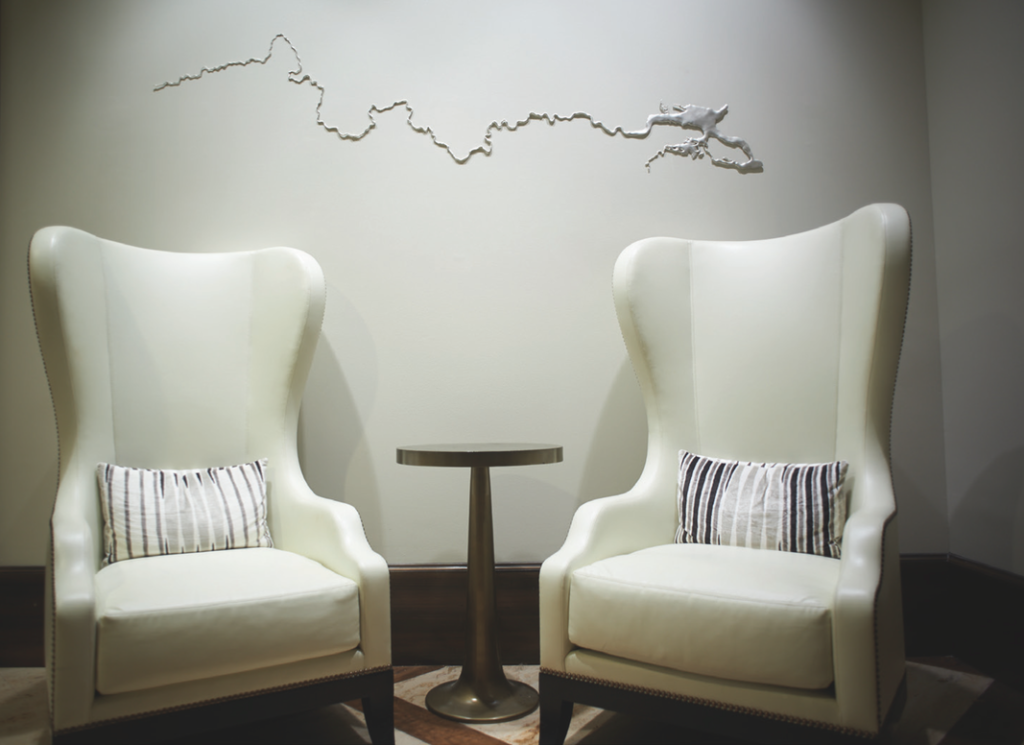 We wrapped up the tour with the Tracey Emin I had initially spied upon arrival at The Alfond Inn. As we chatted in front of the work, a mother and her daughters walked over and asked if they could take a photograph in front of the piece. Galpin and I obliged and stepped out of the way; she remarked how popular the piece had been for photos. I wondered if it was the work’s universally sought-after theme of love, or its prestige, that enticed the group of women to their photo-op. Was one intention more so that of a pure aesthete than the other? Then I wondered if its deliberateness, or lack thereof, even mattered. I thanked Galpin for the fantastic tour and for sharing her passion with me. As I left, I glanced toward the reception desk, at the neon Joseph Kosuth work hanging overhead. The phrase “Language must speak for itself” glows confidently and bright. Art must speak for itself, too, and this collection has an undeniably powerful voice.

Tours of The Alfond Collection of Contemporary Art are given every Sunday at 1pm, and the first Wednesday of the month at 5:30pm at The Alfond Inn. For more information, visit www.thealfondinn.com