At first glance, Bo Bartlett‘s work doesn’t look like anything new. His large canvases are filled with the crisp realism of Edward Hopper, the small-town iconography of Norman Rockwell, and the vibrancy and luminism of George Caleb Bingham. Yet, Bartlett brings it all together to portray a fresh and complicated take on American life as he knows it. Organized by the Mennello Museum of American Art with an extension of four paintings at The Orlando Museum of Art, Bo Bartlett: American Artist features the seductive quality of oil paintings, which stems partly from his large canvases and polished aesthetic. His paintings are subdued with a warm light that looks like the most natural thing in the world—a fleeting, bittersweet, transitional light that falls on his characters. 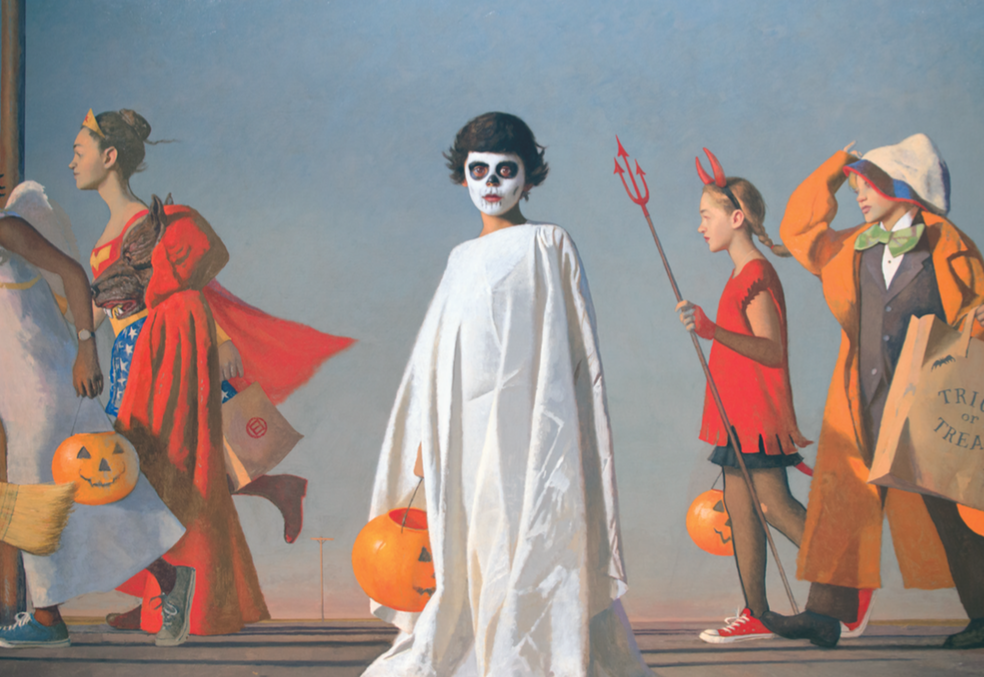 Bartlett is a transitional painter because he dwells in a not-quite-fantasy world grounded in memory and reality. He is both a romantic and a realist, someone who suspends us in our own memories while igniting our imaginations. From his Lacunae Series, Halloween portrays the figure of a young boy dressed as a ghost, frozen in time and gazing stoically at the viewer between two dividing lines on the road. It’s typical of his characters to gaze directly at viewers if they aren’t looking off into the distance with their heads turned away. In Halloween, the central figure’s gaze is eerie in its serenity. As the other trick-or-treaters run in one singular direction to the next house, the boy remains in a non-changing state, defined by the angelic figure on his right side and the devil on his left.

Bartlett at once captures personal purgatory and the purgatory of a nation. He scrapes just below the surface of American life, revealing alienated characters amidst vast, idyllic landscapes. The Bo Bartlett experience isn’t just about capturing relics of America’s natural, isolated beauty; it’s political. Although he has repeatedly stated that he is not an actively dogmatic, ideological, or didactic artist, Bartlett’s work speaks as a commentary on the politics of American culture and iconography. Bo Bartlett’s America is apple pie and Friday night football, but it is also the same America filled with an unshakable, never-ending sense of social malaise. 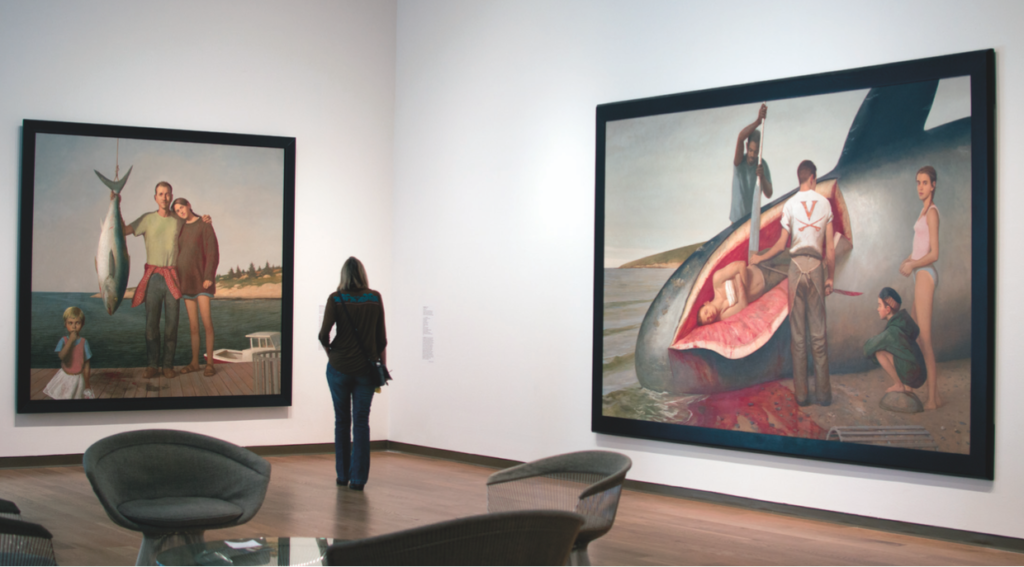 In The American—a painting primarily inspired by a scene in To Kill a Mockingbird in which Atticus Finch shoots a rabid dog in the street—a man holds a rifle in an empty town, defending it against an unseen threat. The American is a study in scapegoating, in “otherness,” and the responsibility of perpetuating hysteria. The other always exists just beyond the horizon, and you can bet that someone in an abandoned town somewhere is standing guard, ready to defend his territory against an unseen, perhaps fictionalized enemy.

Similarly, Oligarchy considers America’s leaders, here representing the wealthy, white, and often male corporate elite. As viewers, we’re not sure if the crowd that holds the oligarch in his chair is parading their sovereign or if they are in revolt. However you may read it, the motion of the painting gives the illusion that he is teetering in his chair, leaving him lingering in the instability of singular power. In Oligarchy, as in America, true power—the power of the masses—rivals positional or monetary power. 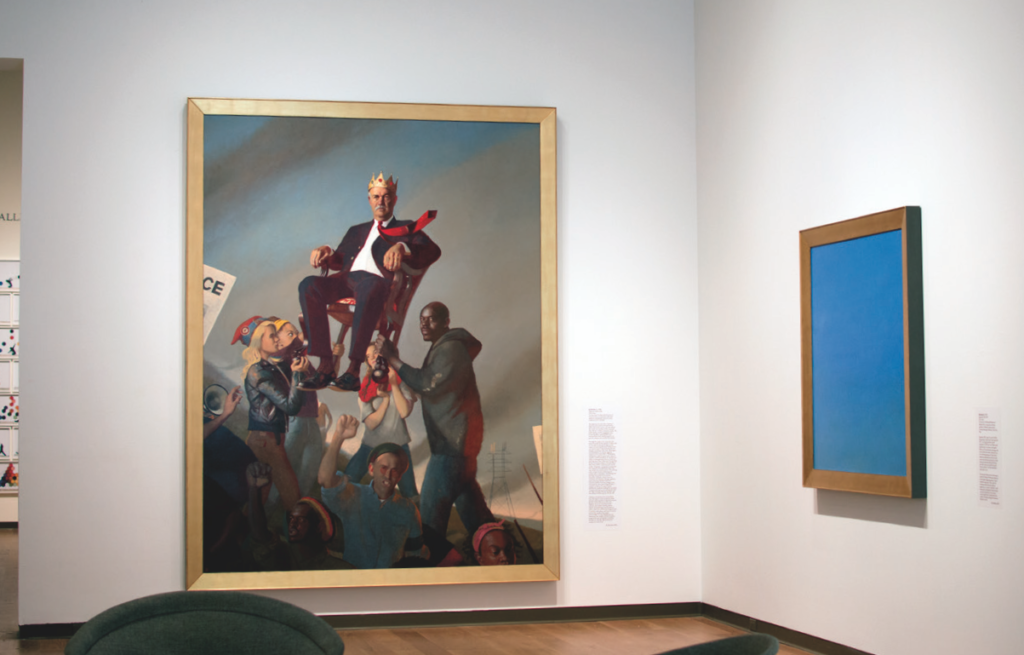 It’s difficult to decipher whether Bartlett is further mythologizing American culture or if he’s scrutinizing it. He clearly values the wholesome, safe, conveniently unblemished America of June Cleaver, but his work operates on potential—the potential of a country disillusioned by the past, paralyzed by the present, and anxious of its future. In The Good Old Days, a couple softly embraces as they revel at their catch. They are confident; waters are calm and still behind them, but their child’s sideways glance reveals an eerie sense of foreshadowing. There is no guarantee that “the good old days” will remain, or that the sea will always be so generous. The pendulum swings both ways.

Bartlett’s work—in all its anticipation and apprehension—is still nostalgic; it somehow reminds us of the thoroughly American childhood some of us have never had, like the pile of leaves we never jumped into or the calm summer days we never truly enjoyed. It reminds us of the optimism that is embedded in our cultural fabric and the sadness that accompanies it. What remains when a canvas is flooded with water and a murky, ambiguous sky, its only inhabitant rowing against a colossal wave? In Lifeboat, the pendulum swings back and the rower has little choice but to push forward. Though a wedding band hangs on a chain around his neck, his will is his sole companion.

Is this who we really are? Stripped of all comfort, are we only as good as our will, our vulnerabilities, and our strength to bear it all? Poignantly alone, tragically determined, Bartlett’s everyman is not universal to everyone who inhabits this country, but he reflects pieces of an America that could have been. He leaves these pieces for you to string together—make of them what you will.

Bo Bartlett: American Artist will be on display until May 5 at the Mennello 900 E. Princeton St., Orlando, FL 32832
Photos by Mariana Mora
You can see more at: MennelloMuseum.org

One thought on “The American Life of Bo Bartlett”

If you are unfamiliar with Wynwood, it is a neighborhood in Miami, FL that is home to over 70 art galleries and even more works of public art. As the melting pot of street art, Wynwood attracts famous END_OF_DOCUMENT_TOKEN_TO_BE_REPLACED