Andrew Spear is well-known artist in the Central Florida area. His style is instantly recognizable—a blend of graphic marketability with a very personal tone and intricate line work. His murals mark many public spaces and cover a wide swath of commercial properties.

On a contrary note, as overt as his work is, there’s also a gap—who is this guy and what makes him tick creatively? Where does his style come from? There’s a rhythm to his efforts, and a beat that’s undeniable. 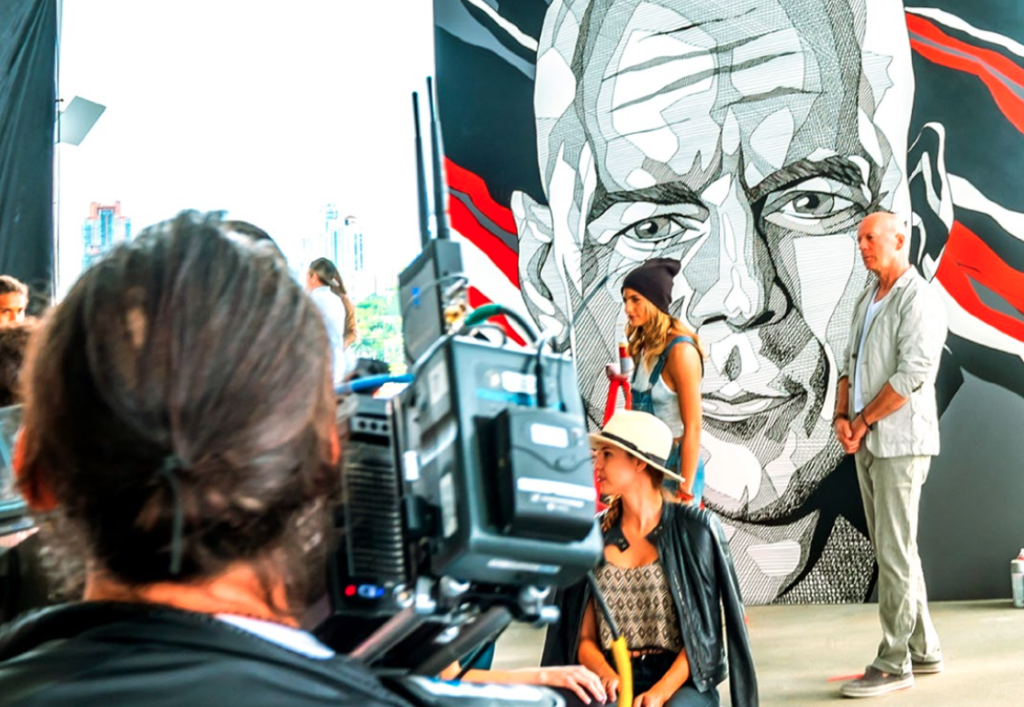 One can see it in full bloom after spending some time with him. There are a lot of nuts and bolts required to make the Andrew Spear machine work. What you get from a personal interaction with him are the impassioned opinions and commentary that pepper his conversations—which can be marathon in length, have lots of digressive twists and turns, are always hilarious and often silly, have plenty of jibes on current events, observations on everyday life, and probably most of all, his love of music. What you come away with is the experience of a sincere and larger-than-life personality who possesses a heartfelt, poetic quality—which comes through in his artwork and in his words.

Speaking of words, we met for drink at The Hideaway Bar for some friendly conversation. 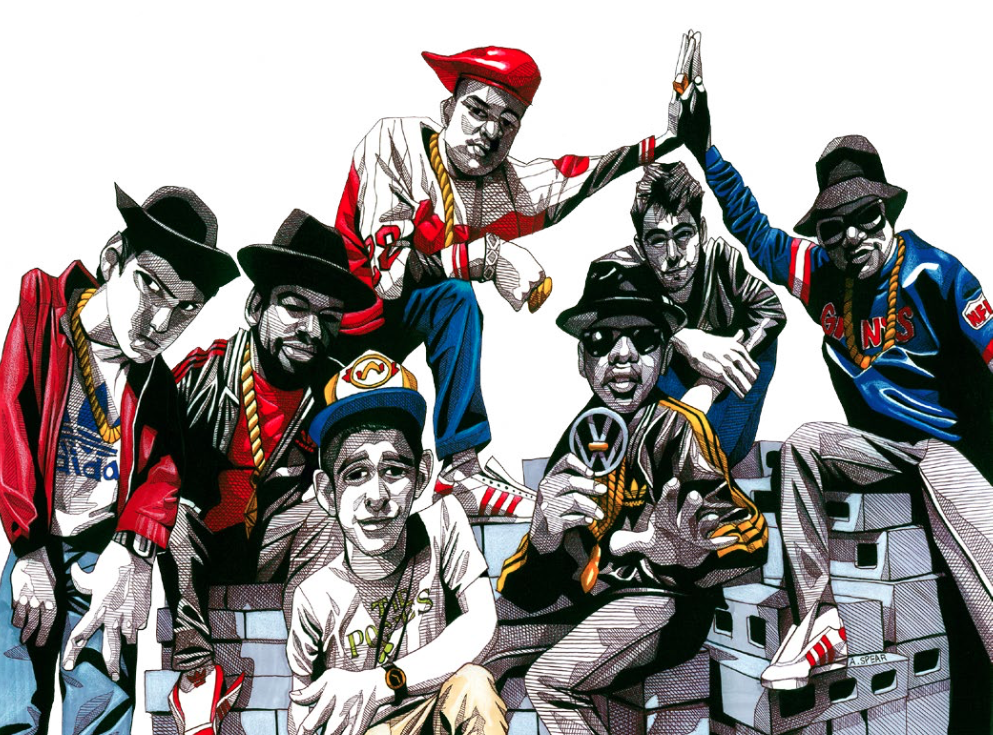 Kyle Eagle: Your social media posts give a good insight into your point of view and your artwork. Like the drawing you made of the then Education Secretary nominee, Betsy DeVos, in the mold of the schoolmaster from Pink Floyd’s The Wall. And textual posts like:

One that ties together both your social media presence and artwork—the Pulse-inspired piece: the Matisse-like birds. You said the idea came to you after watching it on the news and reading about it, and you immediately thought of all the different people it involved, and likened it to a puzzle, and that putting it back together again will also serve to put back together the community. Deep stuff there.

Andrew Spear: Yeah, all those people WERE part of puzzle that was bigger, in the respect to the lives they led, were involved with, and how they rippled across the community.

That piece caught on immediately.

I didn’t have long to do it, which is how a lot of this stuff works—you get the idea right away, and I went with it. It was an honor and, ultimately, a responsibility. She asked me. She could have picked any person, but she asked me, and there was a lot of responsibility…to make something loud with a message, and tasteful. Everyone was giving their strong points. It’s gotten a lot of press: it’s in a John Legend video, lots of news footage. My mom tells me she sees it. I didn’t sign it, it’s about a feeling of trying to have a happier place, and bringing some solace to the community, and what I could do artistically to help when asked by the of owner of Pulse. 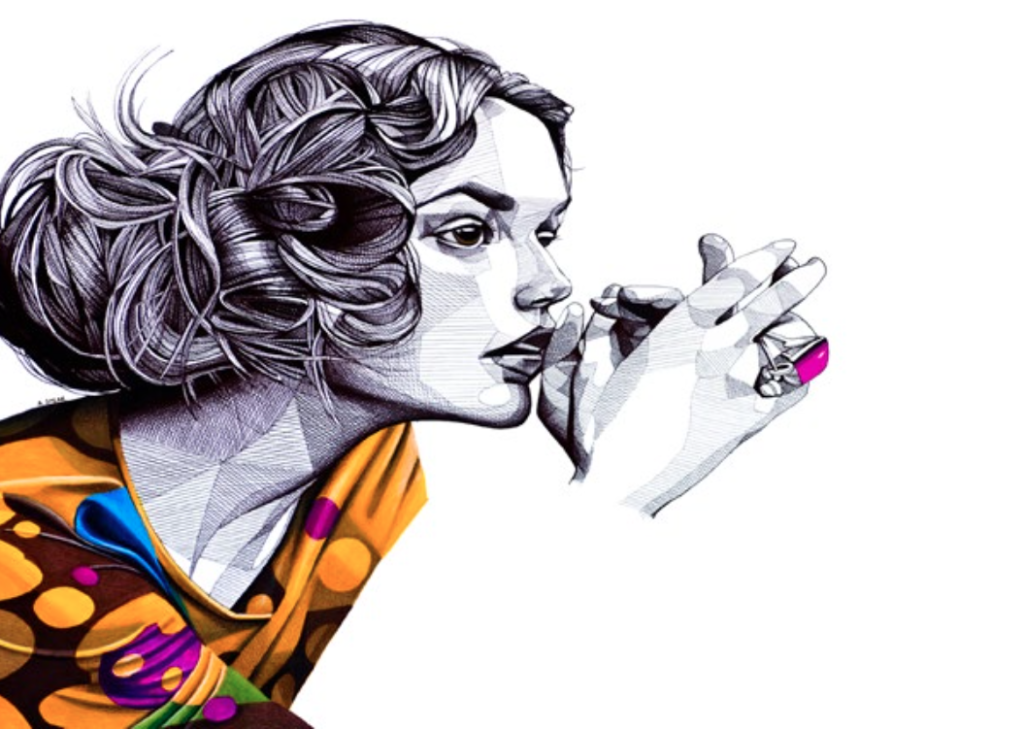 And Then, pen and ink

Your work blurs the line of highly stylized expression and commercial art. That’s rare for an artist, and I say artist in your case because your work certainly has that quality—an expressive voice—and one that lends itself well visually for a number of commercial and marketable reasons. In a league with the likes of Shepard Fairey, Mark Kostabi, and Romero Britto, at least in a regional sense.

Not in the case of Britto’s political beliefs, though.

Kidding aside, do you think you’re known mostly for your commercial work?

If so, do you find it limiting or frustrating?

A little. I don’t know, I think’s it’s interesting to bring up the question of the commercial artist and the galley artist. I went down the gallery route when I first started, and there was so much pressure to deliver, and I felt I was giving up work that wasn’t hitting the mark, and giving a gallery 40% of what you make of the sales, IF you make sales.

Not a lot of guarantee.

No, not a lot of guarantee. It’s a gamble. Whereas commercial work, yeah, you’re doing something more restrictive, but if you can still get your sense of pleasure out of what you’re doing, then it’s great, it’s a match made in Poland. I feel in this day and age with the computer, you can make your own entity- I’d like to be in bigger galleries, sure—bigger “art” is seen by bigger eyes. If you can do it on your own, and not have deal with that world too much, then I think it’s better for an artist. Notoriety is good. 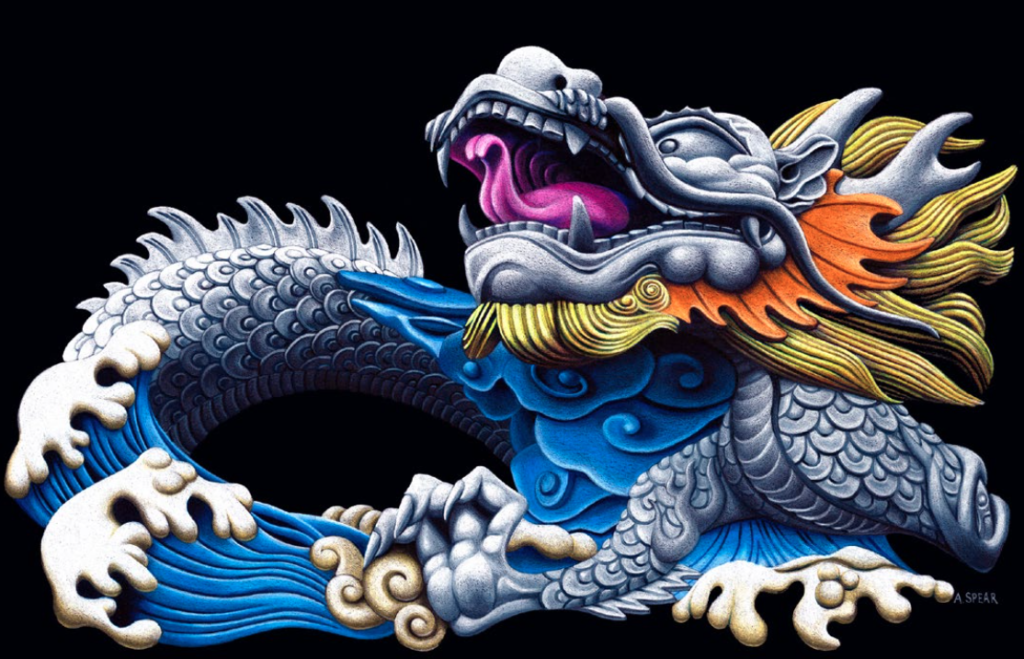 If the work is good, it will always find its audience. Have you had your ideal outlet or exhibit yet? Have you done your best work yet?

Have you made a masterpiece yet?

I’ve made one. Last year, the colored pencil piece with the woman with the deer behind her. 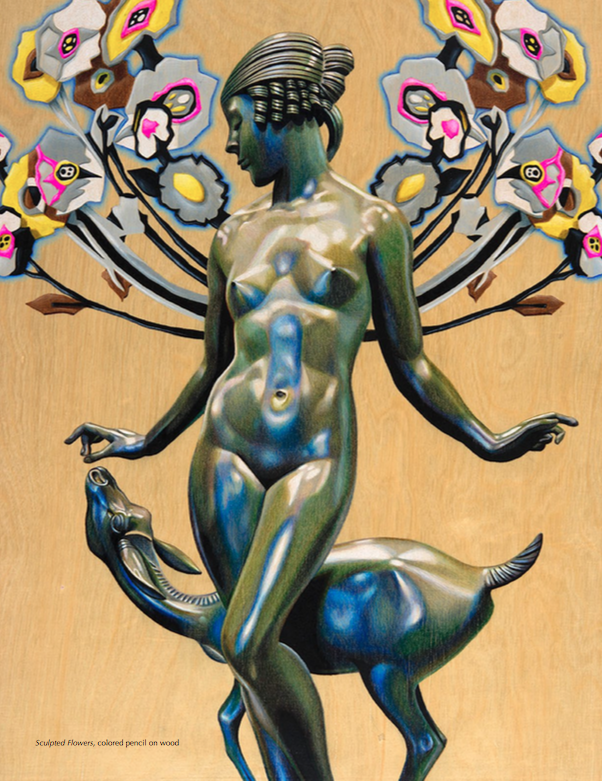 Know it well, it’s beautiful and vivid. Certainly doesn’t look like colored pencils. Where do you go from there?

That was the only time I had to make one piece last year, then all the commercial stuff fell into place—Hard Rock and stuff took over. I’ve had some time this year to go back to more personal work. Blackboard and wood and colored pencil.

Let’s bring that up, colored pencil. There aren’t too many artists who specialize in that.

It becomes one in your hands.

That kind of proves my point. What I’m doing now is that I’m not drawing anything out. I’m taking a piece of paper or board and going full-on color. And you can’t erase, can’t make mistakes…it makes me nervous. The colored pencil stuff I’m doing now is way more advanced than the murals. 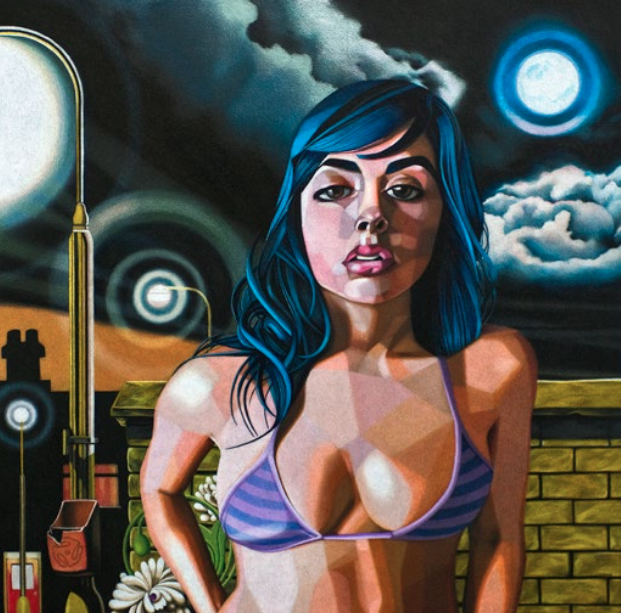 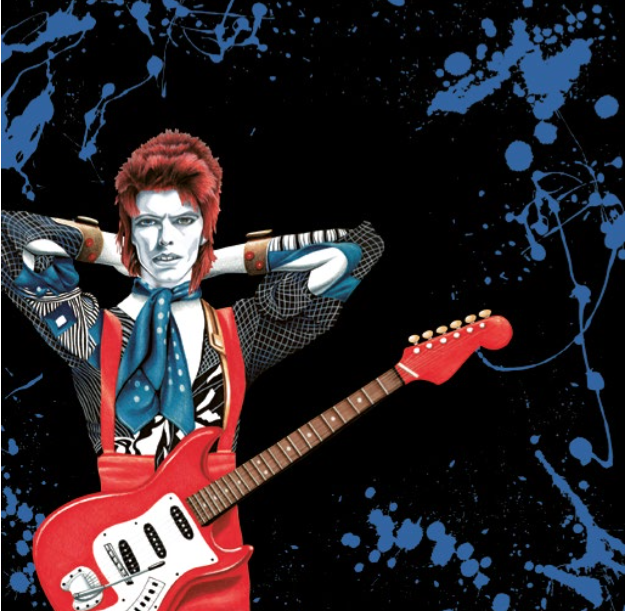 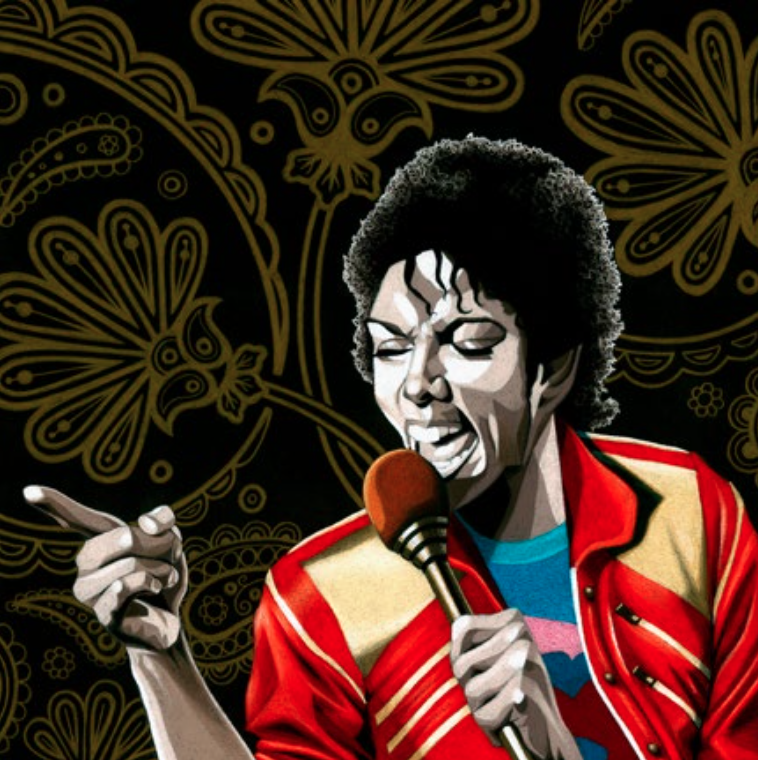 It’s not the wizard, it’s the wand.

I dropped out of school because of the criticism they gave me for colored pencils. I used them because I couldn’t afford paints. You get a class syllabus and it tells you to go out and buy 600 dollars worth of supplies that I couldn’t afford. It what’s what I make out of it, it’s how I got my voice out there. Like, Jack White started out with a plastic guitar, and now look at him.

Ornette Coleman played a plastic saxophone; he became jazz royalty. So, your work that comes from a place that is from you—within your imagination and more personal—is powerful stuff. The vivid quality, circus-like and surreal. Talk a little about it. What are you drawing upon for influence? Who and what? Where’s it coming from?

Making artwork is like writing a song. Laying down the bass here is like where the colors go. I’m more of a music person than an “art” person. I think you look at my work and you see…hear a piece of music in them. The line work is like sound waves. 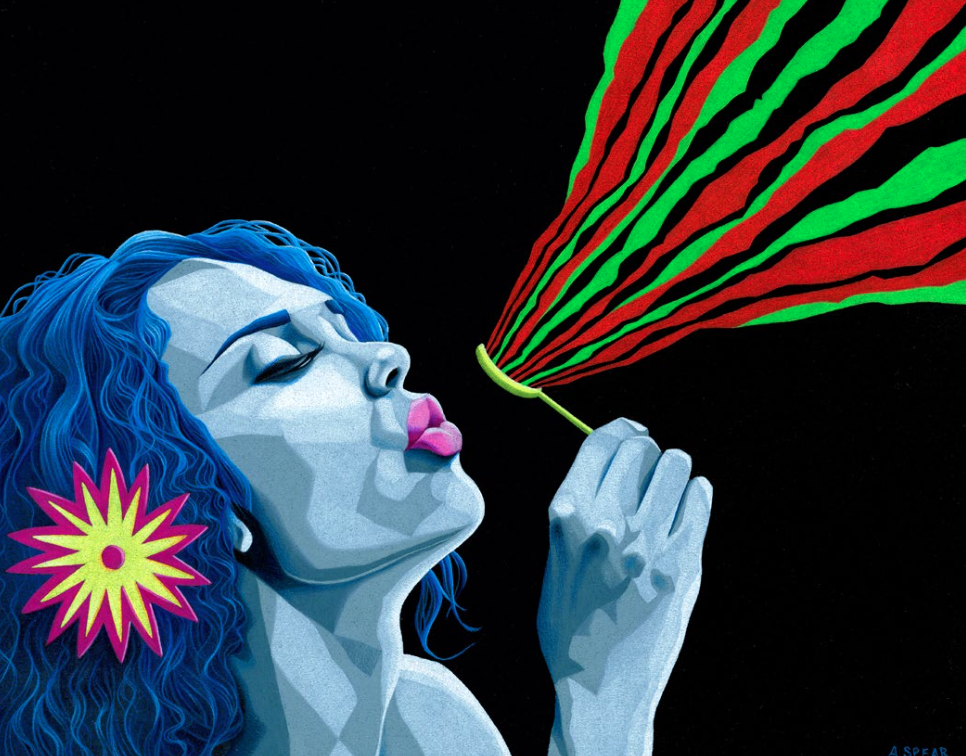 Your passion for murals, your push behind them? St. Pete? Clarion Street, San Francisco? The future of them in the region? 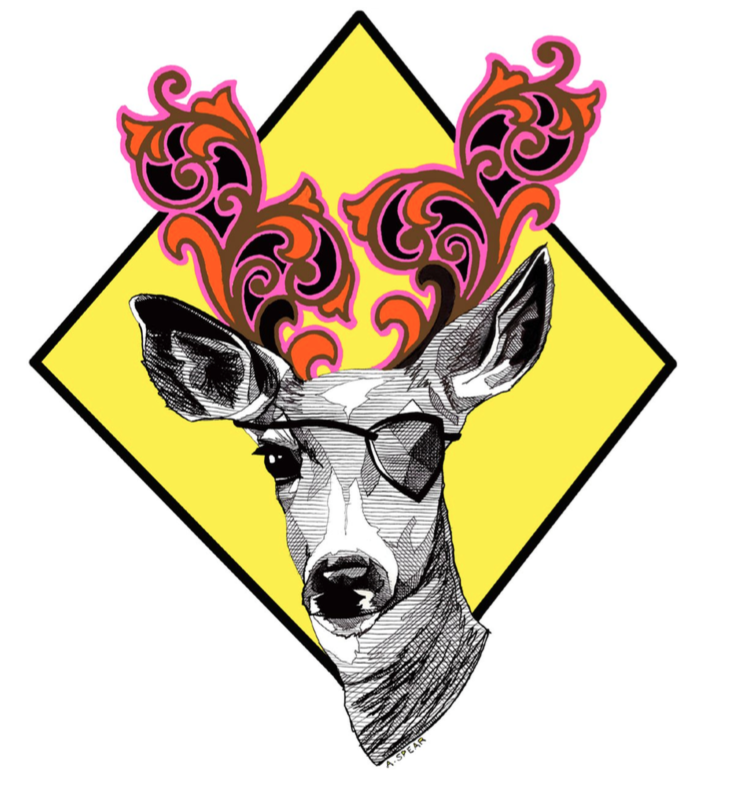 You’ve had some ambitious ideas yourself about this: the I-4 project.

That would be a project, and idea, of exchanging the talent from the St. Pete/Tampa area with the talent we have here in Orlando, really showing off that Central Florida has artistic merit and a talented community. This is an idea that takes lots of relationships, coordination, and public planning by committees, etc. A larger scale than what Sam Flax has been doing, and in the same vein as the SHINE festival. 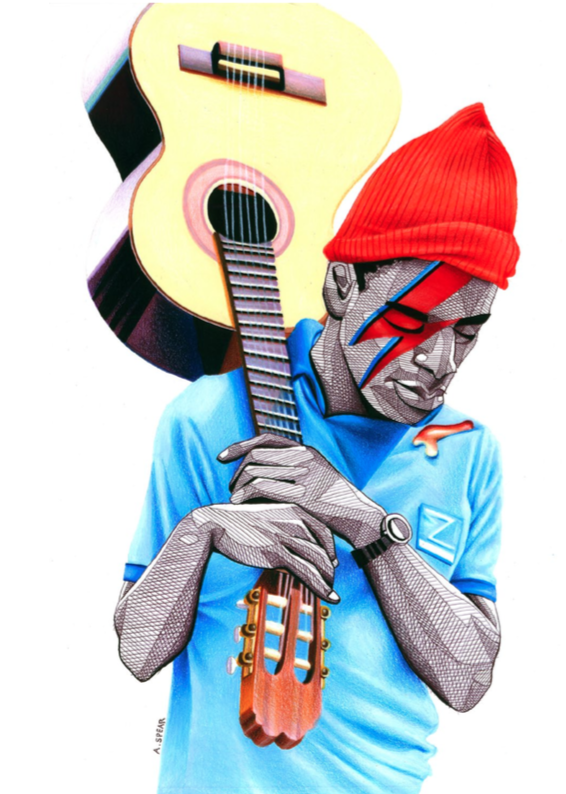 If seen to fruition, it would certainly add a new dimension to your career. Andrew Spear the organizer, curator if you will, in addition to prolific artist, which is probably one of your strongest attributes—being prolific and delivering.

Blue-collar upbringing. You do your job and are raised not to bitch about it. You want it or not; there are people in line who will take it. I never think a job is not good enough for me. When your ego gets involved is when you get sloppy and it gets in the way. You stop producing.

You can see more at: SpearLife.com

On a spring evening in Tampa, Florida, a warm breeze carried Sarah Howard, Curator of Public Art and Social Practice at USF’s Institute for Research, onto a patio of one of the city’s many foodie END_OF_DOCUMENT_TOKEN_TO_BE_REPLACED