The question as to what defines art remains disputed largely due to the cyclic nature of new creative mediums flourishing. Disregarding established definitions of artistic legitimacy, these outlets find their form and then evolve, pushing through unfamiliar territory. If we must insist on greeting these new ideas with a litmus test for art, I’d suggest we—in order to understand what art is—should rather ask, “Why?”

Why does gazing at a painting affect us? Why do we read poems, listen to music, or enjoy theater? Is it because we have an instinctive desire to feel outside of our own frame of mind? Empathy coaxes us to momentarily step away from our own inner voices, the loudness of the emotions we trap ourselves in, in order to relate to someone else’s reality. By virtually inserting us in the role of another person, one particular medium has steadily matured throughout the years: video games. 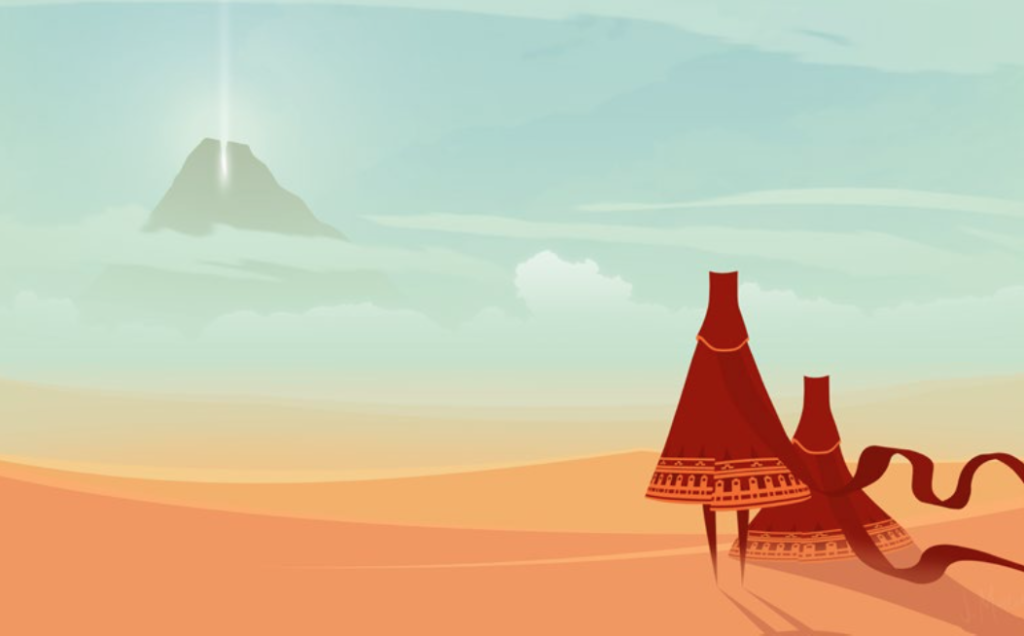 As with movies, comics, and street art, game auteurs have been breaking the public’s expectations with the influx of narratives that cannot be told through other channels without losing their emotional core. Nonetheless, it would seem most video games choose to pander to a survivalist need and, often, provide a world-saving justification for aggression, revenge, or the eradication of an adversary. It is a primal emotion easily employed by the gaming industry. Faced with a wall of violent adventures seeming to encourage one to “take this gun and indiscriminately mow down anything that looks like this,” a non-gamer may, understandably, walk away unimpressed. There is, however, an abundance of games that seek to evoke a different set of emotions, presenting themselves not only as a valid method of expression, but also as an invaluable tool for exercising empathy.

Take, for instance, Journey, where your robed avatar travels across a desert, eventually running into and bonding with a mysterious traveler who joins you on your trek to the top of a distant mountain. No words are ever shared: communication is mostly achieved through vague chimes and physical gestures. Together, you quietly figure out your path across sand-buried ruins, sneak past ominous sentries, and ultimately push through a snowstorm as you march up the mountain. Exhausted, you nearly die side-by-side in the snow before one last burst of hope sends you and your companion walking into the light at the top of the mountain. After the credits roll, you learn that your fellow voyager was, in fact, controlled by another real-life player, discreetly and randomly matched up with you by the game. When I completed Journey, as I pondered that I had just played a two-hour metaphor of life, love, death, and the boon of companionship, I received a kind message from the stranger I was matched with: “It was wonderful playing with you, partner. Thank you.”

Other examples include Fumito Ueda’s Shadow of the Colossus, a game about a young man whose grief over a woman’s passing leads him to a calamitous pact. Life Is Strange places you in the role of a young art student, dealing with such sensitive subject matters that the game comes with a merited trigger warning. Braid, a brilliant, mind-bending, and ultimately satirical take on the Super Mario Brothers “rescue the princess” trope, ends in your discovery that the entire game represents the stages of realization that you’ve played the villain in a toxic relationship; the princess, a metaphor for a partner who is in no need of assistance—she has already rescued herself and is willingly in the arms of another. And That Dragon, Cancer, a hauntingly beautiful yet devastating retelling of the untimely death of the game creator’s four-year-old son, lays bare a family’s love, hope, and heartache from a particularly intimate perspective.

As more young artists are exposed to examples like these, the field of creative minds drawn to use the medium in ambitious new ways grows further. Perhaps rather than simply discourage children from playing video games, we could instead suggest games that expose them to different emotional palates other than just id-driven escapism. Encouraging and rewarding creators who dedicate themselves to help explore the full spectrum of human emotion will ultimately result in a wider selection to choose from.

If art is to be defined by its ability to ask questions, as some propose, the question artistic video game projects may seek to ask is how willing a person is to see themselves in someone else’s shoes. Whatever form this question may take, it will ultimately strengthen the foundation of a more empathetic future, and may indeed help save the world.

Fall—the air is a little bit lighter than it has been.  Should we thank Hurricane Matthew for the change of season?  It’s as if it spun by and popped the bubble of heat and moisture that had been END_OF_DOCUMENT_TOKEN_TO_BE_REPLACED