I am of the belief that architecture fails to be significant if we don’t address it in the context of its intended use for humans. If we somehow fail to acknowledge the symbiotic relationship between edifice and dweller, we’re doing a great injustice to both. I surmise that, like people, buildings must have souls, and their often nearly anthropomorphic qualities are proliferated by the energy from occupants both past and present.

It didn’t take me long to decide that I wanted to write about the Jack Kerouac house when tasked with this month’s architecture feature. I had walked by the College Park bungalow many times with friends who lived in the neighborhood, but had never been inside. Though merely a modest 1920s home not unlike one I had lived in, it always intrigued me. At the rear of the home, there is a tiny bedroom, bathroom, and a sunroom that spans the back—this is the apartment space that Kerouac rented and lived in with his mother in the late 1950s. 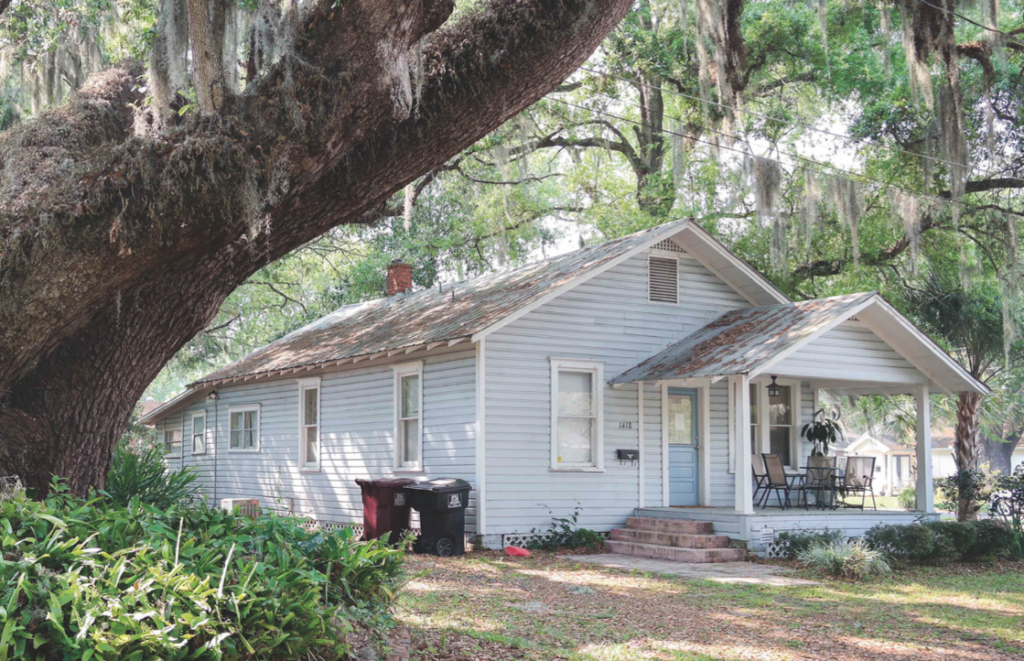 I spent an afternoon and explored the space with the house’s current writer-in-residence, Glendaliz Camacho. She pointed out the back steps outside—three, nondescript brick ones—and remarked that she sat on them while imagining Kerouac doing the same decades prior. This is the magic of historic architecture—its lasting, unadulterated features forge a connection between inhabitants from different eras of the home’s narrative. Camacho tells me that she quickly felt a sense of ownership and stewardship of the home. “Things end up feeling like yours. You protect the space and you worry about it. The house feels you out just as much as you feel it out, and you consider what energy you’re going to bring to it.” It was clear that the space had already provided an affecting experience, as she was lamenting her upcoming departure.

Though the home is somewhat unremarkable and commonplace from an architectural design standpoint, it’s undeniably clear that it imbues its residents with an extraordinary energy. As for the idea of an apparition of Kerouac haunting the house? “My thinking of him is a summoning,” Camacho posits. Surely, all of our ruminating on him as a literary figure and previous tenant invited him into the space while we were there, and his presence suffused the day with a plenitude of inspiration I’m not soon to forget.

For more information about the Kerouac Project of Orlando, visit http://www.kerouacproject.org/

One thought on “The Kerouac House”

“What is the difference between going to a national park or going to Disneyland?” At first, the question might seem trivial, but through his ongoing series, Aesthetics of Eden, Brooks Dierdorff shows END_OF_DOCUMENT_TOKEN_TO_BE_REPLACED