DRES13 is an artist and graphic designer whose work is characterized by visceral forms, fierce female subjects, and dynamic compositions. He’s also clearly into fan art, with potent depictions of Daredevil, Agent 47 of Hitman, and even Powdered Toast Man. Many of the designs have bold lines, variable textures, and an evocative use of gradient—they just pop. Inspired by classical painting, the art that would be much like a comic book, album cover, or promotional poster is taken to a new level of mastery. This art is powerful. 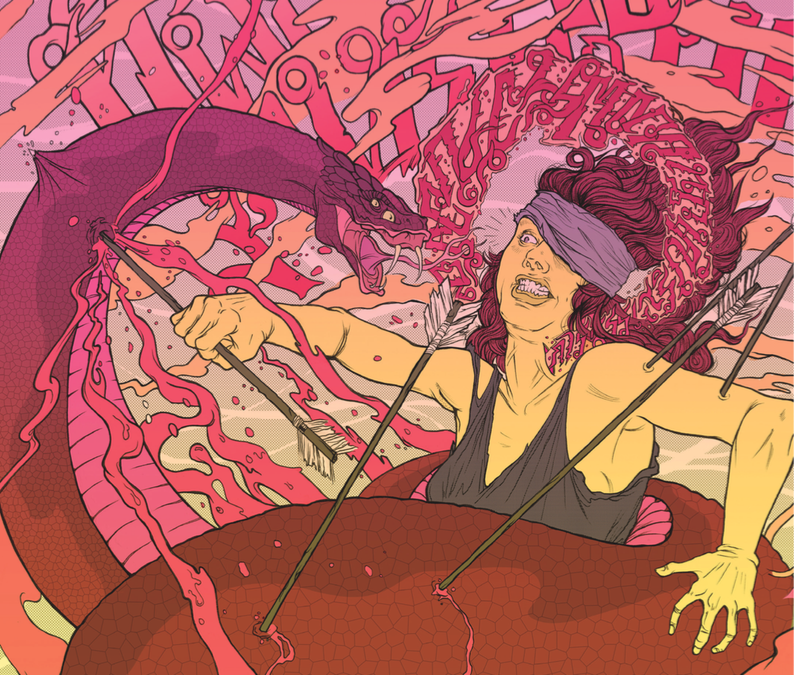 I didn’t know of this mysterious DRES13 until about a week before we met. I got a call from Matt Duke who told me I had to check out his website ASAP. My eyes were hooked on his style after just the first row of images, and my heart was hooked when I saw the image of Ren and Stimpy with Powdered Toast Man. I was grinning wide when I thought about the opportunity to meet a designer with such an excellent portfolio.

We arranged to meet at The Imperial at Washburn Imports on a chilly December evening. The location was a great pick. The back area is quiet, and filled to the brim with antique furniture; an ideal place for an interview. It was pretty chilly, and there I found DRES13, as I knew him, with a tight, short-sleeved t-shirt on. He looks like a guy who takes care of himself, fit and healthy, but with the tired eyes of a hard worker after a productive day. He told me to call him Dre, and I asked him if he needed a jacket because we’d be talking outside, but he wanted to tough it out. Eventually, the cold would get to him, but we took our seats outside to conduct our interview and drink our beers. 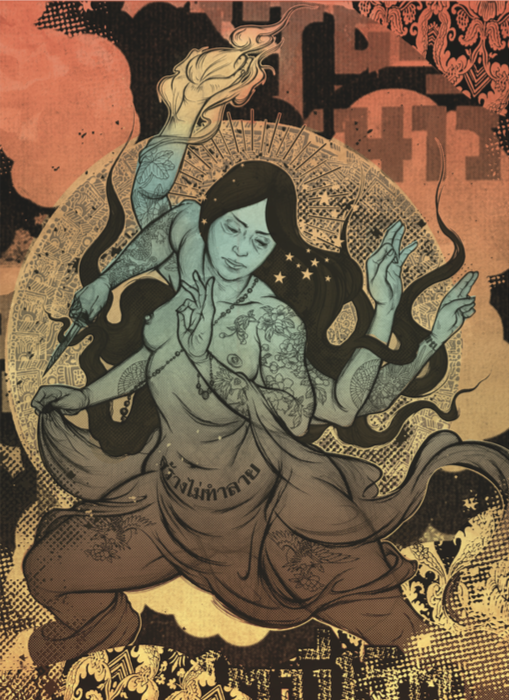 I had to wonder where he got the name DRES13. He told me, “The story of how I landed on DRES13 is pretty lame to be honest. During the early 2000s, I was involved in the whole car tuner scene, and my project car was a Nissan S13 240sx. During that time, I was posting photos of the project under the username DreS13, and every so often I would post a current design project or illustration. Those posts began getting traction and I gained a small following based on the art. From then on, it stuck. I’ve continued to try and build the name into a brand for my illustration and design work.”

DRES13, aka André Greppi, was born in Massachusetts, moved to Kissimmee at six years old, then to Orlando proper in 2006. Now, he lives in Winter Garden with his wife and his first child, with one on the way. I asked him what cool places he goes to around there, and he said, “Target!” He seemed delighted to tell me about his son, who is taking after his dad: “He loves to draw!” He keeps all of his son’s work, so maybe we’ll be featuring a Greppi Jr. in the future.

It has been quite a while since Greppi has been particularly active in the local art scene, but he tells me of years past, when he and a group of artists banded together as “Phantom Limbs.” Together, they had shows happening just about every weekend. He told me about Neon Forest and the Falcon, which sounds like the title of a fairy tale. The Falcon is actually a bar and gallery on East Washington in Thornton Park, and Neon Forest was a gallery space on South Orange, but is now permanently closed. 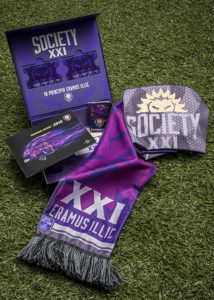 Now, Greppi has a day job. He’s the Associate Creative Director at an advertising firm, Say It Loud!, where he completes specific graphic design jobs for individual clients. He serves the Orlando area, and you can see a prime example of his connection to Orlando with his poster for the 2015 Orlando City vs. Philadelphia Union soccer game. I haven’t seen something so powerful in a while—the image of a strong lion’s paw thrust down to the ground, wrapped in a measly snake, with a mix of printmaking elements and some painterly strokes. This image really stands out. Say It Loud! won quite a few awards for their Orlando City Soccer inaugural season ad campaign. Personally, I think he ought to be making all the posters at that rate, and if I were commissioning propaganda, I would certainly hire him. Not that I support the use of propaganda; I just believe in the visual and symbolic power that I think Greppi knows how to imbue into an image that he is hired to create.

I wanted to get to know the Greppi process, but it’s not easy to show simply with words. I asked him if he draws from comics, cartoons, video games, or graphic novels. He told me that it might not be apparent, but he’s really into classical religious art. “Depending on what I am working on, I draw from various sources. Sometimes, I just go right to it and if the sketch looks good, I will go from it. There are other times where it is not what I am envisioning, so I either take pictures of somebody trying to do the pose, or I will ‘Frankenstein’ pieces and parts from different things to build my own photo reference until I get what I want, and then I’ll draw from that. It all depends on how I want to attack the project. Sometimes, I want the anatomy to be more spot-on and other times I am okay with exaggeration.” You would think that working straight from the first sketch without references takes a lot of confidence, but it’s clear that Greppi is confident in his ability. I would be, too, with a killer array of work like his. 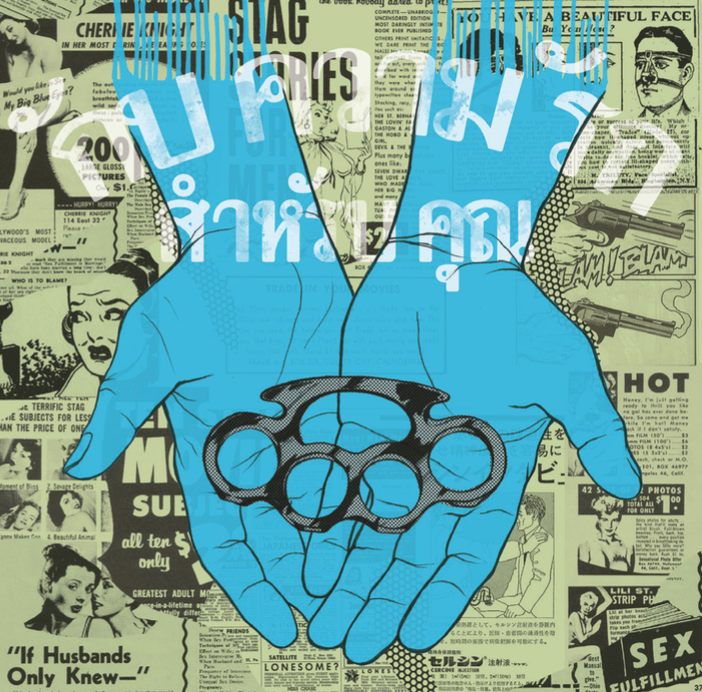 For You With Love, illustration

I think that having such a high bar set for yourself, with such quality, refined, and thoughtful designs, might lead to some problems with artist’s block. I told Greppi about my personal style of art where, nine times out of ten, I just go for it. I don’t plan, I just get the materials and go for it. I was trying to convey how I wish I could be like him, but I think he felt similarly about me. “Sometimes I am guilty of overthinking to the point where I start off, and I am happy with the idea, but when I get around to working on it, this weird anxiety takes over. It’s frustrating, because I will question everything and hear negative things in my head while I’m working. Most times, the majority of things that I finish and put out, I hated or was angry with during the whole process. I could be wild about it, but I am a little more reserved. There are artists that have your wild energy and they have the attitude that this is their work, however it comes out is how it is supposed to be.” The grass is always greener on the other side, I suppose. I think he’s better off doing it his way; the weird anxiety might be a good thing. 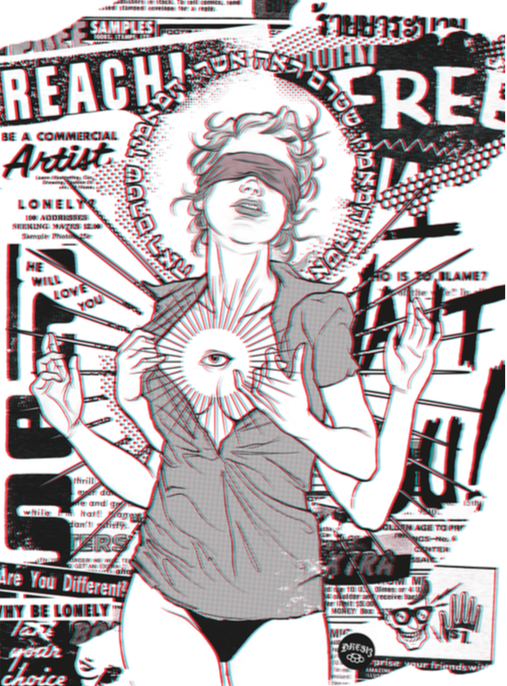 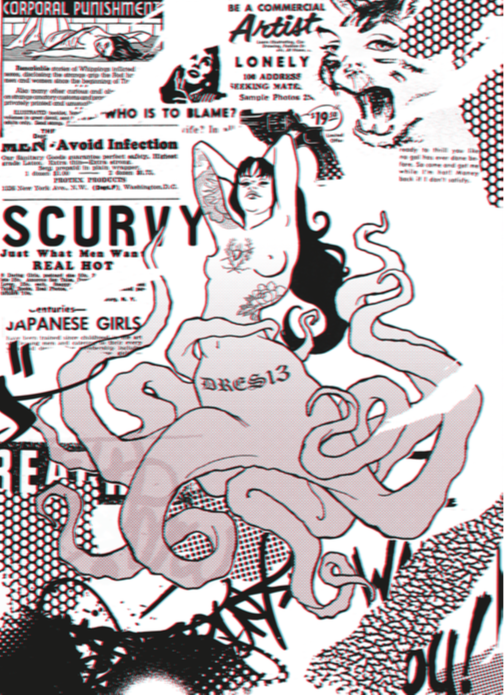 Recently, Greppi worked with Jack Daniels to illustrate images for their Tennessee Honey campaign, where he illustrated a futuristic-fashioned female surrounded by mechanized honeybees. Greppi has also been invited to work on illustrations for a project by Perfect World Entertainment called Neverwinter, an action-MMO about the Dungeons and Dragons universe. He’s even been invited to work with some of his own artistic heroes on an art book based on John Carpenter’s horror film, The Thing. It’s called The Thing: Artbook, and you should be on the lookout—it’s got a huge, totally jam-packed list of artists working on it. I tried to count, but I got lost somewhere around fifty. 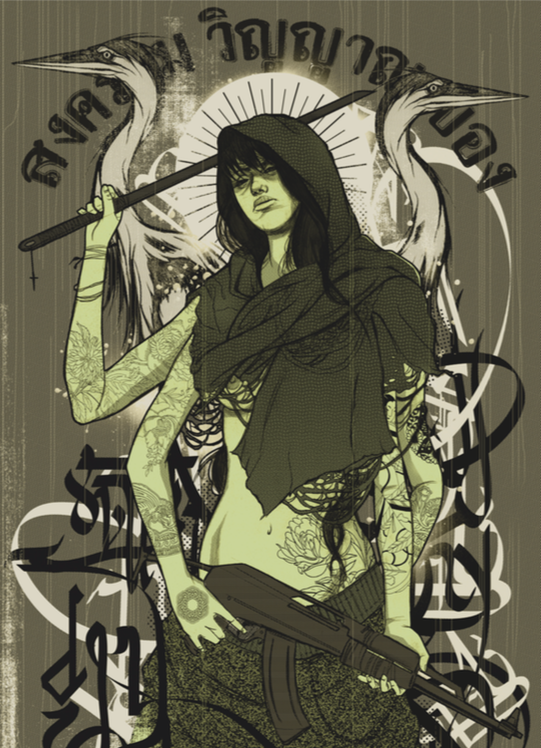 We ended off with a few silly questions about random stuff, ended the recording, and closed out our tabs. He went home to see his family and I went to the Artborne Annual celebration and gallery show at the Gallery at Avalon Island. I’m really happy to be a part of this publication, and I am glad to be able to share such a talented graphic designer with the Orlando community. André Greppi’s work needs to be known. Say It Loud! is making moves, and any business that needs advertising ought to be looking no further. If you want powerful, evocative, subliminal, and just plain stellar work, you want the talented and meticulous mind of DRES13. I always conclude the interview with one simple question. “What is your mantra?” André Greppi tells us to take step back to look at what we’re blessed with and say, “Get to work, it’s time to earn it.”

I have abandoned Orlando for the past two summers to live in Philadelphia and work on my MFA in a low-residency program. I left the city in mourning this June, and found that my own grieving process END_OF_DOCUMENT_TOKEN_TO_BE_REPLACED