Chances are, if you’ve lived in Orlando for any period of time, you’ve heard the name Billy Manes. Manes studied history at Florida State University where he learned he liked “the feeling of words crashing up against one another, the rhythm of speech, and the depths it defines.” Upon graduation, he pitched an 18-page review of a Prince album to the Tallahassee Weekly. He was offered a job and later became editor. Manes moved to Orlando after a romantic tragedy. Here, he was picked by the Orlando Weekly via Lindy Shepherd (the arts editor at the time). He spent a few good years in the classified ad sales department and wrote about entertainment on the side. He then spent the next decade writing a nightlife column. Manes ran for mayor in 2005, and in June of 2015 became Editor of Watermark Magazine.

This month, I had the honor to interview this Orlando icon. 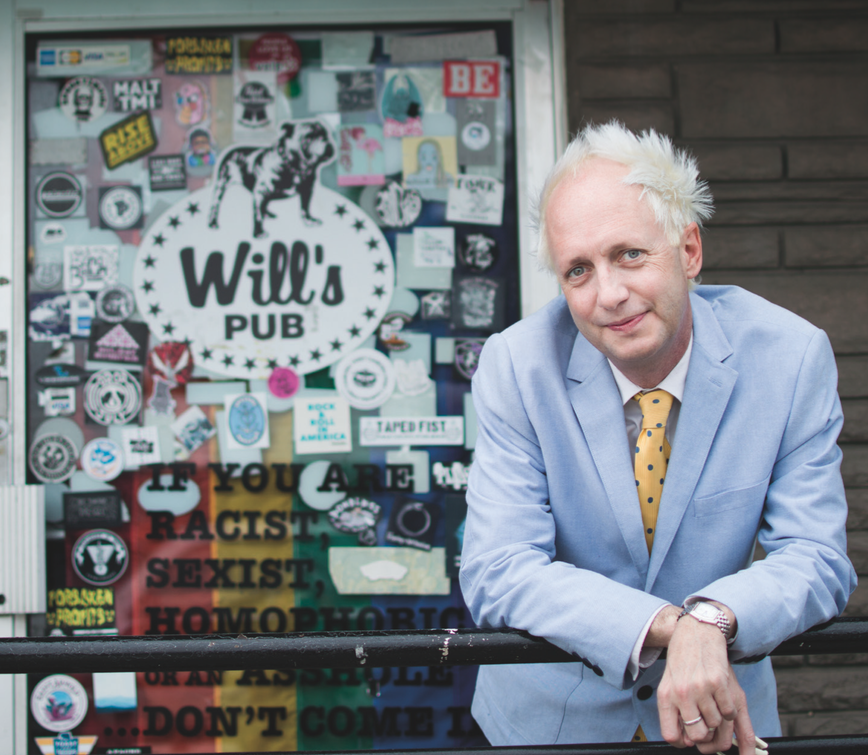 What are your hopes for Central Florida’s art scene?
I understand that it sometimes takes a little bit of both—money and genius—to get things moving, but some of Orlando’s public-private nonsense has crippled creativity and, effectively, carried some of our best arts administrators and artists out of town on a rail. There’s no denying, though, that Orlando has established itself as an arts hub almost in spite of itself, or at least in spite of its governance.

What inspires and motivates you?
Social justice, generally. But on a more visceral level, the love of my husband, the licks of my dogs, my own frankly undeserved successes.

Anything you’d like to share about your relationship with words and communication?
The unexpected consequence of shared words is that they are far better than the sum of those which remain unspoken or unwritten. Though, there is a value to pregnant pauses, too. Timing is everything.

Can you tell us about your time at the Orlando Weekly?
I was with the Weekly in some capacity from 1997 through 2015. It was my other family, and those working there did save my life on more than one occasion. I built a “brand,” if you will, and simultaneously was able to advocate for causes through language. That was an amazing feeling, and it remains one today.

Can you tell us about your transition to Watermark?
Watermark knew what it was asking for when the 23-year-old institution hired me. I, however, was faking some bravery while withering on the inside in my first months. How was I going to carry my reflexive voice into a completely different setting? Fortunately, one week after my start date, the U.S. Supreme Court approved marriage equality; my footing in that area was pretty strong, as I had lost a longtime partner in 2012, and then officially married my best friend Tony on Valentine’s Day of 2015. Of course, we now know that there are backlashes—both political and personal—to progressive victories, and almost one year to the date of my starting day at Watermark, the Pulse shooting happened. I guess what I’m saying is that it never felt like a transition, so much as it felt like an imperative. I was going to push my own boundaries to try
to make the world better, no matter what.

Where do you see Orlando in the next decade?
It’s almost hard to say, given the political uncertainties playing out on the federal
and state levels. But in the two decades I’ve lived here, I’ve seen an organic development, a hyper-core of creative types supporting each other as the whole city snowballs into something
much better than it ever has been. I see Orlando thriving.

You can see more at: WatermarkOnline.com

3 thoughts on “Billy Manes: The Rhythm of Speech”

Forrest Lawson’s series Closeted is an ongoing sculptural body of work exploring what it is like to come out as gay. Now more than ever, the struggles of the LGBT community need to be heard. Lawson END_OF_DOCUMENT_TOKEN_TO_BE_REPLACED