The five minutes spent waiting outside of Ethos for Scott White’s arrival felt much longer in the Florida summer heat. We met to walk around inside and see his work on the walls, but we had to navigate around people eating, so conditions weren’t ideal for an interview. The whole place shows local artists, and White’s work dominates a good chunk of the wall space. We had a brief tour of the artwork, then decided to go to Rise Above. The shop had customers, and the back room was occupied, so we finally went across street to Lil Indies, which is always a nice place for conversation. 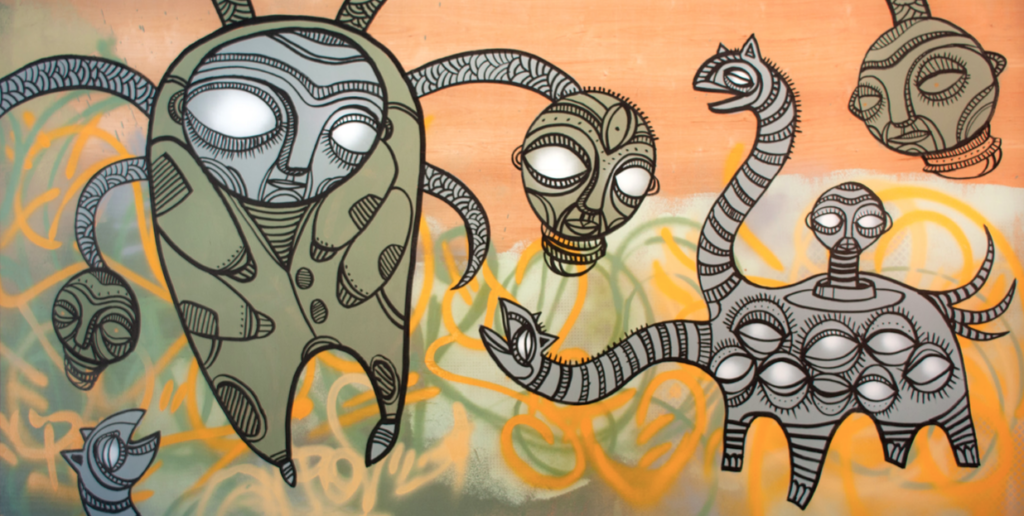 White is a professional tattoo artist, painter, and musician. You can see his work on the flesh of many happy Orlandoans, or on Instagram @largeteeth. Starting off, I had to ask, “Why largeteeth?” Everything else was taken; he and three friends brainstormed to get an easy-to-remember, open-ended name. Essentially, it’s just White now, but it was initially meant to be a collaborative project. He elaborated on his passion for collaborative work: he thrives on the satisfaction of completing someone else’s work, and also the same satisfaction in seeing how another person interprets his unfinished works.

Everyone Feels this Way Once: Escape, acrylic, spray paint, marker and oil pastel on wood

Rise Above is located in the Mills50 district of Orlando. I asked White about his favorite spot, and he said it’s the whole district. “It’s got its own identity at this point, no longer the street that connects areas.” He has no particular “hangout” place to go as he doesn’t drink much, and has an eight-year-old daughter he spends a lot of time with.

White’s work is reminiscent of street art, but he hasn’t done any walls since 1994 or ’95. Despite this, that influence and love has carried through to his work in recent years. He also really enjoys folk art, so his work tends to look like a stylistically layered mash-up. Back in the mid-’90s in Apopka, there was a budding street art scene but a police crackdown on graffiti resulted in some people serving jail time. That was an easy segue into working in and hanging around tattoo shops. Coincidentally, a graffiti artist from the music scene was the one to introduce him to the opportunity to meet tattoo artists. 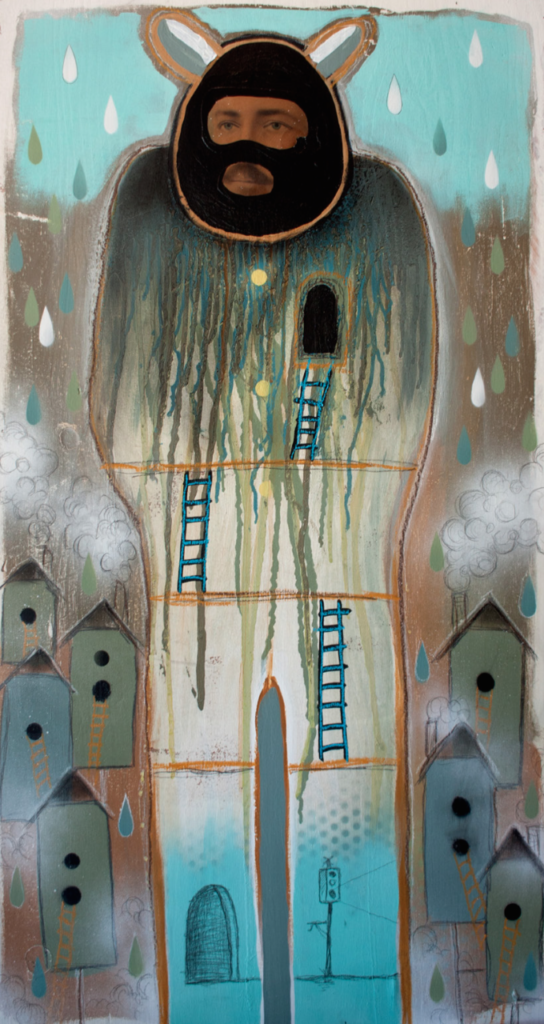 Home is a Dark Hole, acrylic, collage, pencil, and spray paint on wood

Between making a point, asking a question, and talking about himself, White said that he would rather not think about what the piece is meant to do from the get-go and just go for it. Typically he starts with no idea or basis. “At this point, I’m all about just being positive. Hopefully it makes people happy. It makes me happy. That’s what I want to share.”

Most pieces are in the works for a couple years. Scott goes through phases. He’ll only have the energy to focus on tattoo work, then occasionally, his wife yells at him for being lazy. So he finally gets a fire in his belly about finishing stuff because unfinished work makes him feel miserable, and completing work is so satisfying. In his work, there’s a level of cohesion that he knows people have noticed, and wasn’t necessarily intentional, but is all tied to his personality, and most of the pieces express certain “adult” issues that he’s struggled to decipher.

I inquired about what inspires him regularly. He said he’s cut back from using social media and has been looking locally, mostly. “It’s where I live. I should find inspiration from these people.” I asked if anything stood out as a major turning point for him.

“Back in ’04, ’05, when we had the hurricanes come through, we were out of power, and everybody had their windows boarded up.” He would collect those leftover boards. “This was one of a few things that I really felt was going to directionally affect what I was doing.” He would go around to people’s houses and find that they were discarding wood he could use. “It was stained and ugly, weathered. There was just something awesome when you looked at that.” White doesn’t paint on canvas. Up until that point, he had. With those endless supplies, and being out of power for two weeks, he made painting after painting by flashlight or candlelight. “Every time I would throw a piece of wood in my truck, I would see something in it. It was like it was halfway finished already!” Everything he did after that was on hurricane wood. It was something that people who lived here could relate to. 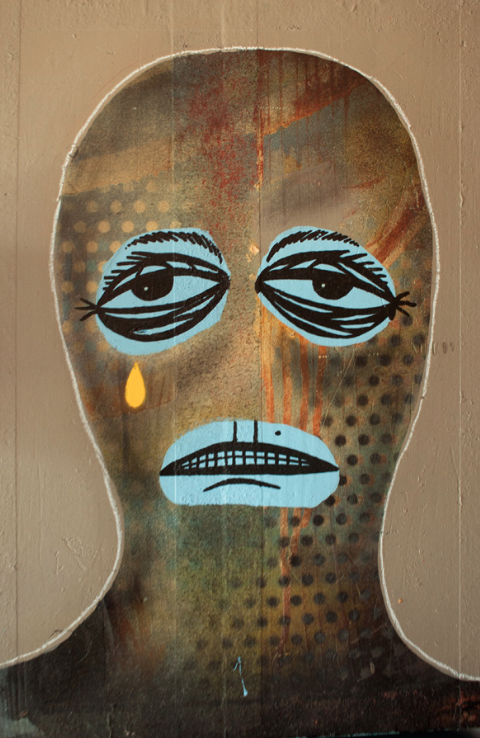 I asked him which parts of himself are most reflected in his work. I thought about when we met at Ethos and he mentioned that there was a figure he used again that he had imagined as a child. “I think that I connect a lot of happiness to that stuff. Not losing that is important. It takes you back to that point in your life when you don’t give a shit about things that aren’t important to you.” Scott sees that keeping those things around is important in life; to never grow up, and never give in. He told me that he hadn’t really thought about that before, and I was glad to have helped him realize something about his work.

As usual, I finished our interview with the question, “What’s your mantra?”

“You can only control what you can control.”

The question as to what defines art remains disputed largely due to the cyclic nature of new creative mediums flourishing. Disregarding established definitions of artistic legitimacy, these outlets END_OF_DOCUMENT_TOKEN_TO_BE_REPLACED