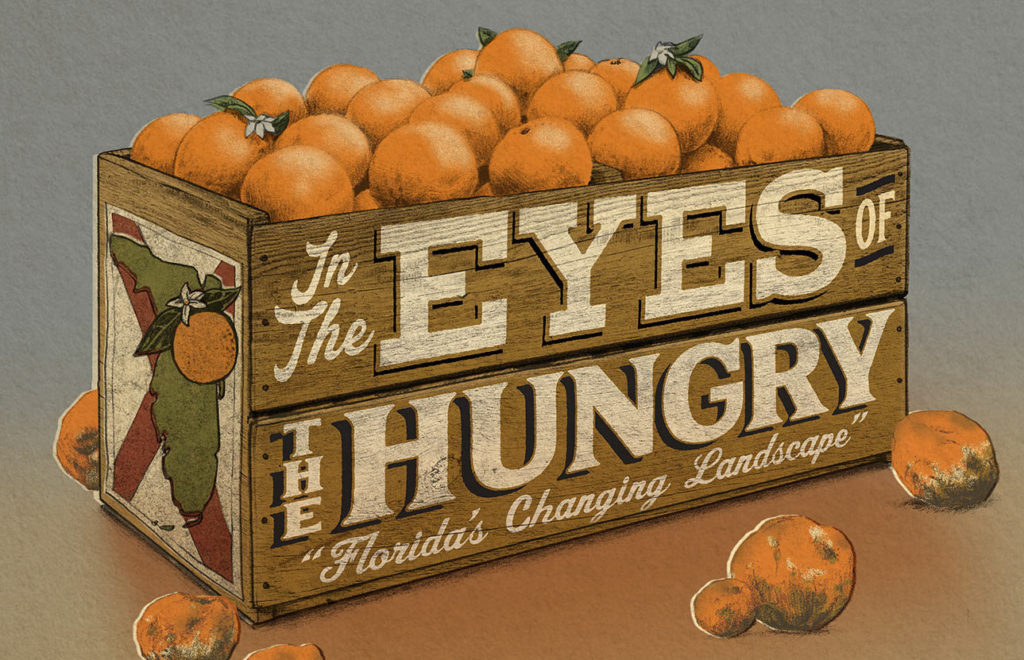 The agricultural history of Florida preserves itself within the art pieces of In the Eyes of the Hungry, an exhibition on display at the Orlando City Hall Terrace Gallery. The show’s title comes from John Steinbeck’s novel The Grapes of Wrath in which farmers face the changing landscape of economics and agriculture. Similarly, Floridians faced these types of challenges when the Caseyville sawmill closed in the 1930s, leaving residents both stranded and homeless. Migration became a way of life for these people as they tried to find a stable income during a time when Florida’s agricultural industry shifted from cattle to lumber to citrus groves. From the 1930s to the present day, farmworkers adjusted and readjusted their lifestyles according to the wellbeing of their crops, despite the rise of supermarkets in Florida. In these instances, the show uses quotes from The Grapes of Wrath to help establish a sense of remorse for the hardships of both the past and present. 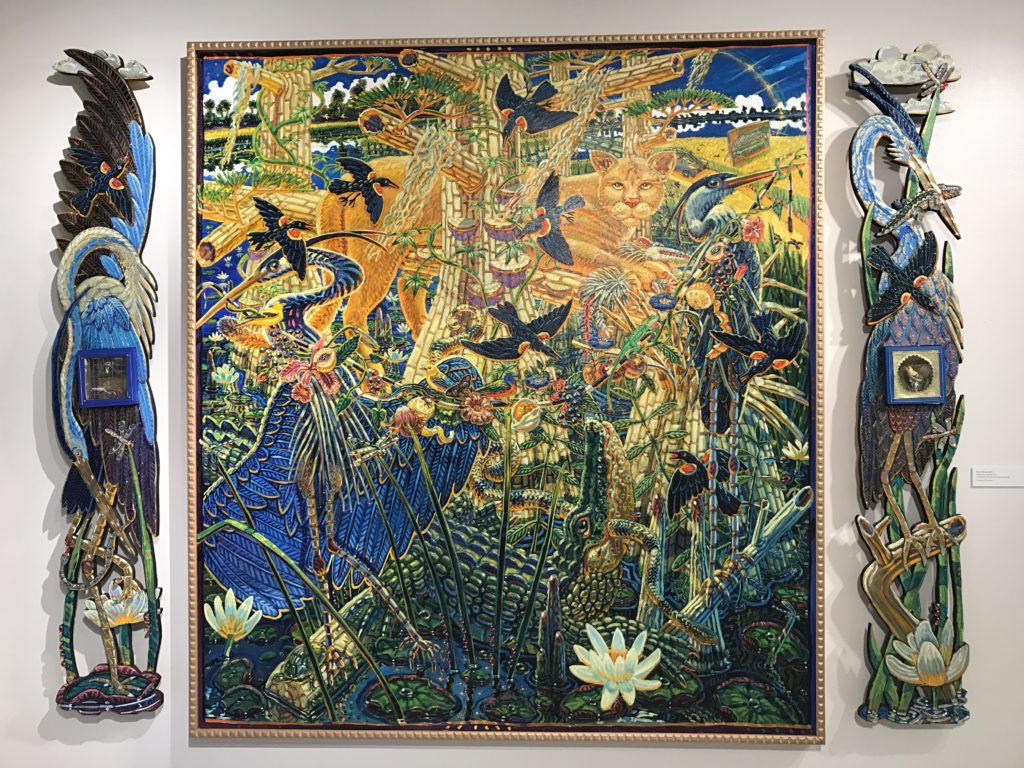 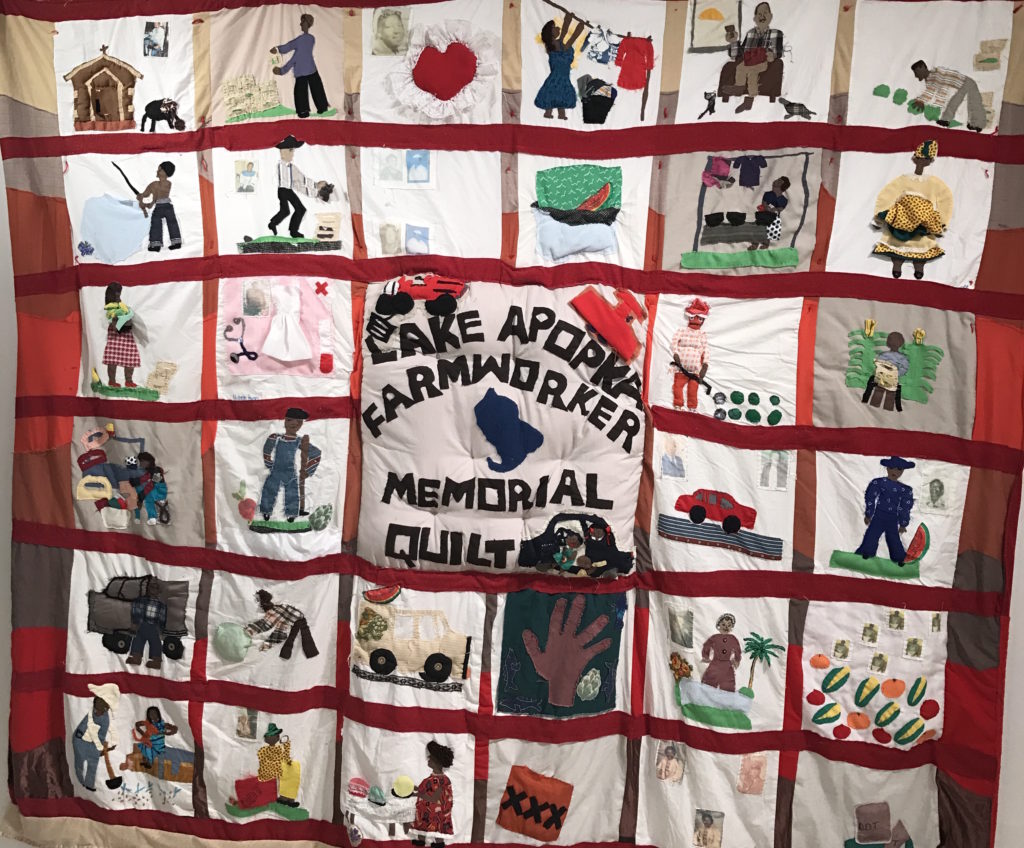 The exhibition begins with two quilts made by the Farmworker Association of Florida in 2009. The Lake Apopka Farmworker Memorial Quilts commemorate the workers who lost their lives due to the harsh conditions in which they harvested crops. These pieces use stitched figures and photographs of the deceased to foster a connection between the viewer and the most recent past. A connection that alludes to the feeling of guilt—as the viewer benefits from the immediate and facile access to food, like the barbecue restaurant next door to the gallery, the farmers who procure that food suffer through the effects of pesticides and polluted water. 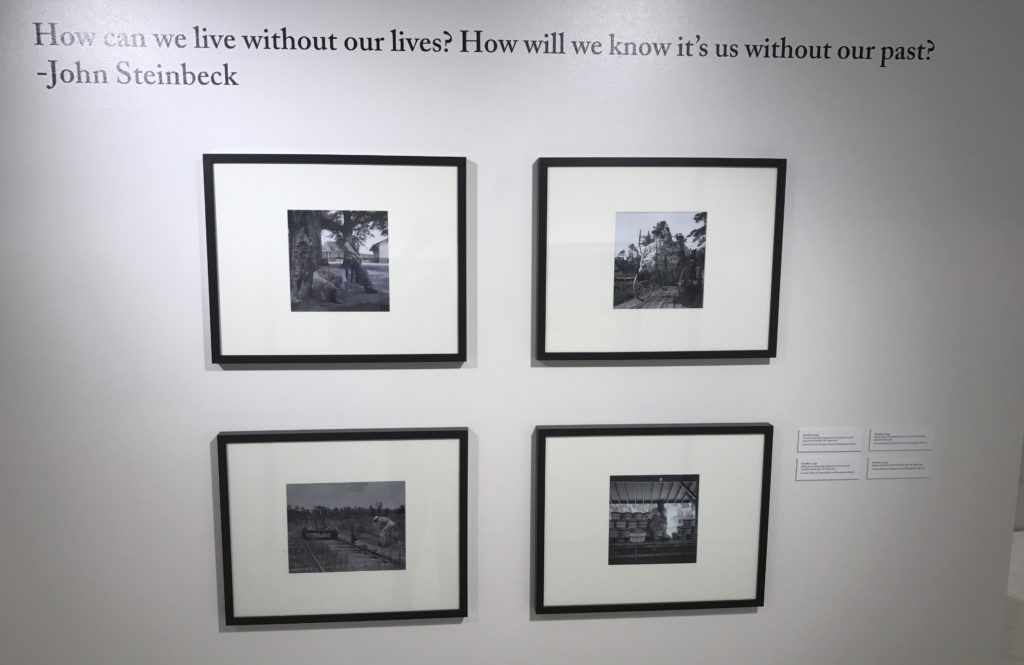 During the 1970s, Lake Apopka began to earn the title of a “dead lake” due to its pea green color and lack of fish. The neighboring wildlife suffered through a decline in bird and alligator population due to organochlorines, a pesticide that came from the farmlands. In both of Mark Messersmith’s mixed-media works, the artist depicts cranes, alligators, and snakes all struggling to stay alive. The animals in Messersmith’s Machinery of Summer at first seem invincible, imbued with radiant colors and content expressions, but in the background a vehicle carries away an alligator’s corpse. Meanwhile, the animals in Those Left Behind flee from their habitat and into the traffic-infested streets because of the deforestation of their homes. In the center of the painting lay a palette and a book of landscape paintings. This imagery presents a theory that perhaps people can only enjoy nature in the context of art and not in its actual existence. 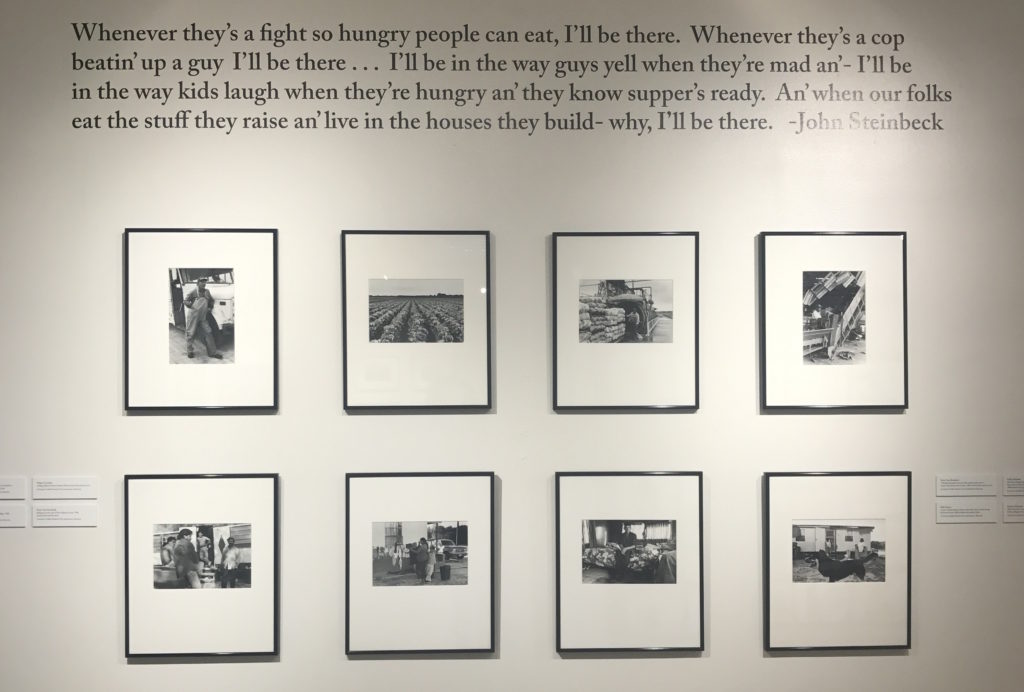 Altogether, In The Eyes of the Hungry presents the struggles that both humans and animals face due to the changing landscape of our state due to changes in the agricultural industry. Migration becomes a way of life for man and beast as their existence faces extinction due to either industrial growth or the pollution that is a result of industry. The show allows the viewer a glimpse into these plights and a chance to understand a history that might not otherwise be told.

In The Eyes of the Hungry is curated by Keri Watson, Assistant Professor of Art History at UCF. The exhibition was made possible by the Big Read, a program of the National Endowment for the Arts. The exhibition was at the UCF Art Gallery from February 27-March 3, and is now on display at the Orlando City Hall Terrace Gallery through April 23.

3 thoughts on “In the Eyes of the Hungry: Sponsored by the NEA and Inspired by John Steinbeck’s Grapes of Wrath”

The smell of orange blossoms is a strong part of my childhood memory. There were several acres of orange groves next to my junior high school. Kids used to smoke cigarettes, pot, get intimate, END_OF_DOCUMENT_TOKEN_TO_BE_REPLACED