I saw Sylvia Longmire for the first time at Stardust Video & Coffee where the local Sanford author was reading in a storyteller’s showcase. I watched as she captivated the audience with sass and sauce. Weeks later, I asked Ms. Longmire to meet me at Spacebar for a Vita Luna coffee.  I knew she was a writer, but over the course of our two-hour conversation, I learned that she’s so much more than that.

Sylvia Longmire is both a freelance writer and published author. She’s a border security expert who has appeared on major news outlets like MSNBC, CNN, Fox News, and BBC. She’s also a singer, single mom, successful entrepreneur, founder of a non-profit organization, and a medically retired military veteran living with multiple sclerosis. I learn she’s Ms. Wheelchair Southern USA, and in the running for Ms. Wheelchair USA 2016. I leave the bar buzzing with caffeine and inspiration. I have a new hero.

Fast-forward a few months. We meet again over another Vita Luna beverage, this time in the coffee shop’s new home at the District at Mills50, a co-op close to Virginia on Mills. Longmire has just returned from a solo road trip across the United States—a victory lap after being crowned Ms. Wheelchair USA, a title she secured with the performance of a stunning, three-minute slam poem. 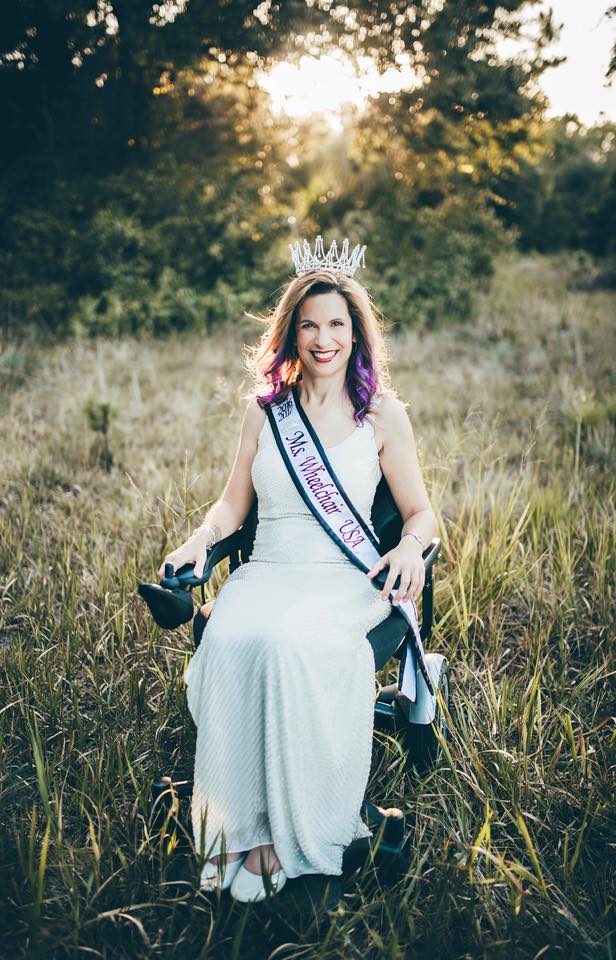 photo by Nick and Lauren Photography

We snag a table and I ask her about her next big adventure: Iceland. She booked the trip through a tour company run by her friend, Cory Lee, a paraplegic travel blogger. “Part of the interesting adventure that comes with traveling when you’re in a power chair, or a scooter, or anything, is the variety of levels of accessibility everywhere.” At this point in the conversation, she lights up.  “One of my goals, while I have the title of Ms. Wheelchair USA, is not just programs for kids of parents with disabilities, but just general accessibility. The thing I hear over and over and over again from able-bodied people who just don’t know is, ‘Oh, I didn’t think about it that way.’”

Longmire plans to use her new title as a platform on which to advocate for those with disabilities, and their children. “My kids are older now, but from a very early age, they’ve had to learn to do things on their own, or have had to do things by themselves. They inspire me every single day. They’ve gotten older and become more independent. I’m so proud of them. They make their own meals. They wake up and get themselves dressed for school. They’re incredible, independent kids and they’re only eight and six.”

Inspired, Longmire founded the PreJax Foundation, a 501c3 nonprofit that exists solely to provide college tuition assistance in the form of $1,000 scholarships. According to the organization’s website, scholarships are awarded to exceptional students who either have a parent with MS or have, themselves, been diagnosed.

“I had been wanting to give back for a while,” Longmire recalls. “I don’t know how the scholarship idea came about, but probably because I was serving in Tucson, and I was serving on education committees for both the Tucson Chamber of Commerce and the Tucson Hispanic Chamber of Commerce. I’ve always been a strong proponent of education; I went to college on scholarship.”

More information about Sylvia Longmire’s 501c3 may be found at www.theprejaxfoundation.com. Her competition winning slam poem lives on her YouTube channel, smlongmire, and you can follow her adventures on Facebook @mswheelchairUSA2016. Further information regarding her border security work can be found at http://www.longmireconsulting.com/ and on Twitter @DrugWarAnalyst.

At first glance, Bo Bartlett's work doesn't look like anything new. His large canvases are filled with the crisp realism of Edward Hopper, the small-town iconography of Norman Rockwell, and the END_OF_DOCUMENT_TOKEN_TO_BE_REPLACED