In 2007, Military Times reported that on average, 22 American veterans commit suicide daily. Michael Moffett cited this statistic in the first three minutes of our conversation. 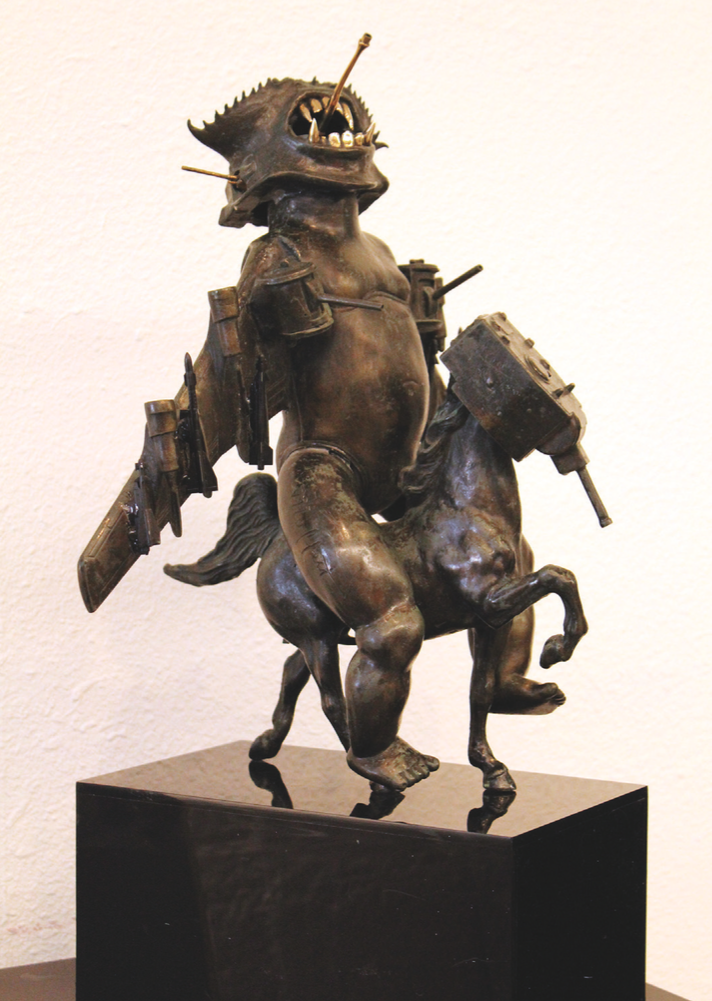 He remembered the night he was called out of his foxhole; Moffett’s CO came to say he was wanted at HQ, so the kid humped through the dark jungle and over wet terrain to the bunker a mile away. It was ’69, hostilities were ramping up, and the chaplain who was there said with brass, “Your mom wants to talk to you on the phone.” She told him to come home because his dad wasn’t well. The CO said a chopper would bring him to Da Nang in the morning. Several days later, he was on Merritt Island, Florida by his dad’s bedside in their family home. He visited for a minute, then went to take a nap, “’cause I was dead tired,” and woke up—but his dad never did. Sobbing, Moffett reflects, “He waited for me.”

In 1980, a Today reporter quoted him saying that combat experience is something he always carries and it comes out continuously through his art. “I don’t think about it as therapy, this is just what I do. It’s what motivates me to get out of bed.”

“When I came back from Vietnam, I was so disconnected from my high school friends.”

The draft was a classist perpetrator. If a family could afford auxiliary schooling, their child avoided jungle massacres. “They don’t get it,” he said of his white classmates with a lot of bread who never saw shit.

After attending Ringling College of Art and Design for two years of artistic education courtesy of the GI bill, he worked welding the massive machinery that steams agri-business’ growth. Just something to make money.

He started a bronze foundry partly for the studio space and did spot welding to help pay the bills.

Along the way, Moffett became friends with a councilman in Cocoa Beach, Florida, who commissioned a bronze drinking fountain for their park as public art, stipulating only that “it couldn’t be phallic.” Michael created his Fountainhead, around which the municipality organized an art festival, whose centerpiece was the fountain’s unveiling in a ceremony with the mayor and dignitaries one sunny afternoon in ’81. Reporters waited with cameras poised. “The look on that lady-mayor’s face was priceless.” 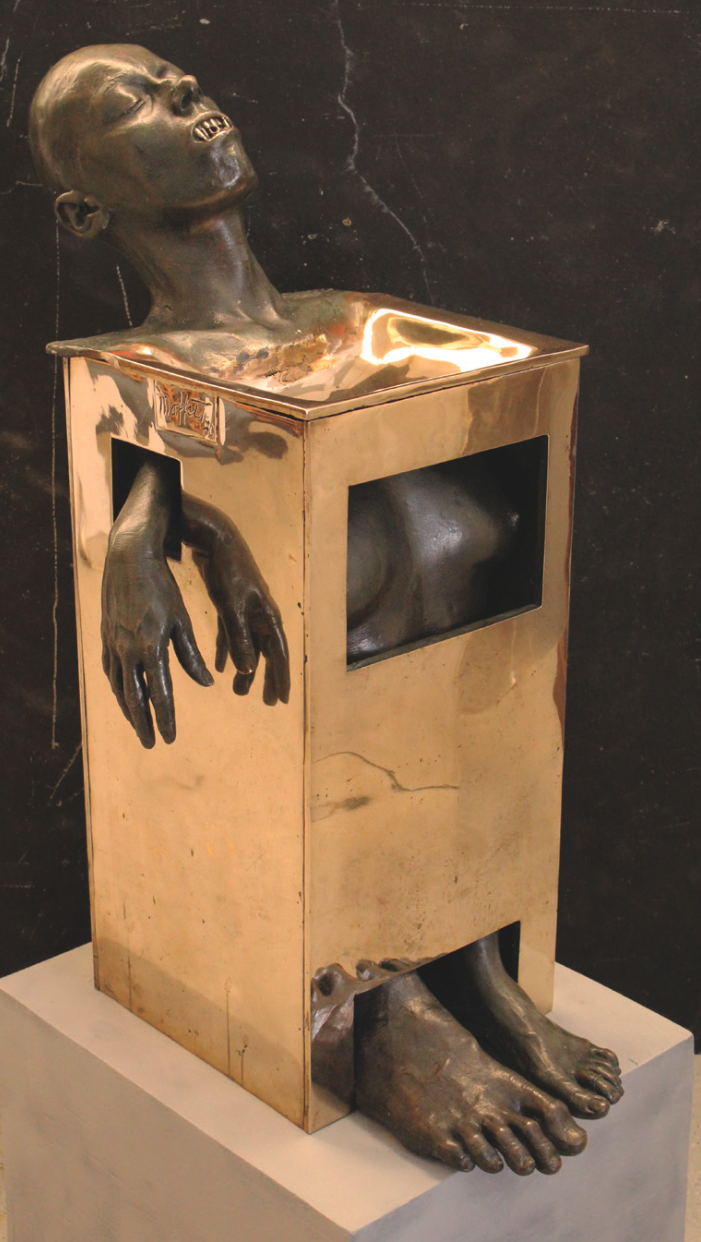 Fountainhead included parts cast from four people including the feet of “an 8-foot-tall giant” and a friend’s breasts. Perhaps the most provocative element, title notwithstanding (“nothing to do with Ayn Rand,” Moffett asserts) is the water spout: his ex-wife’s mouth wearing vampire fangs, obliging the drinker to use the fountain mouth-to-mouth style.

Moffett spun in a flurry of publicity and eventually bought it back from the city, which deemed Fountainhead “too macabre” for display. It has been listed on eBay since 2014 for $250,000.

“I had it listed for a quarter-million? Well, for that I’d consider selling.”

“I’ve been in a situation where you just see a thing and keep the snapshots of combat. And you can see it in your head afterward, just like a photograph. I can see it clearly, different images are always there—it’s not a horror story, it’s just a picture.” 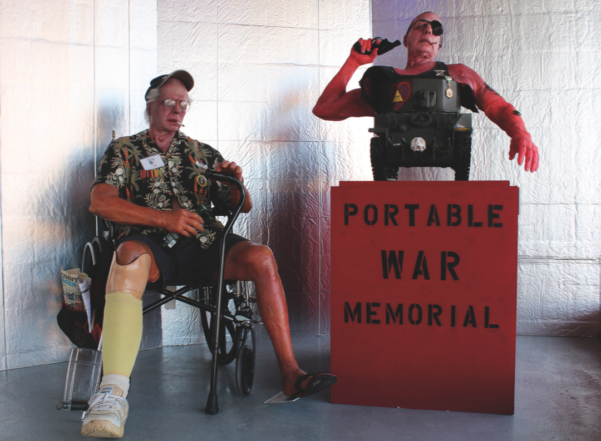 The Portable War Memorial is actually two sculptures for which he won Best in Show at the Orlando Museum of Art’s First Thursdays event last November. He first made PWMI: a man committing suicide mounted on a remote controlled tank. It was on his mind after so many comrades took their lives over the years. The gun to his head—pulling away with a twisted grimace—is a sculpture that Moffett has made at least twice.

The surreal tank/suicide vet of PWMI counterbalances his hyperrealistic wheelchair vet in PWMII. He used himself as the model for both works. Mike, his son, helped with casting. Moffett passes off using his own body for the grittiest elements by paraphrasing Frida Kahlo, “I’m the only one who is always around.”

Eventually, Moffett shaved his head to implant every hair individually in the statue’s silicone skin and utilized mail-ordered WWII-era glass eyeballs—prostheses that were not interred with corpses— from Germany.

Moffett’s wheelchair doppelgänger has a prosthetic leg that came from a yard sale, “I used it just the way it came to me, with that sneaker.” He conceived of the man as a homeless “vagabond veteran” and wants to plant it someplace on the side of the road “as a statement.”

“The piece really is to bring attention to the fact that there’s a lot of anguish and angst. You never know what’s going on with somebody. They look like they have no problems and have the world by the balls, but they might be losing it underneath.”

Artistic Suicide is another of Moffett’s cast heads, in the act of blowing out his brains.

“I got a lot of things to do, and miles to go before I sleep. Like in Peter Pan, Captain Hook has the croc with the ‘tick-tock’ always chasing him; that’s the way I feel—I know time is running out.”

Moffett tends not to be direct about his message, allowing the “viewer to bring their own energy” to the experience, and read in where they will.

Photos by Zen Moffett
You can see more at: MoffettArt.com

Walking into Kyle’s indoor studio space, we were faced with a large painting of a photorealistic astronaut falling with his hand extended. Reaching up is a comic strip style woman who appears to be END_OF_DOCUMENT_TOKEN_TO_BE_REPLACED