Civilized societies in the 21st century have no need for knights in shining armor riding upon valiant steeds. The Middle Ages were a time of darkness, plague, and war and champions were needed to defend lands and kings. Knights were the superheroes of their time, riding off to battle clad in magnificent suits of armor and bearing splendid crests upon their shields. Returning from the fight was proof enough of their superhuman abilities and the stories told of these glorious warriors would quickly became the foundation for lore and legend.

Over the centuries, fact evolved into fantasy, and the allure of knighthood still permeates the psyche of modern thought. Films about King Arthur, the Knights of the Round Table, and other medieval heroes are made and remade and rebooted for every new generation. The Tolkiens, Martins, Rothfusses, and other literary wizards set their stories in fictional worlds parallel to the Middle Ages, but with more magic, quests, battles, and knight-like heroes. Despite all the fictional appropriation, certain profound themes of knighthood remain—the freedom that comes from seeking adventure and the bravery to explore even the darkest roads.

Bikers and motorcycle enthusiasts are the medieval knights of today, tapping into that same adventurous spirit. They seek nothing more than the independence to travel and live their lives as they see fit, with no one interfering or imposing any kind of restrictions. Whether traveling alone or in groups, each biker bears his or her colors and crests, much like the knights of old. This modern heraldry is rooted in the pageantry of knighthood and pays homage to all the champions who came before.

Richard Minino (aka HORSEBITES) translates this pageantry to the steeds and armor of contemporary bikers. By customizing gas tanks and helmets, Minino is dressing today’s knights as they venture out on America’s expansive highways and twisting country roads in search of adventure. Like the knights before them, bikers proudly display their colors, interests, and personal beliefs on their motorcycles and helmets with detailed artwork provided by Minino. 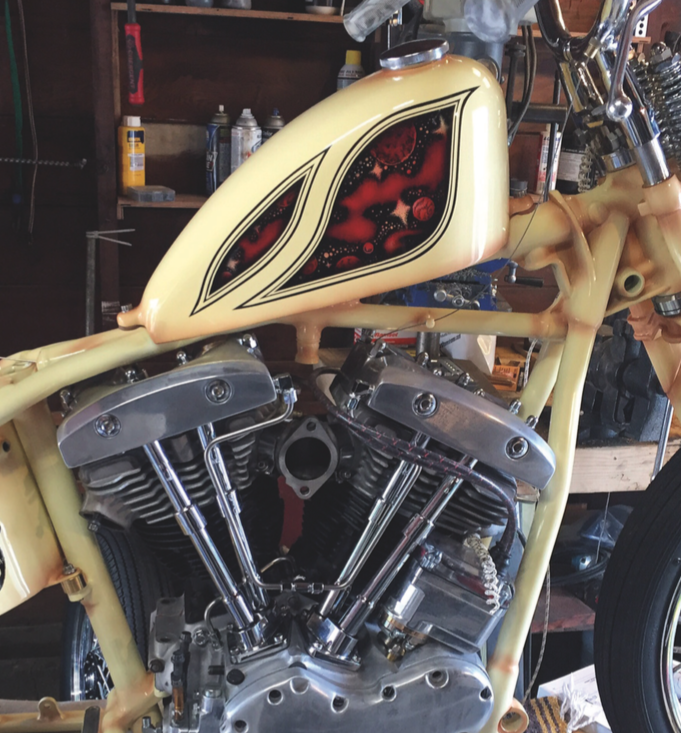 Iron Society, Sharpie panel with airbrush on off white base – complete bike

Painting a motorcycle’s gas tank is difficult and dangerous work. Consider the volatile nature of such a nontraditional “canvas”—it is a metal tank filled with flammable liquid and painted with flammable liquids. The gas tank’s placement on the motorcycle adds another level of concern.  Typically situated between the rider’s legs, the painted gas tank becomes a piece of art with the deadly potential to explode, thus maiming or killing the rider. Additionally, any drop of gasoline that touches the painted surface of the tank during refueling could permanently damage the artwork. The combination of all these perilous possibilities is part of the appeal for Minino. He explains that, “The tank is on the machine. It is permanent. You build the bike around that piece. It is the only thing you can see while on the bike. It is really like a mini gallery.”

Each gas tank and helmet painted by Minino tells a story or has a theme. It could depict a personal interest of the owner of the motorcycle or it could be a tribute to an aspect of biker counterculture of the 1960s and 1970s. Either way, the rider of the motorcycle with the personalized gas tank or the wearer of a customized helmet charges into the wild unknown bearing the colors of his or her own personal style and expressing his or her own individuality. Minino’s perspective is that, “customizing motorcycles is part of that culture and that culture likes a little flair.” 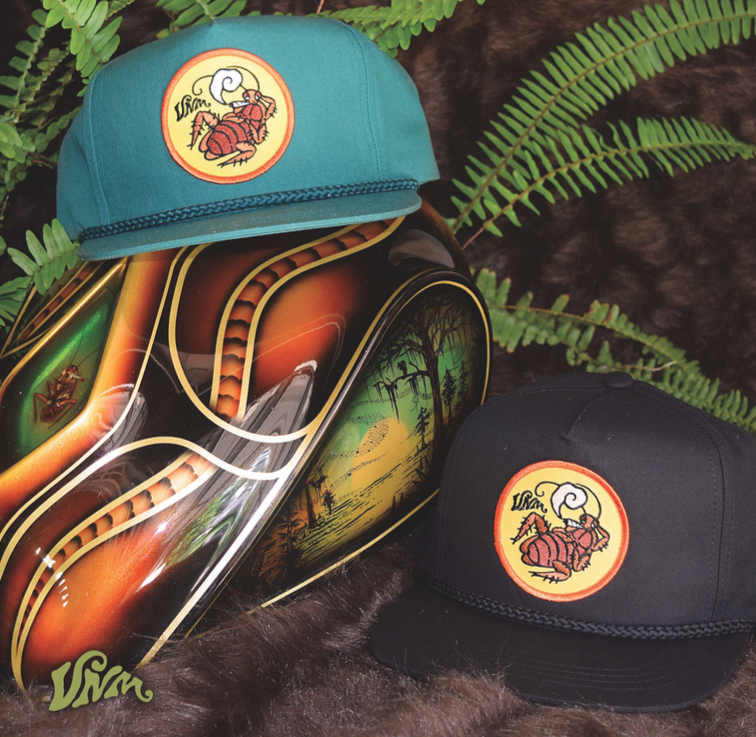 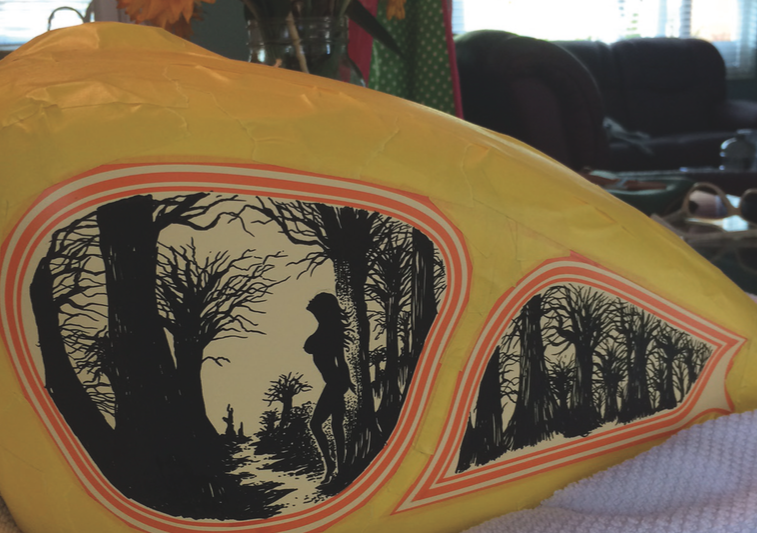 Roach Tank, a piece created for the Born Free Motorcycle Show in California in 2015, has three distinct parts that all work together to tell a very specific story. The left side of the tank depicts a landscape reminiscent of old Florida wilderness. There is a river with palm trees and some classically Floridian vegetation. It is painted with black, teals, and oranges in a style like that of the old hand-drawn comic strips found in vintage newspapers. There is a haziness in the sky, surely expressing Florida’s oppressive humidity, depicted with hundreds of tiny dots.

The right side of the gas tank illustrates a swamp sunset, complete with Spanish moss hanging from cypress trees and that pointillist haze of humidity. The teal is still present, but in this scene the orange has evolved into yellows and golds. The two sides work together to tell the story that this rider will travel from sunup to sundown and follow the river wherever it goes. 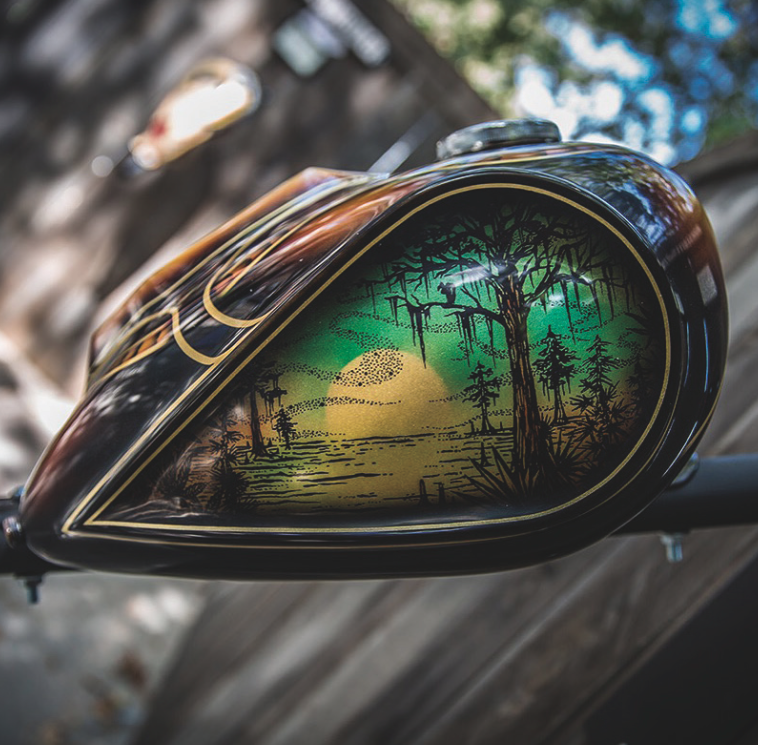 The top of the gas tank is an abstraction of golds, ambers and deep blacks. The high gloss of the clear coat makes the colors more vibrant and jewel-like. Near the bottom of the tank is an actual cockroach preserved in resin and highlighted in emerald green. On its back, one might think the roach is dead, but in fact, it is merely laying back and enjoying a toke. Indeed, the preserved roach seems to smoke a roach of its own.

What the viewer might not see the first dozen times is that the entire gas tank itself is a brightly bejeweled insect. The side panels depicting Floridian landscapes are the wings. The abstractions on the top of the gas tank are the roach’s antennae. Minino recognized that the utilitarian shape of the gas tank fit perfectly to this subtle and inventive reference and he admitted that “form and function is [his] favorite part” of the creative process. 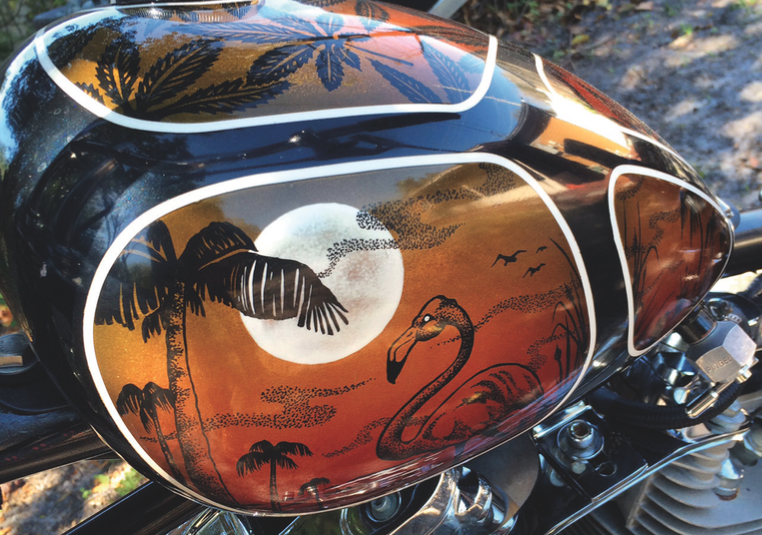 The gas tank Minino submitted to the 2017 Art and Fuel Show in Milwaukee, Wisconsin, Snake Tank, is a dangerous beauty. The greens and blacks hypnotically ebb and flow in and out of each other and lull the viewer into a false sense of serenity. But there is no peace to be found here. Amidst the fern patterns on the top of the gas tank, a predator is lurking and waiting for the opportune moment. Drawn in by the lush foliage and the mesmerizing greens and the serpentine pinstriping, the viewer becomes the prey and the snake, perfectly camouflaged amongst the ferns, prepares to strike.

What elevates this particular piece is that Minino added engraved bocote wood panels to the knee indents on either side of the tank. Each wooden piece is engraved with a detailed fern and foliage pattern that repeats the pattern painted on the top of the tank. Adding the contrasting wood element to a piece that is so sleek and smooth and glossy builds on the idea that deep in the forest, things are not what they seem. While the trees and ferns and greenery seem inviting, danger is hidden, waiting and watching. 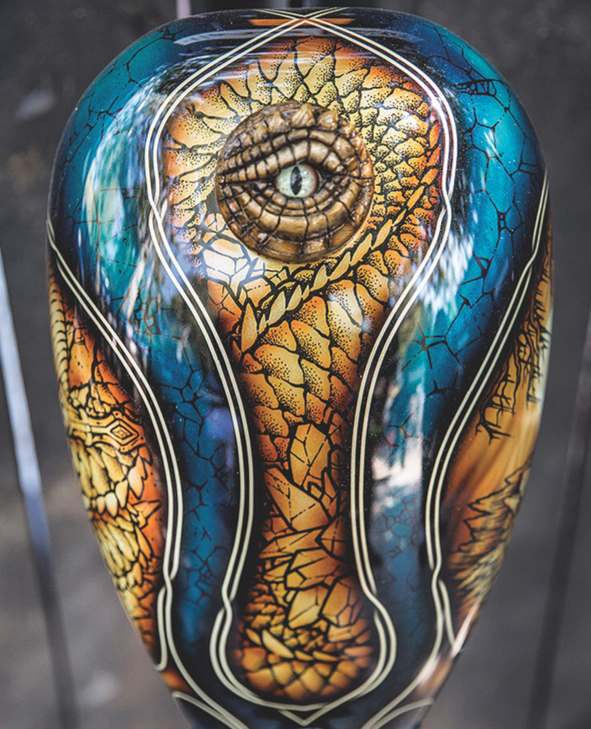 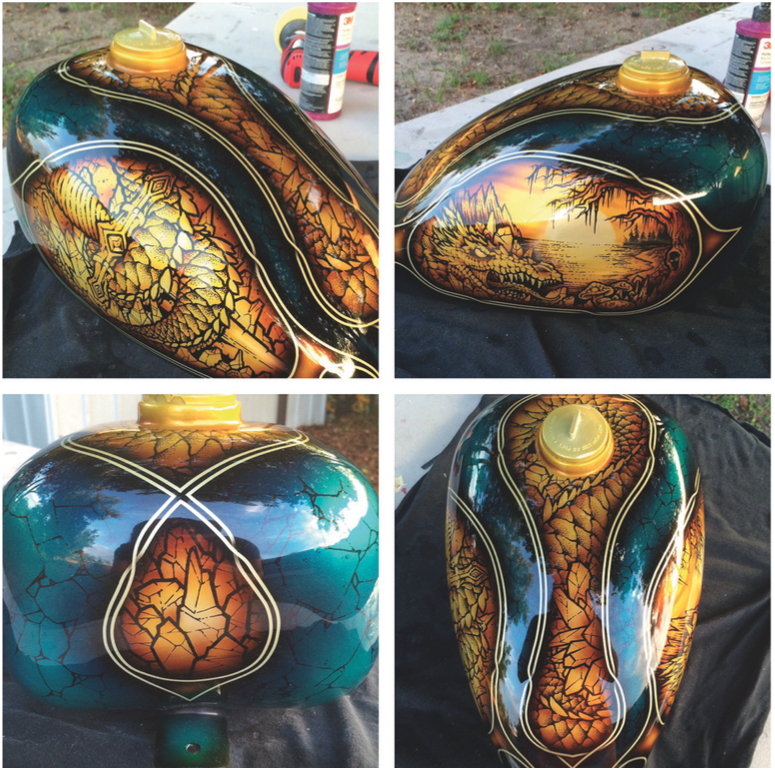 Minino’s 2016 piece, Dragon Tank, is grand, intimidating, and just as powerful as the mythical creature he depicts. Golds and jewel-tone blues are eloquently juxtaposed via pinstriping that slithers its way around the tank. The left side of the tank reveals that the dragon has its tail wrapped around a sword, while the right side of the tank exposes the dragon’s threatening head, mouth open, teeth bared. The dragon stares out at the viewer with a look both inviting and menacing, almost taunting the viewer to reach for the sword, ready to devour anyone who does. 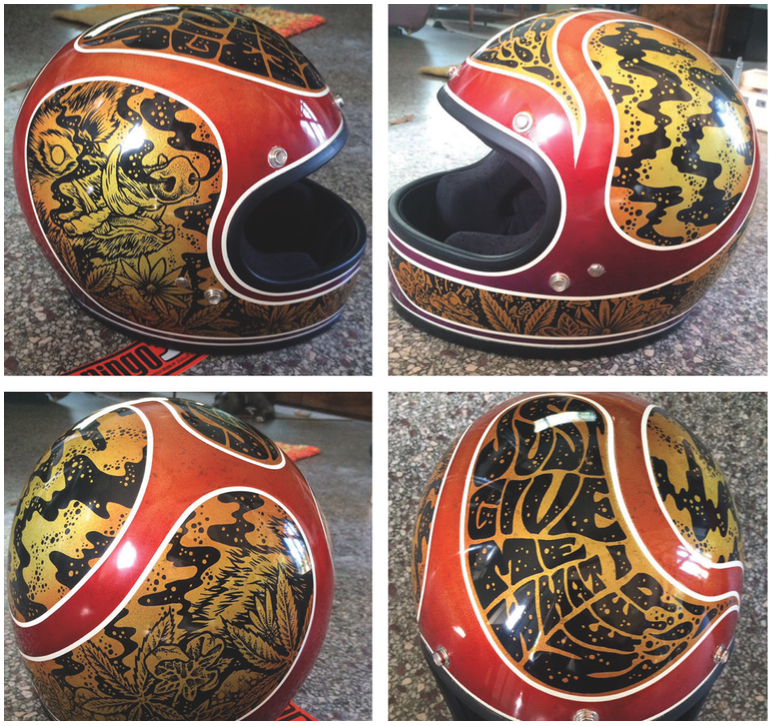 In the painting alone, Dragon Tank is clearly humming with life, but there is more. Positioned on the very top of the tank, Minino has sculpted the gas cap into a single, scaly eye that stares up at the rider, unwavering in its glare. The gas tank awakens and the roles begin to shift. The rider remains a knight, but now the purpose is not to slay the dragon, but to ride it.

In his most recent piece, a 2017 Subrosa BMX bicycle, Minino takes modern heraldry from sheer pageantry to the tournament fields. Painting a bicycle used for competitive sports ups the ante for the rider of the bicycle. Not only does the rider wear his or her colors for identification, but also for recognition. The rider’s fans must be able to recognize their champion quickly and easily so that they can cheer the rider on to victory or agonize with the rider in defeat. 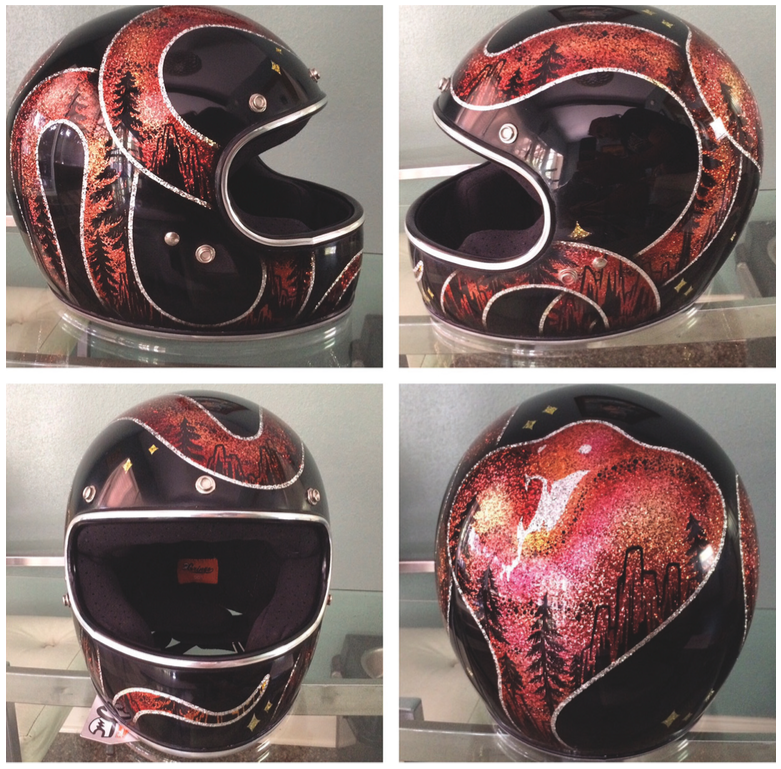 Snake Mountain, Biltwell helmet with airbrush over metal flake base

Minino’s trademarks are evident and no less commanding in this new format. While the gas tank has been swapped for tubes, the characteristic earth tones of golds, coppers, and greens are all present and just as impactful. His creative pinstriping highlights images of foliage, complete with mushrooms and marijuana leaves, and patterns suggestive of small stones at the bottom of a riverbed. Minino’s effortless ability to adapt his work to different surfaces reinforces his perspective that, whether gas tanks, helmets, or bicycle frames, in his mind they are all “just another canvas.”

Knights are a romantic icon of a past age. Heroes no longer ride on horseback through a cinematically-perfect countryside to defend the helpless or to defeat mythical dragons. All that remains are the fantastic tales of their adventures and the armor they wore defending land and liberty. Richard Minino’s artwork ensures that, not only the legends, but the very souls of heroes past live on in the heraldry of modern motorcycle culture as today’s bikers carry their colors and their crests into the future.

The type of curating that happens at Atlantic Center for the Arts is quite different from the type most are familiar within the art world, where a curator selects and works on a presentation for an END_OF_DOCUMENT_TOKEN_TO_BE_REPLACED